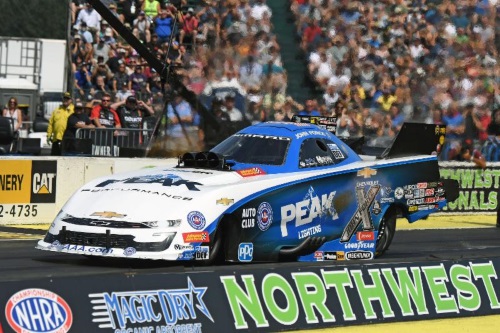 KENT, Wash. (August 4, 2019) — For the 35th consecutive year, 16-time Funny Car world champion John Force will end an NHRA professional season in the top 10. At the conclusion of qualifying at the Magic Dry Organic Absorbent NHRA Northwest Nationals, Force, who will start race day from the No. 4 position thanks to a Friday night run, had clinched a spot in the NHRA Mello Yello Countdown to the Championship, NHRA’s six race playoffs, giving him a chance to earn an unprecedented 17th world title. 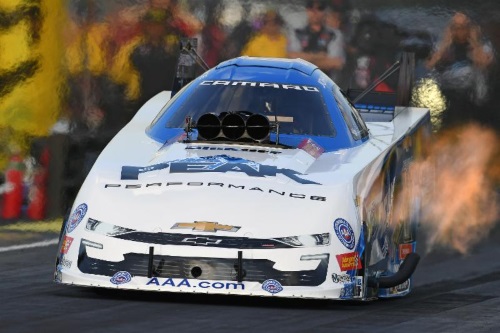 “In my career I’ve raced with the best of the best. It’s probably the toughest competition now than I’ve seen in a long time,” Force said. “To make the Countdown is our job. It’s what we’re supposed to do for PEAK, Chevy, Auto Club, Advance and Carquest, Montana Brand / Rocky Mountain Twist and all of our sponsors. I always worry about it, so I’m proud to have made it, and to have made it for the last 35 years straight.”

Coming into the final day of qualifying with one full pass, John Force took his PEAK Coolant and Motor Oil / Lighting Chevy Camaro to a 3.951-second run at 323.19 mph in the third qualifying session after hazing the tires at the top end. In his last qualifying run, the driving legend made a steady go down track powering his hot rod to 3.931-seconds and 327.27 mph. He would secure his No. 4 qualifier off his 3.891-second pass at 328.86 mph from Friday afternoon. Force will face-off with Jim Campbell in the first round on Sunday.

“Any time you race (team owner and crew chief for Jim Campbell) Jim Dunn you have to be on your toes. He’s a savvy racer who goes back with me to my early days. We’ll just take it tomorrow; we want to focus on winning round to round,” said Force. “We have a race car that’s starting to run, this PEAK Lighting team is starting to have consistency. If I do my job and everybody does their job, maybe we’ll get that win. It’s coming.” 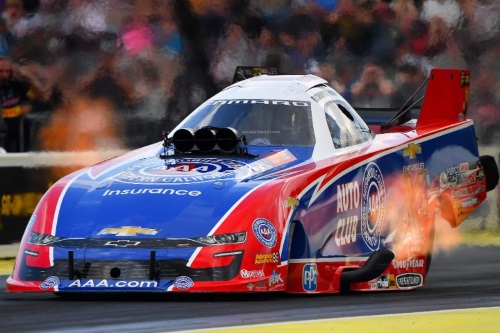 Robert Hight and the Auto Club Chevy team will start race day at the NHRA Northwest Nationals from the No. 5 spot after showing off the consistent performance of the Jimmy Prock and Chris Cunningham tuned hot rod when they strung together four impressive qualifying runs.

After 3.916 and 3.907-second passes on Friday, the two-time Funny Car world champion started Saturday’s qualifying with a clean 3.963-second pass at 325.53 mph that earned him a bonus point for third quickest of the round. In his second pass of the day at Pacific Raceways, Hight propelled his 11,000-horsepower hot rod to a blistering 3.892-second pass at 330.96 mph to go quickest of the session, pick up three bonus points and land his Auto Club Chevy in the No. 5 spot. Making his 344th race day start, Hight will be competing for his second win at the facility, sixth of the 2019 Mello Yello tour and 51st of his career.

“Well, we didn’t qualify No.1 this race but I think what’s most important, and this is going back to Sonoma, is going down the track all four runs of qualifying. It’s not just going down the track, they are very respectable runs,” said Hight who will pair up with Blake Alexander in round one tomorrow. “That’s 12 runs in a row for us, that’s how you get good, how the crew chiefs get their confidence, how I get my confidence as a driver. It’s another tough day tomorrow but we’re looking for 51, let’s see if we can get it done.” 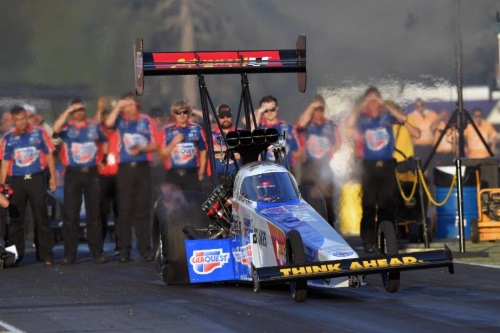 After hitting their marks in qualifying on Friday, Brittany Force and her Carquest Brakes team were able to use Saturday qualifying to test. David Grubnic and Mac Savage were economical with their final two sessions of the Northwest Nationals qualifying. Two half-track passes gave the veteran crew chiefs valuable information that they’ll put to use not only for race day at Pacific Raceways, but further down the line as they compete for a championship in the NHRA Countdown.

In their first pass of the day, Force ran 3.951-seconds at 238.51 mph and in the final qualifying session, the Carquest Brakes dragster crossed the line at 3.815-seconds and 268.87 mph after two planned half-track shut offs. The 2017 Top Fuel world champion will start eliminations from the No. 2 qualifying position off the efforts of her 3.702-second pass at 326.87 mph Friday night. She’ll compete against Ron Smith in the first round.

“I’m feeling good going into race day tomorrow. Sitting in the No. 2 spot which is a great position to be,” Force said. “This Carquest Brakes team, we’re coming up on the last two races before the Countdown so we did a little testing today so we can start turning things around and start getting things going this weekend in Seattle by going some rounds tomorrow.” 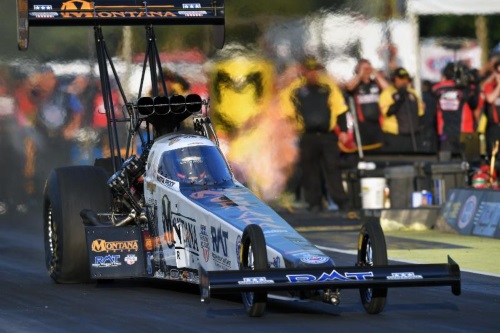 Austin Prock and the Montana Brand / Rocky Mountain Twist team are heading into race day in the No. 12 spot after their solid 3.778-second pass at 323.12 mph from Friday night. Prock kept his performance consistent throughout Saturday’s sessions first laying down a 3.827-second pass at 320.97 mph followed by a 3.810 at 316.75. The first-year driver is set to go head-to-head with Leah Pritchett in round one.

“It was a decent day of qualifying for this Montana Brand / Rocky Mountain Twist dragster. We made two really consistent runs which is good but I think Mike Green, Ronnie Thompson and the guys were looking for a lot more. I didn’t help it much, I had this her all over the center line in the last run,” Prock said. “We’re going to keep picking at it and go out tomorrow looking to kick some butt, go some rounds and finish the Western Swing off strong.”