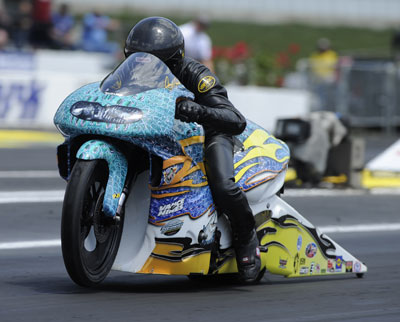 From an outsider’s perspective, one could stand to reason that Pro Stock Motorcycle’s Jerry Savoie might be a little on edge.

Savoie, who moonlights as an alligator farmer in his hometown of Cut Off, Louisiana, is currently in 10th in the points standings and holds just a 23-point lead over Scotty Pollacheck for the final spot in the NHRA Mello Yello Drag Racing Series Countdown to the Championship. But instead of nerves, Savoie is calm and confident heading into the key stretch of the regular season.

That could bode well for his performance during this weekend’s 28th annual NHRA Sonoma Nationals at Sonoma Raceway, where Savoie believes he could make a big move in the standings. 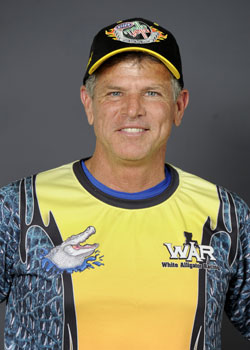 “I would like to be in the top 10, but I’m out there to race, have fun and try to win,” Savoie said. “We think we’ll do well this weekend and then hopefully we’ll go to Indy in a couple races and try to seal the deal. For me, this is all fun. I love this and I do it because I love Pro Stock Motorcycle racing in the NHRA. This is where the top racing is and where I love to be. I am having fun, enjoying myself and I wouldn’t want to be anywhere else.”

Khalid alBalooshi (Top Fuel), Courtney Force (Funny Car), Jason Line (Pro Stock) and Eddie Krawiec (Pro Stock Motorcycle) are the defending winners of the event, which will be televised on ESPN2. The race is the eighth of 16 during the 2015 NHRA Pro Stock Motorcycle season and only two events follow it before the Countdown to the Championship.

But it doesn’t sound like Savoie, who lost in the first round last weekend in Denver, is too worried about falling out of the top 10. His Savoie’s Alligator Farm Suzuki has shown impressive power this season, with Savoie winning one event earlier this season in Englishtown.

Racing in the beautiful wine country of northern California also presents an ideal situation for Savoie, who was the No. 1 qualifier at the track a year ago and has always enjoyed racing at the scenic venue.

“The Suzuki bikes run really well at sea level and I feel like I have a strong chance of running well this weekend in Sonoma,” Savoie said. “I’ve been looking forward to this race for quite a while. It’s one of the elite tracks of the whole series.”

It’s also a track that could yield impressive performances if the conditions are right and Savoie has a major one in mind if the ideal situation presents itself this weekend.

“I want to be the first to go 200 mph and Sonoma is one of those places where you could do it,” said Savoie, who has two career victories. “We showed some good power in Englishtown and it shocked a lot of people, us included. We’ve been working on and discussing a lot of different things, but you just have to find that sweet area and see what happens.”

The race itself is an important one, but Savoie will also be competing in the NHRA Pro Bike Battle, a specialty bonus event for the Pro Stock Motorcycle category. The event will take place on Saturday and feature eight riders vying for the top prize. Pro Stock Motorcycle riders began earning points for the event at last year’s NHRA Sonoma Nationals.

His first-round matchup will be against 2013 world champion Matt Smith in what could be a big weekend for the talented rider. Savoie also knows that doing well during eliminations on Sunday could pay off later this season.

Of course, Savoie will have to get by a talented Pro Stock Motorcycle field led by defending winner Krawiec, who is the current points leader and won last weekend in Denver. Other standouts include reigning world champion Andrew Hines, perennial contender and 2013 race winner Hector Arana Jr., who won in Chicago, Karen Stoffer, who has two wins this season, Matt Smith, Jim Underdahl, LE Tonglet, Chaz Kennedy and Hector Arana.

“If we do well this weekend I feel like we could be locked in pretty good for the Countdown,” Savoie said. “It’s not like we don’t have a bike that’s barely getting in. The engine has been doing well, but we’ve been having some serious, serious clutch problems. After we won in Englishtown we lost on holeshots in two straight races. We worked on some things in Denver and I feel confident that it will carry over to this weekend. We should be in good shape.

“Anytime you start doing well you want to carry it over because just as fast as you’re on top you can be on the bottom. You just want to carry the momentum over, carry a low profile and try to shock the world.”

In Top Fuel, Sonoma presents the ultimate opportunity for a driver to set the stage for a championship run. Reigning world champion and current points leader Tony Schumacher (2007 and 2008), Larry Dixon (2008), Antron Brown (2012) and Shawn Langdon (2013) have all claimed victories at Sonoma during their championship seasons and all four are title contenders once again. Others to possibly add their name to that list include perennial title contender Doug Kalitta, a five-time Sonoma winner, reigning Auto Club Road to the Future Award winner Richie Crampton, J.R. Todd, Brittany Force and Steve Torrence, who won the opening leg of the Western Swing in Denver.

Line’s win over V Gaines last season set the stage for an epic Pro Stock championship rivalry between the two-time world champ and Enders, who claimed her first world title in 2014. Line will be looking to tie teammate Greg Anderson, who has four wins and the points lead in 2015, for the most Pro Stock wins at Sonoma with four. Enders, 2012 world champ Allen Johnson, Denver winner Larry Morgan, Chris McGaha and talented rookie Drew Skillman all figure to be drivers to watch in the 200-mph factory hot rod category.