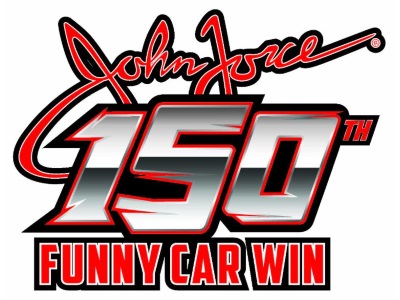 It was the Hall of Famer’s first win of the season but his record ninth at Pacific Raceways and it added another unlikely chapter to one of auto racing’s most compelling stories.

It was the 150th Mello Yello tour victory for the 16-time NHRA Funny Car champion, an accomplishment made the more remarkable by the fact that he was winless in his first 10 professional seasons (1977-1987). He finally broke through on June 28, 1987 at Montreal, Canada where he beat Ed “the Ace” McCulloch in the final round of the no-longer-contested Molson Grandnational. He’s been winning ever since and now has won at least one NHRA tour event in 32 of the last 33 seasons.

The significance of 150 tour victories is indisputable considering that the second most by any NHRA pro is 97 by retired Pro Stock champion Warren Johnson. Among active pro drivers, Greg Anderson has 93 wins in Pro Stock and Tony Schumacher 84 in Top Fuel. Second in career Funny Car victories is Ron Capps with 62.

The win was Force’s first with new crew chiefs Brian Corradi and Dan Hood, who moved over to the PEAK Camaro after directing Courtney Force, the youngest of Force’s four daughters, to four wins and a sixth place finish in the 2018 Mello Yello driver standings.

Winning alongside the legendary driver was Road to the Future Award candidate Austin Prock. It was the first victory of Prock’s career and the first time a driver with the last name “Prock” had competed in a final round since his grandfather, Tom Prock, in Montreal 1976. Austin defeated current points leader and reigning Top Fuel world champion Steve Torrence in the final round.