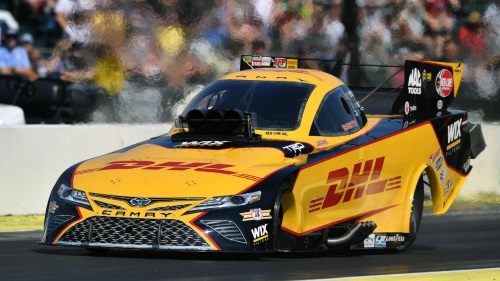 J.R. Todd and DHL Camry Race to Quarterfinals in Seattle

Throughout qualifying J.R. Todd and the DHL Toyota Camry Funny Car knew they had a great race car. They came off the trailer and picked up qualifying bonus points in the first two sessions. Their second run was only bested by one driver and the team rolled into race day as the No. 2 qualifier.

Todd took full advantage of his position as the second best Funny Car on the property by making a solid run in the first round. He was first off the line against Jeff Diehl and kept the DHL Camry right in the middle of the groove.

In the second round Todd faced off with tough competitor veteran Ron Capps. Capps had a slight advantage off the line and was able to make a smooth clean run to take out tire smoking Todd. The quarterfinal finish was a tough loss for Todd but not one that will linger with the reigning Funny Car champion.

”The performance of our DHL Toyota came around in qualifying,” said Todd. “Then we made a really good run in the first round of eliminations. We just overpowered the track in the second round. It’s really unfortunate. It would have been a good time to at least make up some ground. The last few races we dug ourselves a little bit of a hole. At least the car showed some good signs heading into Brainerd and Indy. I’m excited about the upcoming races because both last year and the year before we’ve run well at these upcoming events, so we’ll just move forward.”

Quotable:
J.R. Todd on wrapping up Western Swing: “The Western Swing is over and now my attention is going to switch to the final two regular season races including the biggest race of the year Indy. We have two wins in a row there and we are going to work on getting ready for the Countdown.” 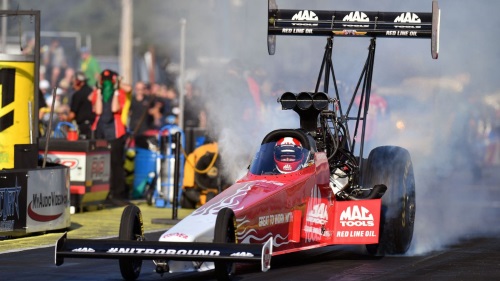 Historic Start for Kalitta Leads to Quarterfinal Finish in Seattle

On a historic day for Doug Kalitta and the Mac Tools team confidence was high headed into eliminations at the NHRA Northwest Nationals. This race was the 505th race for Kalitta moving him to the top of the list of drivers to compete in NHRA Top Fuel national events.

The first round match-up against Scott Palmer was one that Kalitta was not taking lightly against a fellow Countdown competitor and one of the toughest drivers on tour. Kalitta took a starting line advantage and never trailed in the race. His run of 3.789 seconds was quick enough to give him lane choice over No. 1 qualifier Mike Salinas in the quarterfinals.

In the second round it was Salinas who got the best of Kalitta. The tough race did not go the veteran driver’s way. The Mac Tools dragster was up in smoke early and his opponent was on a clean quick run in the adjacent lane.

“This Mac Tools team is just grinding right now,” said Kalitta. “We are working on winning rounds and this weekend in Seattle I felt good about our chances. We made a great run in the first round and just couldn’t duplicate it in the quarterfinals.”

Quotable:
Doug Kalitta on wrapping up Western Swing: “Today was a big day getting the 505th start and we would have liked to have gotten another win in Seattle. This Mac Tools team is getting ready for the Countdown and the best way to do that is to focus on the positive and move forward.” 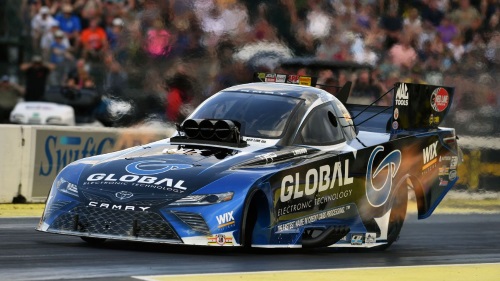 Shawn Langdon and the Global Electronic Technology Toyota Camry took advantage of the chance to solidify their Countdown position today at the NHRA Northwest Nationals. A critical first round match-up against one their chief pursuers gave the championship contending team the opportunity to control their own destiny

The No. 6 qualifier was facing Cruz Pedregon in the first round and Langdon and his Toyota team did not miss the chance to make a dominant run. Both Funny Cars left the line simultaneously but it was Langdon and the Global Electronic Technology Camry that blasted down the Pacific Raceway track with a winning time of 3.926 seconds which was one of the quickest runs of the first round. The win added 20 points to Langdon’s lead over Pedregon and gave the second year Funny Car driver more confidence heading into the final two regular season races.

In the quarterfinals Langdon was paired up with two-time Funny Car world champion Matt Hagan. Langdon’s Camry took off from the starting line and began to smoke the tires down track. As Langdon’s day came to an end he knew a round two finish was something that could improve on in Brainerd in two weeks.

“We’re working hard to get this Camry into the Countdown,” said Langdon. “We’d like to have gone a little further today, but we’re consistently going rounds now. I have to thank Steve and Samantha Bryson of Global Electronic Technology for their support.”

Quotable:
Langdon on wrapping up Western Swing: “This is a tough three week stretch. Our biggest take away is we are holding our own in the Top Ten and we are going rounds. This Global Electronic Technology Camry is quick and fast. We are getting it ready for the U.S. Nationals and the Countdown.” 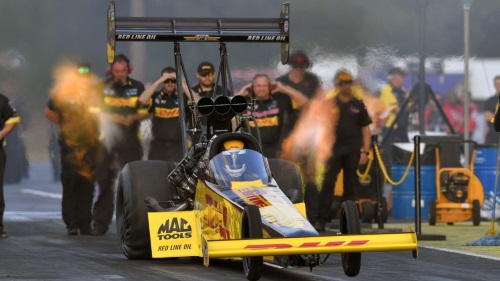 Early Exit in Seattle Fires Up Crampton and DHL Team

The DHL Top Fuel dragster and Richie Crampton were focused on a long day at the races as the No. 6 qualifier. Consistent runs and lane choice gave the DHL team a lot of confidence going into round one at the Northwest Nationals.

Paired against Antron Brown, who has won the previous three NHRA Northwest Nationals, Crampton knew he would have to be at the top of his game. When the tree flashed Crampton took off with Brown but it was immediately evident that today was not going to be Crampton’s day. His DHL dragster began to smoke the tires just before half-track as Brown was hooked up for the full run. Crampton clicked off the engine to minimize damage.

“That wasn’t the outcome we were looking for,” said Crampton. “We knew we needed to be aggressive and I think we just barely got on the other side of it. We’ll take this info and get better at the next race.”

Quotable:
Richie Crampton on wrapping up Western Swing: “We didn’t get the three wins we were looking for during the Western Swing. We are going to go back to the shop and get ready for Brainerd and then Indy. There are eight races left and a lot of rounds left to win.”