KENT, Wash. (August 4, 2019) – Terry McMillen and the AMALIEⓇ Motor Oil XTERMIGATORⓇ team struggled through the first part of the Western Swing, but hopefully have found the consistency needed to hold on for a spot in the NHRA Countdown. McMillen earned five bonus points over the past two races, yet failed to notch a round win.

“It’s the best weekend we’ve had in a long time,” McMillen said of the recent Northwest Nationals held just outside of Seattle. McMillen remains in the Top 10, six points ahead of Scott Palmer and 66 points ahead of Billy Torrence.

“It’s tight right now for the last spot,” McMillen continued. “I have to be looking over my shoulder at Scott and Billy, but at the same time I’m looking forward at Prock and Crampton. We’ve been here before. I can tell you this, we’re going to go down swinging.” Austin Prock and Richie Crampton are tied for the eight spot, 77 points ahead of McMillen.

McMillen earned two bonus points in the first qualifying session in Sonoma and then earned an additional three points with the quickest elapsed time of the third session in Seattle.

“Every point counts,” McMillen said. “We just came up short on race day. Consistency is the key down the stretch. If we can keep making consistent runs and keep improving, we’ll be right where we need to be when the Countdown starts.”

Two races remain before the Countdown. The next is the Brainerd, Minnesota, August 15-18 and the U.S. Nationals in Indianapolis August 28 – September 2 where McMillen will defend his U.S. Nationals title. 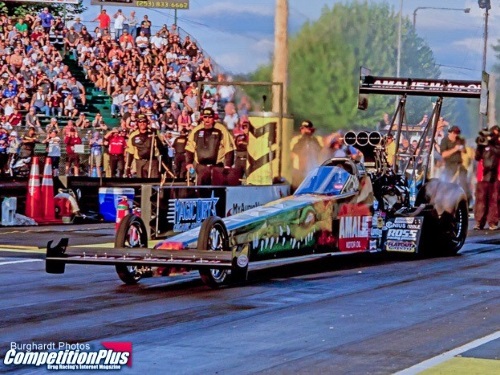