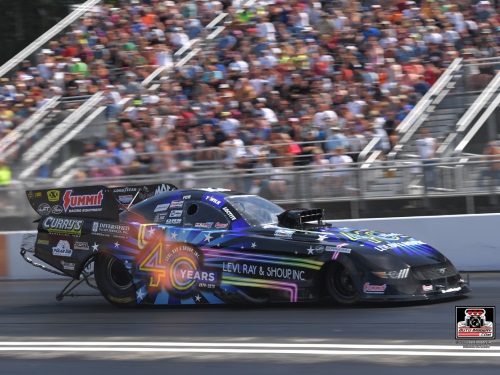 KENT, Wash. (August 4, 2019) – The Western Swing, NHRA’s strenuous stretch of races in the Western United States that take place on three consecutive weekends, is always a challenge. Tim Wilkerson had hoped for a productive set of events out West, but he came away empty handed. The consolation, though, is that he retained his position in the top 10 as the NHRA Countdown to the Championship inches ever closer. There are just two events before the Countdown field is locked.

“We lost a couple of rounds to Cruz Pedregon, and that’s what we don’t want,” said Wilkerson, who is No. 10 in the Funny Car standings. Pedregon is No. 11. “But we had a really good car these past three races. I think we’re all happy the Western Swing is over, and now we’re going to go match racing on our off weekend and then get to Brainerd with a fresh perspective.”

Wilkerson qualified No. 10 in Seattle, but the position did not truly reflect the capabilities of his powerful Levi, Ray and Shoup Ford Mustang nitro Funny Car. He made three solid 3-second passes during qualifying, but really only missed it on the fast run, the late session on Friday evening.

The 20-time NHRA Funny Car winner drew fellow veteran racer Ron Capps as his first-round opponent. In their meeting, Wilkerson left the starting line first, but the hot track did not agree with Wilk’s tune-up. He smoked the tires and Capps won their match, 3.939-second at 327.35 mph to 4.205, 253.95.

“My car was just motivating right down through there, doing it’s deal, but it just kind of bumped and moved over a little bit. When I was dragging it back, it came loose,” explained Wilkerson. “I saw Cruz smoke the tires right in front of me, and I had Richard [Hartman, Team LRS] slow it down a little bit, but it just wasn’t quite enough. I’m aggravated, but I’m looking forward to the next race.”

The next stop on the 2019 NHRA Mello Yello Drag Racing Series tour will be the Lucas Oil Nationals at Brainerd International Raceway in Brainerd, Minn., Aug. 15-18.

Join the conversation by using #NorthwestNats on social media