With a resume that already includes a handful of solid passes in the .70s and .80s, a career-best elapsed time of 3.696-seconds and top speed of 334.15 mph and a semifinal finish, Prock added his most impressive achievement to his list when he powered his Mike Green and Ronnie Thompson tuned dragster to a breakthrough victory at Pacific Raceways.

Starting race day from the No. 12 spot, the young driver strung together four solid runs taking out veteran racers Leah Pritchett, Clay Millican and Mike Salinas on his way to the first final round of his career. In the final, Prock launched his hot rod past reigning Top Fuel world champion and current points leader Steve Torrence to take home his first career Wally in a John Force Racing double up as team owner John Force earned his milestone 150th victory.

“That weekend in Seattle was just unbelievable. We got this Montana Brand / Rocky Mountain Twist dragster in that winner’s circle and we did it alongside the man, John Force. It was really a dream come true,” said Prock who is tied for eighth in the NHRA Mello Yello points standings. “We still have a lot of work to do in this dragster to get it where we want it, but that win gave us a lot of confidence.”

At this year’s NHRA Nationals in Brainerd, Minn., Prock will be competing for his second career Wally where John Force Racing teammates John Force, Robert Hight and Brittany Force have all picked up wins, as well as former JFR drivers Gary Densham and the late Eric Medlen.

“I’m excited for this weekend in Brainerd. It will be the first time I’ve entered an NHRA national event as the previous race winner. That’s super cool,” said Prock. “We’re hungrier than ever to get another Wally and I can’t wait to put on a good show for the ZOO.” 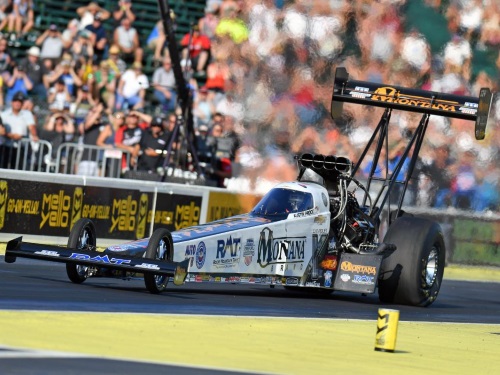