BRAINERD, Minn. (August 13, 2019) – There’s a certain affinity Ron Capps has with Brainerd International Raceway and its huge on-site campground known as “The Zoo.” After all, there is a part of the campground named after the Funny Car world champion, a corner aptly called “Capps Corner.” It’s an honor the veteran takes seriously and that is evident in Capps’ track record at the fan-favorite facility.

Capps has five career wins in Brainerd, the site of this weekend’s 38th annual Lucas Oil NHRA Nationals, the most recent coming in 2014 to finish off a stretch of three straight Funny Car wins at the track. In the midst of another solid NHRA Mello Yello Drag Racing Series season, Capps hopes to start a new streak in his 11,000-horsepower NAPA Auto Parts Dodge Charger SRT Hellcat. After all, he feels a certain responsibility when it comes to performing well in Brainerd.

“When the fans started ‘Capps Corner’ you couldn’t ask for a bigger compliment,” said Capps, who has 63 career wins. “There’s certain accolades you get, but to have a corner named after you at Brainerd in ‘The Zoo’ it ranks right up there with anything. It’s a cool thing. The Canadians that come down are so much fun, and just the people that come out, you almost have to pay them back by going out to see them. Obviously it’s paid great dividends for me on the track.”

Billy Torrence (Top Fuel), Jack Beckman (Funny Car) and Deric Kramer (Pro Stock) were last year’s winners of the event that will be televised on FOX Sports 1, including live final eliminations coverage starting at 2:00 p.m. (ET) on Sunday, Aug. 18. It is the 17th of 24 events during the 2019 NHRA season, and as the penultimate race of the NHRA regular season, Capps is fully aware of where his team needs to be heading into Brainerd.

The Mello Yello Countdown to the Championship is a month away, and Capps wants to see his team, led by crew chief Rahn Tobler, at its best. He grabbed back-to-back wins earlier in the year, adding another final round appearance at the most recent race in Seattle. It’s a good sign heading into the most important time of the year and Capps wants to keep that momentum going.

“Right around the corner is Indy and the Countdown, so this time of the year is unique and you couldn’t ask for a better race at this time of the year because it’s so fun,” said Capps, who is fourth in Funny Car points. “Everything about Brainerd just takes the edge off. You’ve got teams, like ours, that are fighting for position. We want to be race ready for the Countdown, and if you’re a little lost in your tune-up right now, you’re not in a good place.”

Capps, though, seems to be in a really good place in a loaded class. Winning in Brainerd remains an important task for him, though he’ll have to deal with the likes of points leader Robert Hight, John Force, who picked up his 150th career win by beating Capps in the final round in Seattle, defending world champ J.R. Todd and Don Schumacher Racing teammates Tommy Johnson Jr., Beckman and Matt Hagan. But Capps promises to have plenty of motivation this weekend. 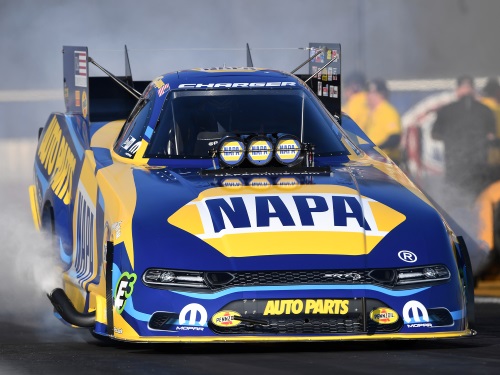 “Brainerd has a lot of deep-rooted memories for me,” Capps said. “Certain tracks you learn to balance the karma, and the karma for Brainerd is you need to go to ‘The Zoo’ and hang out with the fans a little bit. In the past it’s definitely paid me back. You don’t have to go and get crazy, but you need to go enjoy it with the fans. Every Saturday night, we go to ’The Zoo’ and I tell Tobler we’ll have him back right after the fireworks and back to the hotel for a good night’s sleep.”

Deric Kramer enjoyed a breakout season in Pro Stock a year ago, winning his first two career races. He has a win this year and will try for another against the likes of points leader Bo Butner, area natives Greg Anderson and Jason Line, Jeg Couglin Jr., Chris McGaha and Alex Laughlin.

NHRA fans can take part in the Mello Yello Walking Tour to see the teams hard at work in the pits. Fans can also attend Pro Stock Motorcycle school at 1:30 p.m. on Friday, as well as Nitro School to learn how the cars and motorcycles operate and reach their thrilling speeds. Brainerd International Raceway will host a Mello Yello autograph session and allow fans to meet their favorite drivers. Another can’t-miss experience is the winner’s circle celebration on Sunday after racing concludes. NHRA fans can congratulate the winners as they celebrate their Lucas Oil NHRA Nationals victories.

Tickets are available at the front gate of Brainerd International Raceway. Kids 12 and under are free with a paid adult. To honor the Salute to First Responders, military and first responders can save 20 percent on tickets. For more information about the NHRA visit www.NHRA.com.

WHERE: Brainerd International Raceway and Resort, Brainerd, Minn. Track is located a few miles north of the Brainerd area off Highway 371. The track is located on the east side of the highway.