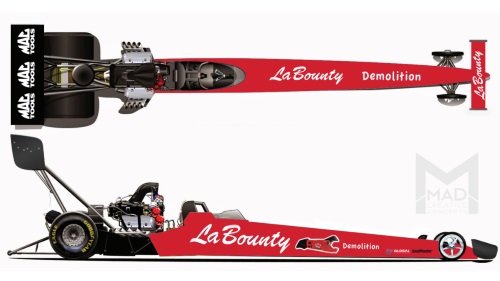 Doug Kalitta to Race with LaBounty at Brainerd Nationals

For veteran Top Fuel racer Doug Kalitta every race is the chance to make history it seems. This season he raced in his 500th Top Fuel national event and moved into the top spot as all-time leader in Top Fuel events contested. The perennial Top Fuel championship contender is looking for his second win of the season and a guaranteed spot in the Countdown heading into the NHRA Brainerd Nationals this weekend. Kalitta will also be sporting a new look on his dragster as LaBounty, a member of the Stanley Black & Decker family of tools will be branded on his 330 mph land rocket for this race.

“I have had a great relationship with Mac Tools and Stanley for many years so bringing LaBounty on to my Top Fuel dragster is a perfect extension of that partnership,” said Doug Kalitta, 45-time Top Fuel national event winner. “Their business is built on maximizing up time on job sites which is very similar to what we are doing at the track when my guys are servicing my 11,000 horsepower Top Fuel dragster between rounds.”

The success Kalitta has seen at the NHRA Brainerd Nationals has run the gamut from race wins to No. 1 qualifiers. His two Top Fuel wins were recorded in 2006 and 2003. One more Top Fuel win would move him into a five way tie for second place all-time. Currently he has the most wins at Brainerd of any active Top Fuel racer.

The Mac Tools dragster has also recorded two runner-up finishes at the fan-friendly race track coming within one round of victory in 2014 and 2000. In addition to race day success Kalitta has posted three No. 1 qualifying efforts going into race day as the quick Top Fuel dragster in 2002, 2004 and 2010.

“When you come to Brainerd you know it is going to be a fun weekend,” said Kalitta. “We have great fans that come down from Canada and this part of the country has a lot of passion for drag racing. We have had success here and I would definitely like to win this race for LaBounty as well as Mac Tools and Stanley Black & Decker.”

Quotable: Kalitta on heading to Brainerd: “The fans are great and you can have great weather too. That combination makes for a fun event. You can see some record runs at Brainerd and I just hope we can be in the mix with this LaBounty Top Fuel dragster.” 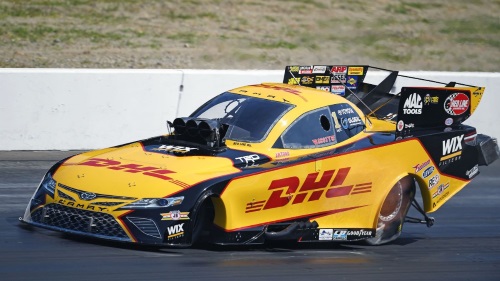 DHL Team and J.R. Todd Looking To Pick Up Pace in Brainerd

The reigning NHRA Funny Car champion knows that this is the part of the season when championship momentum starts to build. Last year heading into the NHRA Brainerd Nationals Todd and his DHL Toyota Camry Funny Car team were sitting in the No. 6 position in the point standings with a 1-4 record over the previous four races. They raced to the semifinals in Brainerd, then won their second consecutive U.S. Nationals before storming to the Funny Car championship with a 20-3 round win record including three wins.

This season they are in a similar position sitting No. 8 in the points just 36 points out of sixth place and similar 2-4 round win record over the past four races. The team knows the time to make a move is now and Brainerd International Raceway is the perfect venue for quick times and round wins.

“Last year we turned a corner in Brainerd I think,” said Todd. “We didn’t get the win but we figured a few things out that had been bothering us throughout the season. I don’t see why we can’t do that again this weekend and beyond. (Crew chiefs) Todd Smith and Jon Oberhofer are two of the smartest guys out here. My Yella Fellas have been busting their tails all season. I really think things are going to start going our way.”

When Todd and his DHL team roll off the trailer and make solid qualifying runs their chances of success on race day rise dramatically. They only have one first round loss from the top half of the ladder. In the highly competitive Funny Car class simply being in the top half does not guarantee a favorable match-up. Top to bottom the class has seen championship caliber drivers and teams make one misstep in qualifying and have to start race day from deep in the ladder.

“It seems like if you are not in the top three or four qualifiers you could still get a Countdown level team or a previous world champion driver in the first round,” said Todd. “You have to take every round like it is a final round. There is no room for error. You have to be perfect if you want to get a round win on Sunday. I am not talking about a race win I mean just getting out of the first or second round. I don’t think the competition has ever been tougher. That is what makes it so great out here.”

Quotable: J.R. Todd on heading to Brainerd: “Brainerd is always a great race. You have the drama of the regular season coming to an end. The U.S. Nationals are right around the corner. You can run really good times there because of the conditions and weather. It has a history of being a performance track and I definitely want to have this DHL Toyota Camry at the top of the class going into race day.” 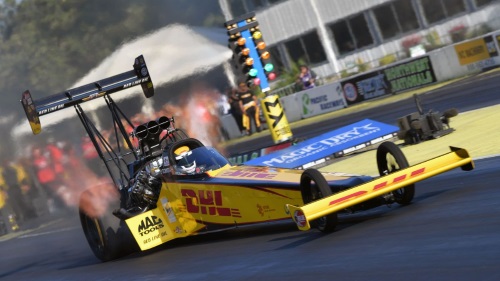 With two races left in the NHRA regular season Richie Crampton and the DHL Top Fuel dragster are racing for their second win of the season while also looking to lock down their playoff spot in the Countdown to the championship. This weekend at the NHRA Brainerd Nationals Crampton will be looking to capture the magic from 2015 that led him to the No. 1 qualifier position and straight to the winner’s circle. The 2015 edition of the Brainerd Nationals was the only time in Crampton’s career that he won a race from the No. 1 qualifier spot.

“We had a great race in 2015 for sure,” said Crampton. “We had a lot of confidence from being the No. 1 qualifier and then we took care of business on race day. I would love to get a repeat performance this weekend in Brainerd.”

This season Crampton has been running well but has not been able to get that elusive second win of the season. His highlight so far was a commanding back to back win at the historic Gatornationals. Since that win the DHL team has been more than competitive but it just hasn’t translated quick runs in qualifying to success on race day.

They are currently tied for eighth in the Mello Yello point standings and amazingly only one Top Fuel team has clinched a spot in the playoffs. Points leader Steve Torrence will for sure go into the playoffs in the No. 1 position, but after Torrence, who has handed Crampton three of his last four losses, it could be anyone’s game. Crampton has faced the points leader or his teammate Billy Torrence six times in the last eight races with unsuccessful results. Crampton has a much improved record against all his other Top Fuel competitors combined.

“We just keep running into Steve Torrence lately,” said Crampton. “They have a great race car right now. No one is beating them with any consistency. We know if you want to be the best you have to take out the best. We are working on a tune up that will beat everyone in the Countdown not just one team. These next two races will be important because you want to stay in the Top Ten. After Indy it is six races for the championship.”

Quotable: Crampton on heading to Brainerd: “Our goal is to get this DHL making consistent passes down the track every run. When we get four good qualifying runs we are a dangerous team on Sunday.” 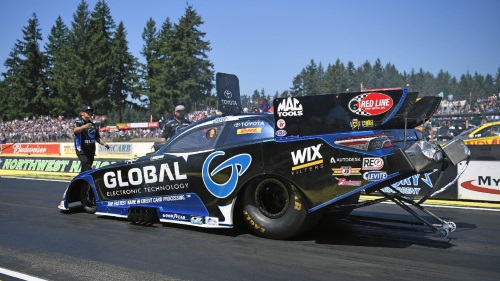 As one of the hottest current teams in the Funny Car category Shawn Langdon and the Global Electronic Technology Toyota Camry Funny Car team will enter the NHRA Brainerd Nationals with one goal in mind, getting another win in 2019. The second year driver picked up his first career Funny Car victory in Charlotte and has followed it up with a runner-up finish in Epping three races ago. The last six races have seen Langdon qualify in the top half four times, run a career best elapsed time and race to at least the quarterfinals every race. He is one of only two Funny Car drivers that have advanced out of the first round every race since mid-June.

“We made some changes after Norwalk and we have really seen our consistency improve and also our performance,” said Langdon. “Our biggest Achilles heel has been the quarterfinals. We just need to get over that hump.”

The improvement has Langdon who is sitting in the No. 9 position in the Mello Yello point standings focusing on Countdown success. He has a healthy 190 point lead over the driver in the No. 11 spot. To mathematically lock into the Countdown all Langdon needs to do is exit the race with a 196 points lead over the teams behind him. Points will be reset following the U.S. Nationals Labor Day weekend opening up the Global Electronic Technology team for its run to the championship.

“We still have to clinch in the Countdown so we aren’t looking too far down the road,” said Langdon. “We got a huge first round win in Seattle. This is a big weekend for us to continue to put rounds on the drivers behind us and try and close the gap on some of the teams in front of us. When they reset the points for the playoffs you are right back in this championship. First we need to qualify well and go some rounds in Brainerd.”

Langdon has not advanced to a final round at Brainerd International Raceway in either his Top Fuel or Funny Car career. It is one of eight tracks on the tour where Langdon has not raced beyond the semifinals. His quest for his first win in Minnesota will begin on Friday when qualifying gets underway at 3 p.m. local time.

Quotable: Langdon on first round win in Seattle: “That was a big win for us. You have to beat the teams that are right behind in the Mello Yello points you every chance you get. That was a 40 point swing. We put a round on a team that was chasing us. At this point of the season you are definitely aware of the points and the impact race day round wins can have on your season.”