Matt Hagan Rockets to the Top at Brainerd 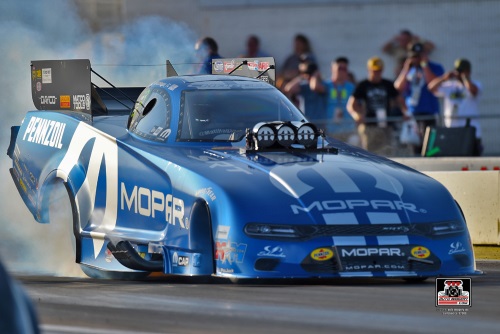 BRAINERD, Minn. (August 16, 2019) – Matt Hagan rocketed the MOPAR Dodge Charger SRT Hellcat Widebody to the provisional No. 1 spot on Friday evening at Brainerd International Raceway. Hagan claimed top honors when he powered his machine to the only sub-3.9-second Funny Car pass of the day during Q2, posting a 3.890 E.T. at 328.46 mph.

Before recording low E.T. and top speed of the meet in Q2, Hagan and his Dickie Venables-led team unloaded with a stout 4.004-second pass, the third quickest E.T. of Q1, allowing them to lean on their tune-up in Q2.

“We’ve got a hell of a race car right now,” said the speedster, a two-time 2019 event champion. “We’re coming off of some semifinals and finals; we’ve had a great combo that’s gone a lot of rounds so far. To roll in here, and have two great laps right off the bat, we just have a lot of confidence right now. The car was digging early, and it had a lot of wheel speed, and I was just trying not to oversteer it. I knew it was a good run, but it wasn’t until I turned the corner and saw my guys cheering that I realized how good that run was.

“The tune-up window is a lot bigger right now, and this is the kind of momentum we need heading into the Countdown,” added Hagan, who recorded the first sub-3.9-second Funny Car run in NHRA history during the 2015 Brainerd event. “We made two great runs, got down in both lanes, and have some good data to work off of for our race day setup. If we can make up some points and rounds here, we’ve got a really good shot at hunting hard for the championship.”

Hagan is seeking his third BIR No. 1 qualifier and is hoping his strong qualifying performance will help catapult him to his first Brainerd winner’s circle, and improve his Countdown ranking heading into the final ‘regular season’ race of the year.

“Things are clicking and jiving; the ball is rolling in the right direction,” explained Hagan, who currently ranks seventh in the Funny Car point standings. “This is one of the more exciting finishes to the regular season for our team. A lot of times we’ll start off really hot and fizzle out, but this year we’re starting to peak at the right time. But, that’s looking ahead. Right now, we need to focus on Sunday and trying to win this race.”