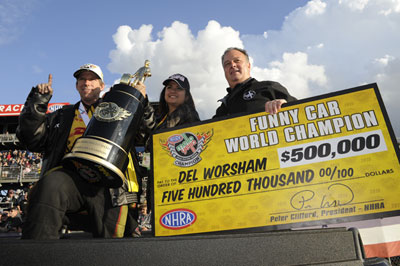 POMONA, Calif. — The NHRA Mello Yello Drag Racing Series will celebrate 50 years of Funny Car racing during the 2016 season and reigning Funny Car world champion Del Worsham could think of no better way to cap that celebration than with a second straight world title.

The Kalitta Motorsports standout became just the third driver in NHRA history win a championship in both Top Fuel and Funny Car after holding off Jack Beckman in a thrilling finish to the 2015 season.

With his first Funny Car championship now on his resume, Worsham now hopes for his first back-to-back championship reign in his 10,000-horsepower DHL Toyota Camry, a journey that starts at the tradition-rich 56th annual Circle K NHRA Winternationals, Feb. 11-14 at historic Auto Club Raceway at Pomona.

“I am ready,” said Worsham, whose four wins in 2015 all came in the Mello Yello Countdown to the Championship. “I feel as excited as I did in 1991 just starting out. I did not defend my 2011 championship, so it will be exciting to run the number one and go out and try to defend our title.

“I definitely took some time and enjoyed (the championship), but we are always focused on the task at hand. My crew is entirely the same as it was for the 2015 championship run and they have continued to work hard. Led by Jon Oberhofer, Nicky Boninfante and Dave Boyer, these guys have put in the hours to make sure we do not come into Pomona behind because we know our competition worked hard in the offseason to try to defeat us.””

Shawn Langdon (Top Fuel), Matt Hagan (Funny Car) and Jason Line (Pro Stock) were last year’s winners of the race that will be televised nationally on Fox Sports 1 (FS1), including live coverage of Sunday’s finals at 5 p.m. (ET). The revered event, the first of 24 in the 2016 NHRA Mello Yello Drag Racing Series season, kicks off a brand new era in the NHRA while also continuing to recognize the vast history in the sport with the Funny Car 50th anniversary celebration.

Worsham is well-versed in the storied history of the thrilling class, which also means a number of iconic Funny Cars have stood out to him over the years.

“As a kid, I was a fan of the Blue Max, Army and Super Shops cars, but as I got older the Budweiser King definitely stood out,” Worsham said. “Since I began driving, three of my rides have burned their way into my memory: my first Funny Car that I was able to drive to a win in Atlanta for the 1991 Southern Nationals, my 2004-2005 Checker, Schuck’s and Kragen (CSK) machine due to the amount of success that I was able to achieve in that car, and then my 2015 DHL Toyota Camry.

“It was already iconic and this championship definitely gives it a place in history. I think Funny Cars that have stood out in my mind are the ones that have had success. They ran hard and won races and championships.”

Worsham’s 2015 was certainly one to remember in a historic season in Funny Car. The class reached unprecedented levels, with Worsham and Beckman providing pulse-pounding drama down the stretch.

Worsham’s victory in Pomona in November to close out the season clinched his first Funny Car title, but the veteran pointed to a test session before the prestigious Chevrolet Performance U.S. Nationals as the key to his incredible hot streak over the final six races

“The Indianapolis test session is the biggest moment in my mind,” said Worsham, who has 38 career victories between Top Fuel and Funny Car. “We came in there trying to figure out where we were behind. We succeeded and then the execution that my DHL team had in the Countdown is beyond words.”

Worsham, a Southern California native, hopes that momentum continued through the off-season and he will return to Pomona as one of the favorites in the loaded Funny Car class. He will face off against a host of strong challengers to kick off 2016, including national record holder and seven-time 2015 winner Beckman, 16-time world champ John Force, Tommy Johnson Jr., Ron Capps, Hagan, Courtney Force, Cruz Pedregon, Tim Wilkerson and Robert Hight.

Heading into another rigorous season in a talented class, Worsham also values a team that has continued to stay intact. That camaraderie and stability has proven invaluable, and Worsham doesn’t take that for granted.

“It is amazing,” said Worsham, who had Countdown victories in Charlotte, St. Louis, Dallas and Pomona a year ago. “As I said, I have the same group as last year, and it just speaks to what (team owner) Connie Kalitta has built. The team is like a family and I feel extremely lucky to drive the DHL Toyota Camry.” 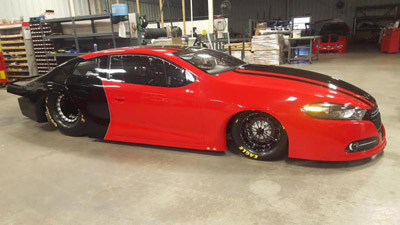 WHERE: Auto Club Raceway at Pomona, Pomona, Calif. Track is located off I-10 at Fairplex Drive. Go north on Fairplex drive.