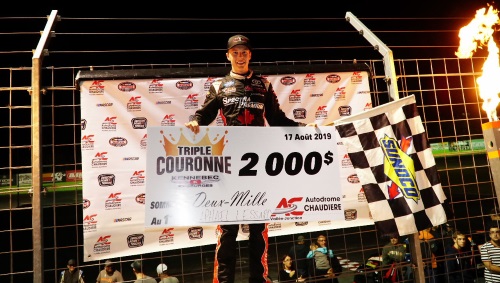 Vallee-Jonction Quebec, Canada (August 18, 2019) – After a breathtaking NASCAR Truck race aboard a Kyle Busch Motorsports Toyota in Bristol (Tennessee, USA) last Thursday, Raphael Lessard returned to his home track for the third and final round of the “Triple Couronne Kennebec” Series for Late Model cars and wins the Championship in front of his family at the wheel of car #46 Acceleration de Camions de St-Joseph | L.A.V. Equipment | FRL Express prepared by the Bilodeau Brothers.

The day was expected to be rainy at the Autodrome Chaudiere on the small quarter-mile oval with its banked corners that produce spectacular race actions. The multi-step qualifying procedure included timed laps, heat races and a draw to determine grid positions. A combination of speed and luck placed Raphael Lessard seventh on the starting grid.

After a good start, Raphael Lessard worked his way towards the leaders up to second place by mid-race in fact. The car was perfect, and everything pointed to a relatively easy win, but a disgruntled driver ruined the party by hitting Raphael Lessard’s car as he passed him. Raphael Lessard was left with damaged tires as he spun them to avoid hitting the wall. Race rules forbade tire changes during the race, so Raphael Lessard continued his fight towards the front. The other driver changed rear tires and was immediately disqualified but stayed on the track. He passed an unhappy Raphael Lessard on his better tires and was pushed off the track by the young driver for his troubles. As a result, Raphael Lessard finished fourth, just missing the podium, but he did in fact win the Kennebec Triple Crown on the basis of his three solid race finishes in the short series. 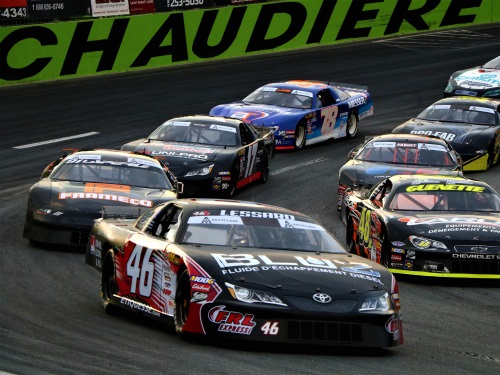 “I undoubtedly had the car to win, thanks to the work of Marco Bilodeau and his team at Bilodeau Brothers, as well as all my partners Acceleration de Camions de St-Joseph | L.A.V. Equipment | FRL Express, my parents and fans,” added the driver who was pleased with his performance in the end.

Raphael Lessard will be back on track on this coming weekend for his first race on the high-speed road course in the #54 FRL Express Truck prepared by DGR-Crosley. The driver will return to the NASCAR trucks in a race that is always spectacular and a favourite of the drivers and fans of the Gander Outdoors Truck Series. A new challenge that Raphael Lessard intends to take up successfully. 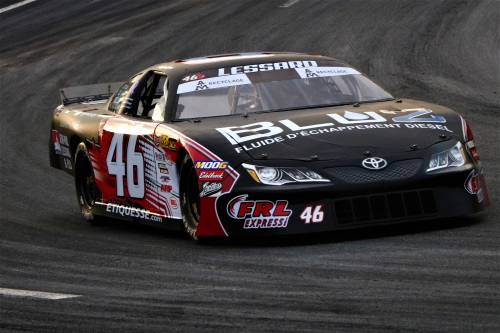 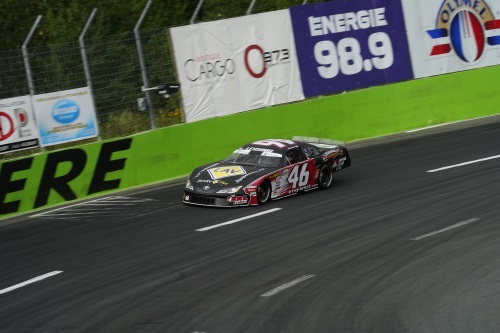 Born on July 5, 2001, in Saint-Joseph-de-Beauce, Quebec, Canada, Raphael Lessard is one of the most promising prospects in North American oval racing. Raphael made his debut in stock-cars in 2013, on local tracks in the Quebec City area. His exceptional talent quickly allowed him to climb the ladder and attract the attention of David Gilliland, a former NASCAR MonsterEnergy Series driver and now a team owner, in 2015. An agreement then allowed Lessard to participate in the last four races of the season in the PASS North Tour Series.

In 2016, his first full-time season with Gilliland Racing, Lessard won the CARS Super Late Model Tour title with four wins, 8 top five and 9 top driver to win a major stock car series title in the United States. Since 2016, Lessard has been part of the Toyota Racing Development (TRD) prestigious driver development program. To date, he is the only Canadian to have been recruited into this program.

Founded in 2003 in the family garage in Sainte-Marie de Beauce, the Bilodeau Brothers Racing Team competed in various categories on all paved ovals in Quebec since then. The team can count on Crew Chief Germain Gosselin, who has worked for ARCA and NASCAR teams in the United States. Since 2015, the team has focused on a development program of its NASCAR Late Model cars, having achieved several podium finishes along the way, as well as winning the ACT 2016 Rookie Championship and a first victory in 2017.