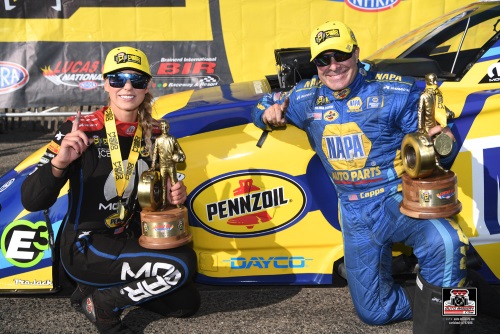 For Pritchett, the win Sunday was her first in 2019, and first since winning the 2018 Dodge Mile-High NHRA Nationals, snapping a 26-race win drought. She scored her eighth career victory by defeating Kyle Wurtzel, Billy Torrence, Austin Prock, and Mike Salinas.

It’s been a challenging season for Pritchett, and Sunday she and her MOPAR Dodge Top Fuel team were the last ones standing after starting the day from the fourth position on the eliminations ladder. After being knocked out in the first round the previous two races, the first hurdle was cleared when she defeated Wurtzel by posting a lap of 3.744 seconds at 327.43 mph. She followed that win by defeating the last two event winners in consecutive rounds, first beating Billy Torrence in the second round and then avenging two consecutive first-round losses to Austin Prock in the semifinals. By defeating Prock, she reached the final round for the 15th time in her career and officially clinched her spot in the Countdown to the Championship. In the final, Pritchett left first and smoothly drove away to score her 130th career round win and second race win at Brainerd.

“It feels so good to finally get that win, not only for myself and my team but for Don Schumacher and Dodge,” said the California native, who currently occupies the seventh spot in the Top Fuel standings. “I’m proud to be the one to put on that final round Top Fuel win light. This is the perfect time to be able to gain momentum heading into the playoffs. We made four incredible runs, and that’s something that (crew chiefs) Todd Okuhara and Neal Strausbaugh have worked hard to do consistently, and now it’s coming into play at a perfect time.

“We’ve made some chassis improvements, and you have to race with that extreme mindset where instead of playing it safe and being conservative, you have to race intensely, and we’ve gotten that mindset back. I’m excited because when I hear the crew chiefs talk about what they’re putting into the car and it’s finally reacting and doing what they want it to do, that’s great communication between the race car and the team. Putting all of the pieces of the puzzle together, we could see internally that we were moving in the right direction, but now everyone could finally see it this weekend.”

Capps’ run to the Brainerd winner’s circle was loaded with Countdown contenders, including three former world champions. After qualifying seventh, Capps drew reigning Funny Car champ J.R. Todd in the opening session. Capps’ 3.920-second pass outran Todd’s 4.635 E.T. and set up a quarterfinal contest with stablemate and defending event champion, Jack Beckman. Capps posted a solid 3.918 E.T. to dispatch his teammate’s strong 3.945-second effort and advance to the semifinals for the sixth time in 2019. With the round win, the fan-favorite faced Shawn Langdon in the semifinals where his smooth 3.938-second pass ousted his opponent’s tire-smoking effort. By capturing his 740th round win, Capps was headed to his second consecutive final round, and fourth of the season.

In his ninth Brainerd final round appearance, Capps lined up opposite teammate Tommy Johnson Jr. Capps and his Rahn Tobler-guided team knew they were going to have turn up the wick against their teammates who currently rank second in the point standings and are enjoying a career-best season. The veteran drivers ran nearly identical elapsed times, but it was Capps’ significant starting line advantage that propelled him to victory.

“Every time I race Tommy Johnson’s car, I feel like I’m racing a mirror of myself,” said Capps of the added pressure of racing his teammate in the final. “(Johnson’s crew chief) John Collins is a chip off the old block, he spent so many years working under Tobler; his approach is the same, and their car is set up almost identical to ours.

“The list of teams we beat today are teams you’re going to have to beat to win a world championship in those six Countdown races, there’s no doubt about it,” added Capps, who currently ranks fourth in the Funny Car standings.

With one race left before the Countdown standings are set, Capps is confident his team is peaking at the right time, and they’re in a good position to have a strong U.S. Nationals and playoff run.

“This is the time of year where you have to be at your best,” said the second-winningest Funny Car pilot of all-time. “You don’t want to go into Indy and have to worry about maneuvering yourself position-wise or worrying about getting into the Top 10. You want to race this race and put the finishing touches on your tune-up because Indy is our biggest race of the season and you want to go there just focused on winning the race. You really want to have your act together by Brainerd, so I’m so happy we had so much success today, and we have a great running car.” 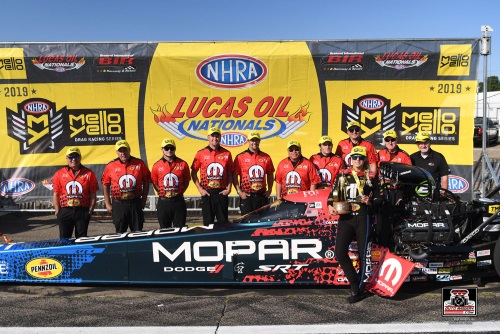 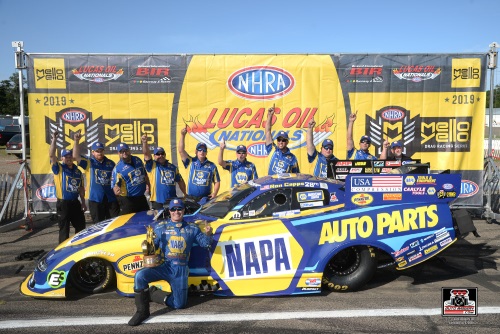 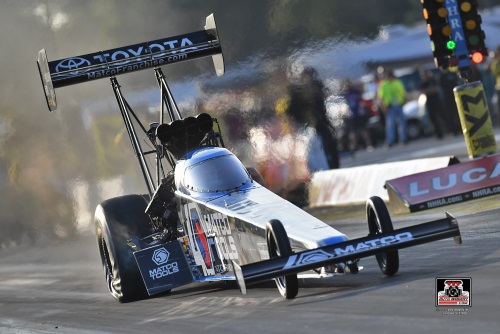 Race Recap:
By qualifying 12th, Antron Brown and the Matco Tools Toyota team set up a first-round meeting with Billy Torrence on Sunday morning. Brown was seeking redemption for last year’s Brainerd final round where Torrence came out on top, forcing Brown to settle for a runner-up finish. During the rematch, Brown earned a slight starting line advantage over the elder Torrence, but his dragster was up in smoke early, dashing any hopes to settle the score and capture his first Wally trophy of 2019.

Quotable:
“We’ve got to get to work. This wasn’t the weekend we were looking for, but we’re not going to hold our heads down. We’ve got some testing to do, and we’ll get our car ready for Indy. This isn’t the position we wanted to be in heading into the Countdown. We wanted to be peaking at the right time, and it’s no secret, we’re struggling right now. We’re going to work hard and work smart and get our whole package back to where it needs to be. We’ve got a lot to prove. We’re a championship-contending team, we’ve been there before, we know what to do, and we just need to get it done. We’re going to build and get ready for Indy.” 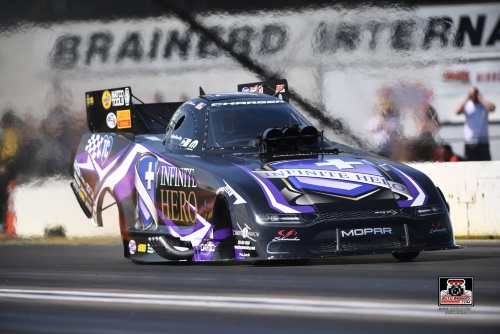 Race Recap:
“Fast Jack” Beckman was looking to break through and earn his initial triumph of 2019 this weekend while defending his 2018 Brainerd win. After qualifying the Infinite Hero Foundation Dodge Charger SRT Hellcat second in the field for the third time in 2019, Beckman rocketed to an opening-round win over Terry Haddock. He posted the quickest run and top speed of the weekend at 3.876 seconds at 329.75 mph to advance to the quarterfinals.

In the quarterfinals, he matched up with fellow DSR Hellcat Funny Car racer Ron Capps for the first time head-to-head this season. Capps grabbed the early lead, and despite posting a pass of 3.945 seconds, Beckman couldn’t catch up with his teammate.

Quotable:
“Our last win came here, and we were kind of hoping this is where we were going to get over the hump this year because we need a win. I’ll take six runner-ups in the Countdown if that’s enough to win the championship, but we need to get a trophy. To go out there first round and run low E.T. and top speed of the weekend and then come back and just flat get outrun by the NAPA team in the second round, that’s kind of a testament to DSR teams and how hard we race one another. Most of the time, our toughest competition comes from within our own camp. That doesn’t make me feel better, because we came here to take the Infinite Hero Dodge Hellcat to four win lights. We’ll take the data and get ourselves prepared for Indy. That’s a marathon race, and there’s nothing more that this team wants than to go the distance at Indy.” 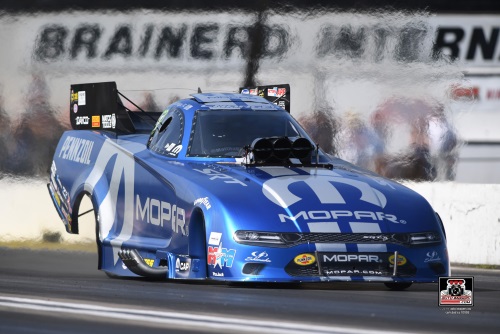 Race Recap:
Matt Hagan started race day from the No. 1 spot for the 35th time in his career and looked prime to capture his third win of the season and first at Brainerd International Raceway on Sunday.

The two-time world champion who clinched a spot in the Countdown to the Championship during qualifying drew Dale Creasy Jr. in round one and was able to easily defeat the part-time racer with his 3.937 E.T. versus Creasy’s 4.119. Hagan’s consistency continued in the quarterfinals as he powered the MOPAR Dodge Charger SRT Hellcat Widebody down in 3.954 seconds to outrun Tasca’s 4.092-second lap. In round three, Hagan’s seventh semifinal appearance of the season, he faced stablemate and fellow Hellcat pilot Tommy Johnson Jr. Crew chief Dickie Venables tuned Hagan’s machine to another solid pass. Hagan and Johnson were neck-and-neck until just before the finish line when Johnson set off the win lights with his 3.930 E.T. versus Hagan’s 3.932.

Quotable:
“It was a good weekend at Brainerd getting the pole and moving around (Bob) Tasca in the points, and obviously Indy is points-and-a-half. We’re making momentum with this MOPAR Funny Car, and (crew chief) Dickie (Venables) has a really good handle on the tune-up of this Hemi in a lot of conditions. We won Epping and have been going rounds, and this team is peaking at the right time, and I like the way we’re progressing. It’s going to be a fight in the Countdown.” 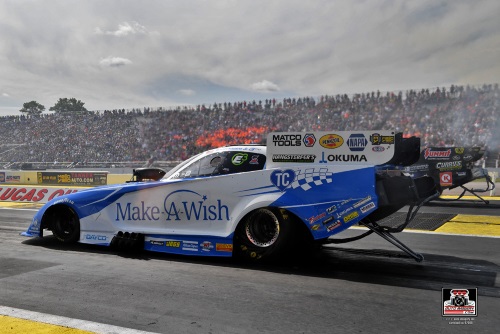 Race Recap:
Johnson continued proving he is going to be a factor in the 2019 Funny Car championship chase Sunday with his runner-up finish, which moved him up to second in the standings. Johnson raced the Make-A-Wish Dodge Charger SRT Hellcat Funny Car from the fifth position on the ladder and was victorious over Tim Wilkerson in the first round and followed that by defeating Robert Hight in the quarterfinals with his best run of the day at 3.910 seconds.

In the semifinal, he squared off with No. 1 qualifier Matt Hagan and used a tremendous light, a 0.031 reaction time, and lap of 3.930 seconds to keep his run for a second Brainerd triumph alive as he reached his 50th career Funny Car final and seventh in Brainerd. In the final, Capps had the starting line advantage, and Johnson couldn’t recover despite making a run of 3.947 compared to the winner’s pass of 3.946, and for the fourth time in the last five years, Johnson finished as the runner-up in Brainerd.

Quotable:
“We had a big points day for the team and have a really good running Dodge Charger SRT Hellcat Funny Car. I just made a rookie mistake there in the final. A mistake that I shouldn’t have made, but all in all it was a good day. To be able to win the rounds we did and get to another final just builds confidence for this team. We have a lot of momentum going into Indy, and I’m ready.”