BRAINERD, Minn. (August 19, 2019) – Jason Line was all business when he arrived at Brainerd International Raceway (BIR) for the Lucas Oil NHRA Nationals. The driver of the silver Summit Racing Chevrolet Camaro came to the event with 48 Pro Stock wins on his scorecard, but none of them had actually taken place on the hallowed grounds of the facility where he cut his racing teeth. On Sunday in Brainerd, though, Line righted the ship and scored the trophy, putting Team Summit – plus a gigantic group of friends and family – in the winner’s circle with a final-round defeat of Erica Enders.

“It was a good weekend, and today was very cool,” said Line, who had the quickest car in every round of qualifying to secure the 55th pole of his career and lay the groundwork for a trophy on Sunday. “You want to win in front of your friends and family; as fun as it is for me, it’s probably just as much fun for them. For me to see them and see how happy they are, that makes it super special.” 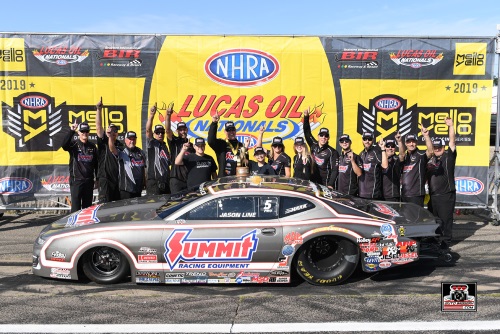 The semifinals set Line up against KB Racing teammate Deric Kramer, and when his opponent fouled out by .041-second then shook the tires, the streaking silver Summit Racing Chevy got the nod with the quickest and fastest pass of the round, 6.590, 209.94.

“I have my moments but she’s as good as anybody ever, as far as letting her left foot out. I don’t care who that is, whether it’s Coughlin or Alderman or Connolly or Tanner Gray – anyone. She’s as good as there has ever been,” said Line. “My goal is to get close to her and hopefully outrun her, and we did that today.”

The victory is actually Line’s second Lucas Oil Nationals win, but his first came in 2014 in a rain-delayed final round that took place two weeks later during qualifying for the U.S. Nationals, far away from BIR, his family and friends. This weekend’s celebration was exceptionally joyful because he could share it with all of those folks who missed it the first time around.

It also continued a streak, making this the 16th consecutive season in which Line has won in Pro Stock. It is the longest winning streak of any active Pro driver.

“As we get older, we realize these moments will be fewer and farther between,” said Line. “This is very special. I’m super excited – well, as excited as I get, anyway. My dad, Lawrence, he’s kind of a numbers guy, and he likes streaks, so he makes a big deal out of the fact that I’ve won a race every year I’ve raced in Pro Stock. He puts a lot of pressure on me to make sure that continues, so to do it here in front of him is very cool. I’m pretty sure he’s proud. It was just a great weekend and a fun day, for sure.”

With the win, Line moved up to No. 4 in the Pro Stock points with just one race to go before the NHRA Countdown to the Championship field is set. 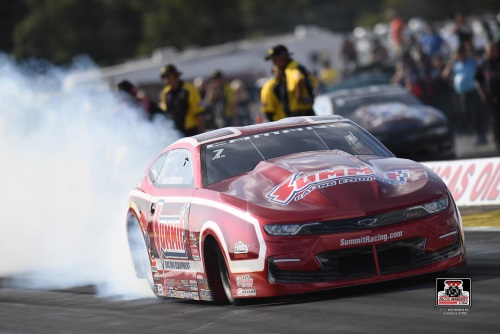 Teammate Greg Anderson, driver of the red Summit Racing Chevrolet Camaro, remains No. 2 in the standings after his car pulled to the right, got out of the groove, and then couldn’t be set back on course quick enough to claim victory over Laughlin in the first round. It was particularly disappointing for Anderson after reaching the final at each of the most recent three events and earning two coveted Wally trophies for his efforts.

“We just didn’t really get a good run this weekend, and we never found what we were looking for with the red Summit Racing Chevrolet Camaro,” said four-time Pro Stock champion Anderson, a native of Duluth, Minn., who owns 94 of KB Racing’s 157 national event wins.

“That’s hard, it’s a tough pill to swallow, especially here because you want to do so well in front of your family and friends and with everyone here cheering for you,” Anderson continued. “The good news is that we’re still No. 2 in the points, and we’ve shown these last few races that we know what this car wants. Hopefully, we’ll get back in shape at Indy in two weeks. It was great today to see Jason finally get a win at Brainerd. Really, it was a good weekend for Team Summit, we just have some work to do with the red car. I’m confident we’ll get there.”

The next stop on the 2019 NHRA Mello Yello Drag Racing Series tour will be the historic U.S. Nationals in Indianapolis, Aug. 28 – Sept. 2.

Join the conversation by using #BrainerdNats on social media