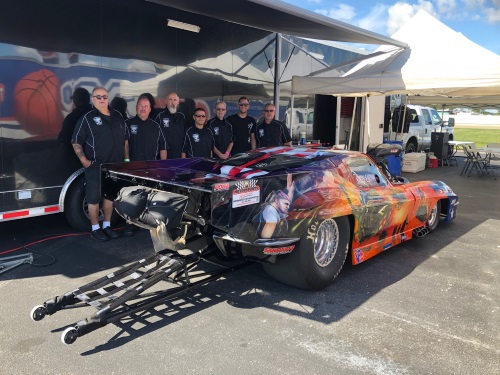 SALEM, OH (August 20, 2019) – So far in 2019 Steve Easton and the Patriot Pro Mod team have been doing everything right they just haven’t seen the results on the race track. Over the off-season new parts were added and tested by the young Australian who is driving and contributing to the tuning efforts. Easton and his team continued to make improvements on the set-up and put together an on-track testing schedule that they felt would have them ready to improve upon the success they experienced at the end of 2018. Through a number of test sessions and two races this season there is has been frustration but no concession.

“We have had a tough go of it for sure,” said Easton. “It seems like we just haven’t been able to get the power to the track or we are creating too much power for the conditions. This team is working so hard and putting in a ton of hours. I really think we are about to turn the corner. We had high hopes headed into the Night Under Fire.”

The team had high hopes heading into the iconic Night Under Fire two weekends ago in Norwalk but a disappointing DNQ set them back on their heels. They realized they needed to do a full tear down of the ’63 Corvette Pro Mod following the event. After a systematic evaluation the team discovered some chassis damage which is not unusual but had to be repaired.

“After the Night Under Fire we stripped the whole car down. We create so much torque that eventually you will get cracks in the chassis and that is what we found,” explained Easton. “We are fixing that issue right now and will be ready to get on the track again this weekend to race at Dragway 42. Our biggest issue has been the Patriot Pro Mod is finally running the right way. We had it running last season but the parts and systems weren’t reaching their full potential. Now we have everything squared away but we are basically back to square one with a tune-up.”

The team found some lingering issues earlier in the season and corrected the problems. The past two or three seasons they have been building their program working around some of those issues. With the support of sponsors and adding new parts and systems this season the team is on much more solid footing. They have reached the point where they have top-shelf parts throughout the race car and are getting them to race to maximum efficiency. The downside is now a lot of the data from the past two seasons is virtually worthless. 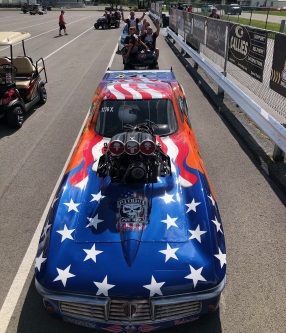 “We have had great support from SSI Supercharger Systems and they have been very supportive,” said Easton. “We are creating more power than ever before and this Patriot Pro Mod has never been in better shape. Our issue is now we are going back to the drawing board on the tune-up because we finally have all the right pieces in place. It is a great problem to have but one that comes with a fair share of frustration.”

The one thing Easton was adamant about throughout this whole process was the positive attitude of the entire team as well as their ability to continue to keep working hard. Through long weekends at the track and late nights at the shop not one team member has moved away from the common goal of racing hard and having fun.

“We just thought we needed to keep grinding,” said Easton. “The best way to work through issues with a tune-up is to make passes so that is what we are going to do. The beauty is no one on this team has given up hope and no one is losing faith. We are all supporting each other and looking forward to getting better. I appreciate the help and tips I get from a great network for NHRA crew chiefs and former crew guys.”

This weekend the Patriot Pro Mod will be back on the track at Dragway 42 for the Outlaw 660 Series on Saturday, August 24. For information about the event visit https://www.dragway42.com/

Patriot Pro Mod is a professional racing team based in Ohio that competes in the extremely competitive and very popular Pro Modified Drag Racing Class. This includes several Drag Racing leagues and organizations at a multitude of race tracks throughout Ohio and the Eastern United States. The race car is state of the art, super high performance, purpose built making over 3,000 horsepower and pushing speeds near 200 mph. Learn more about the Patriot Pro Mod team at the team’s new website www.patriotpromod.com.