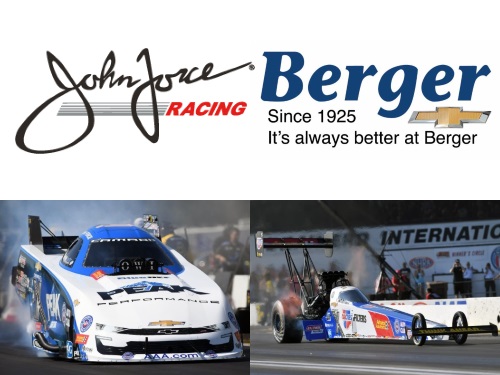 “We at Berger Chevy are always excited to have John Force at our store. He’s come the last several years and he never fails to be a great addition to the festivities. He really takes care of the participants and attendees and makes them feel special,” said Matt Berger. “The excitement level has only grown knowing he’s bringing Brittany with him. We always love having another John Force Racing driver at the event but it’s a special treat to have the father-daughter duo here. These two are phenomenal ambassadors for the Chevrolet brand. Being a Chevy dealership for the past 90 years, it really means a lot to us to have them here.”

The All GM Show, hosted by Berger Chevrolet, who’s been building Camaros and other performance vehicles since the 1960’s, is open to all General Motors vehicles, especially Berger Chevys from the ’60’s and ’70’s along with the all-new Custom Berger Camaros, Hot Rod Magazine Limited Edition Camaros, Berger ZL-1 Camaro Supercars and the Berger Chevrolet – Dick Harell Camaro Supercars. If you have a GM vehicle, Berger Chevrolet wants to see you there and if you don’t, come enjoy the show. General admission is free and vehicle entry into the show is only $15.

In addition to the car show and having the father-daughter Force duo in attendance on Saturday, The All GM Show, taking place August 23-24, will feature activities on Friday including a meet and greet while watching the 15th Annual 28th Street Metro Cruise, and an Open Track Day at US131 Motorsports Park in Martin, Mich.