BROWNSBURG, Ind. (August 28, 2019) – Rookie of the Year candidate Austin Prock and the Montana Brand / Rocky Mountain Twist Top Fuel team are gearing up for the 18th event on the NHRA Mello Yello Drag Racing Series Season schedule, the Chevrolet Performance U.S. Nationals, and ready to clinch their spot in the NHRA Countdown to the Championship.

With a win at the Northwest Nationals, two semifinal appearances at the Heartland Nationals and NHRA Nationals at Brainerd International Raceway., and a handful of runs in the .70s and .80s in their back pocket, Prock and the Montana Brand / Rocky Mountain Twist team have shown they are a competitor to watch out for. At the recent event in Brainerd, Minn., the rookie driver strung together three solid runs in the .70s including a 3.769-second pass that earned him a qualifying spot in the top half of the field. He continued to keep a steady pace going into eliminations where he powered his way past Scott Palmer and teammate Brittany Force to make his second semifinal appearance of the season and leave the event sitting eighth in the NHRA Mello Yello points standings.

“Coming off a win like we had in Seattle, we’ve just been really confident and we showed that in Brainerd. We had another good race weekend and went the semis, and we’ll keep pushing and going after it the rest of the season,” said Prock. “My team stayed in Brainerd and got some testing in and the car ran really good. Mike Green and Ronnie Thompson were really happy with it and I’m ready to show what we learned. We’re ready to get this Montana Brand / Rocky Mountain Twist hot rod back in the winner’s circle.”

The third-generation driver heads to Lucas Oil Raceway at Indianapolis looking for his second win of the season. He’s also competing to become the sixth John Force Racing driver to enter the winner’s circle at the historic event.

“I’m itching to get back in the seat at the U.S. Nationals this weekend. I’ve been dreaming of this since I was a kid and I can’t wait to get the weekend started,” said Prock. “This Montana Brand / Rocky Mountain Twist car is performing at its best so far this season and I think there’s great things coming for this team.” 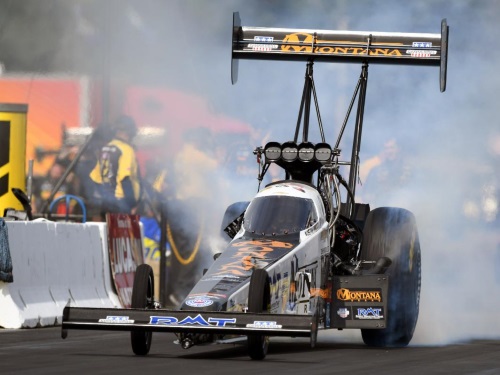