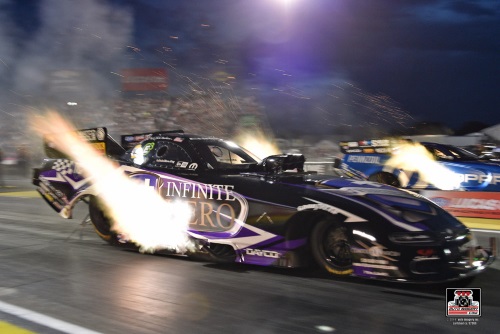 “Shawn Langdon was a few pairs in front of us and we saw him run a 3.88 at 330 and then I saw (crew chief Dean) ‘Guido’ (Antonelli) give (co-crew chief) John Medlen the signal to take the cover off the controller, which means he just saw that car go 3.88 and he knows there’s more on the race track there so he’s speeding the car up,” explained Beckman of Q1.

“John Medlen always lets me know the characteristics of the lanes; where to stage, where it’s going to pull the car, and I’m processing all of this. So then I go out there and the car makes a move to the right and I didn’t think it was going to make it down, because when you’re accelerating that hard, the front end is light and they don’t want to steer and the cars get real edgy. And then when I got it back in the middle of the lane and at the transition, it hit a bump. I got on the radio in the shutdown area and said it looped the tires a little bit down there. Going back and looking at the data, it barely made it, but it did, and we got that 3.87 and it feels awesome.”

Beckman is currently ranked fifth in the NHRA Mello Yello Countdown to the Championship standings. He is a three-time runner-up in 2019 and despite the team’s strong performance, the 2012 Funny Car world champion has yet to visit the winner’s circle this year. He is hoping his strong Q1 run will help to not only better his chances at picking up a second Indy crown, but will give him a points advantage heading into race day as he angles for a higher seed to start the playoffs.

“I want to be No. 1 for the next seven races because it’s all about the points right now,” said Beckman, who clinched his spot during the Seattle event. “Don’t think we’re not counting them. We just added another four to our total. We’re looking to take over third so we’re racing for a 10-point improvement once they reset the points. Everything matters.

“I think we have a car that will legitimately contend for the championship but I think all of our crewmen need to stand in the winner’s circle for their own mental well-being. I think you can recognize that you have the capability of being the best, but you need to stand there at the end of the day because you were the best at the end of the day.”