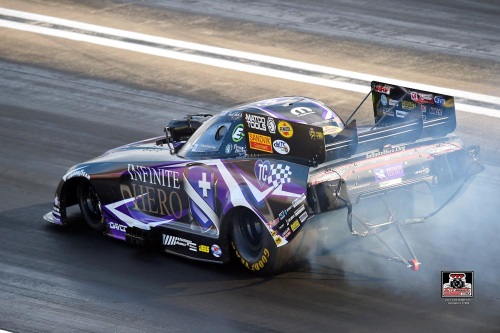 BROWNSBURG, Ind. (September 1, 2019) – “Fast” Jack Beckman maintains his provisional No. 1 qualifier position after day two of qualifying for the 65th annual NHRA U.S. Nationals in suburban Indianapolis. Complete domination best describes the performance by Beckman and the Infinite Hero Foundation team after the first three qualifying sessions of the weekend.

Beckman unloaded with a 3.861-second pass on Saturday, besting his top-ranked 3.875 E.T. from Friday’s single qualifying session to reaffirm his position at the top of the 19-car field.

The 2012 Funny Car world champion who is seeking his first No. 1 qualifier and first win of the season continued to demonstrate his Dodge Charger SRT Hellcat’s quick and consistent performance capabilities when he charged to a 3.878 E.T. at 331.94 mph in Q3. Beckman was the only Funny Car pilot to make three sub-3.9-second passes during the first three qualifying sessions, earning 11 out of a possible 12 bonus points.

“I think we’re arguably the best car out here right now,” said Beckman, who is currently ranked fifth in the Countdown standings and is aiming to move up at least one spot before playoff positions are locked at the conclusion of the race weekend. “We’re making a statement repeatedly here, and because it’s also ‘bonus’ bonus points in each qualifying session, we got four points for being low of Q1, four points for being low of Q2, and another three in Q3. We were low of the lane we were in during Q3, and it’s hard to ask for any more as a driver. And, you drive better with a higher degree of confidence.”

“We can stick a different clutch disc in it tomorrow,” explained Beckman of his team’s ability to test on Sunday. “We have the luxury of trying some things that might be a little outside of our comfort zone, and we’re still going to be just fine. I don’t know if the weather will be similar to what we experienced today or yesterday. Maybe we’ll get a couple more hero shots at it, maybe it’s hot and sunny, but I think we’ve proven we’re pretty darn good in all conditions.”