BROWNSBURG, Ind. (September 1, 2019) — Brittany Force and the Advance Auto Parts team continued their dominance at the Chevrolet Performance U.S. Nationals to end Saturday with a stronghold over the No. 1 spot. Teammate Austin Prock improved to currently sit in 13th with his Montana Brand / Rocky Mountain Twist dragster and, in Funny Car, John Force and the PEAK Chevrolet Performance Accessories team moved up four spots into No. 3 and Robert Hight with Automobile Club of Southern California will start the final day of qualifying from seventh.

Coming into day two of qualifying at the U.S. Nationals as the No. 1 qualifier, Brittany Force and the Advance Auto Parts team kept it consistent when they landed a 3.676-second pass at 330.96 mph to be second quickest of the second session. Through the third and last qualifying round of the day, the 2017 Top Fuel world champion had to watch as she was shifted into the No. 2 spot before making a track elapsed time record of 3.645-seconds at 332.26 mph that maneuvered her David Grubnic and Mac Savage tuned dragster back to No. 1. 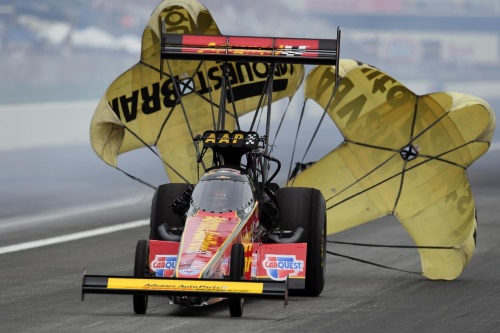 “All of my runs felt fast this weekend and really, we’ve been looking for consistency. That’s the main thing we’ve been struggling with and to be able to come out here and have one outstanding run yesterday then two today and put a number like that up on the board,” said Force who picked up seven bonus points on the day. “I saw Billy (Torrence) got ahead of us and put a .65 on the board. Before the run Grubnic told me what his plan was, if it could make it down there and what kind of run it would be and he was pretty close, he was right on. It was awesome to see this Advance Auto Parts team run a .64. When I jumped out on the other end, I was pumped when they told me what we ran.” 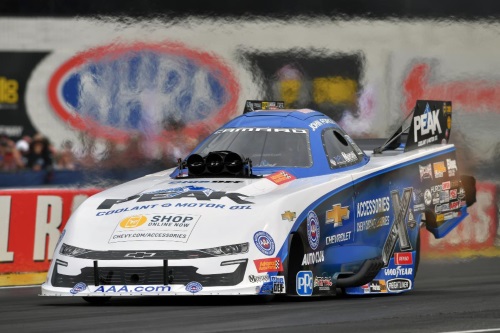 Sixteen-time Funny Car world champion John Force started his day in the No. 7 spot and would jump to No. 2 and earn three bonus points off the efforts of an impressive 3.876-second pass at 332.67 mph in his PEAK Chevrolet Performance Accessories Chevy Camaro. Force stayed consistent to run his hot rod to 3.897-seconds at 327.98 mph Saturday evening but would be pushed back one spot to start Sunday’s qualifying sessions from No. 3.

“We’re third and Brittany holding low, that was pretty impressive to watch them take it away and her get it back. Grubnic is a pretty sharp cookie,” Force said. “I feel good. I was second but we have two runs left tomorrow so this whole thing will get shuffled around. I have a good race car so all the boys, Corradi and Danny, they’re doing good and I have a car I know how to drive so we’ll see where it goes from here.” 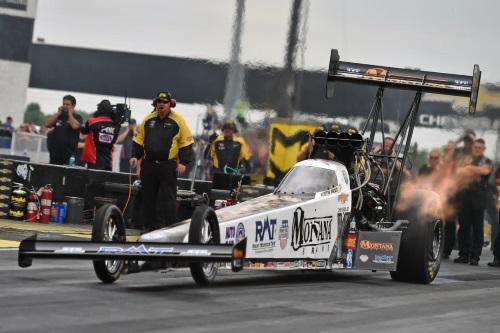 Austin Prock and the Montana Brand / Rocky Mountain Twist dragster ran into more issues on their second qualifying pass when their hot rod went up in smoke at the hit forcing Prock to shut off early for only a 10.675-second pass. The Auto Club Road to the Future Award, NHRA’s Rookie of the Year Award, candidate made drastic improvements in Saturday’s evening session when he handled his dragster to a 3.742-second pass at 328.06 mph to end the night in 13th.

“Finally got that monkey off our back this weekend. We went up there and went back to what we know and went right down there, ran a .74 which is a nice pass. The weather’s looking a little iffy tomorrow so we had to make sure we got into the U.S. Nationals,” said Prock. “We locked ourselves into the quickest field ever so to do that at my first U.S. Nationals event and to be a part of that is something special and we’re going to hopefully get two more runs in tomorrow and improve, get into the top half of the field and do some work on Monday.” 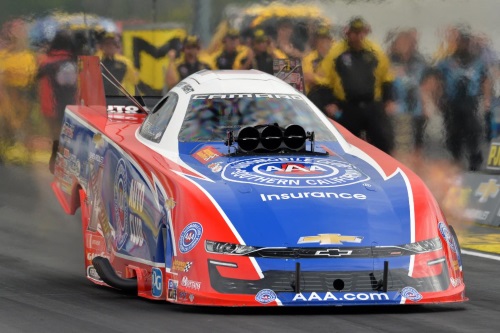 During his first pass on Saturday, Robert Hight had to click off his Auto Club Chevy Camaro SS early to run 4.418-seconds at 194.97 mph. In the third session, Hight had similar trouble down track and shut off to make a 7.013-second pass at 90.94 mph. The racing veteran was only bumped two spots to start the third and final day of qualifying from the No. 7 spot.

“It hasn’t been the best two days but when you have three days of qualifying you have some room to figure things out, make some changes. We’re in the show, we know that, so I’m not worried. We’ll start tomorrow in seventh. It’s the U.S. Nationals, there’s pressure, but it’s really race day that you have to worry about and I’m not worried about it. I’m more than confident in Jimmy Prock and Chris Cunningham and this entire Auto Club team.”

Nitro qualifying at the Chevrolet Performance U.S. Nationals will conclude Sunday with sessions at 2 p.m. and 5 p.m. Eliminations are scheduled to start Sunday at 11 a.m. Catch the action on FS1 Sunday at 2 p.m. and 4 p.m. ET with Finals coverage starting Monday at 11 a.m. ET and continuing at 1 p.m. ET on FOX Broadcast Network.