BROWNSBURG, Ind. (September 3, 2019) – After finding the consistency the team had searched for much of the summer, defending U.S. Nationals Champion Terry McMillen and his AMALIEⓇ Motor Oil XTERMIGATORⓇ team fell to Steve Torrence in the opening round. The loss and Billy Torrence’s win ended McMillen’s hopes for The Countdown to the Championship.

“We didn’t make the Countdown and that sucks,” McMillen said. “But, it really didn’t come down to this race. We gave up too many rounds during the season. It was just more than we could try and make up for in one race.”

McMillen made five solid runs during qualifying and eliminations all in the 3.76 to 3.78 elapsed time windows in what turned into the quickest Top Fuel field in NHRA history.

“This is a good team,” McMillen continued. “We’ll go into spoiler mode. There’s six races left and while we can’t win the Championship we can make a difference in that outcome. Plus, it’s never to early to start building for next season.” 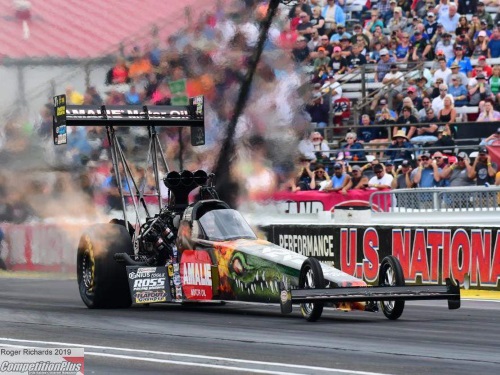