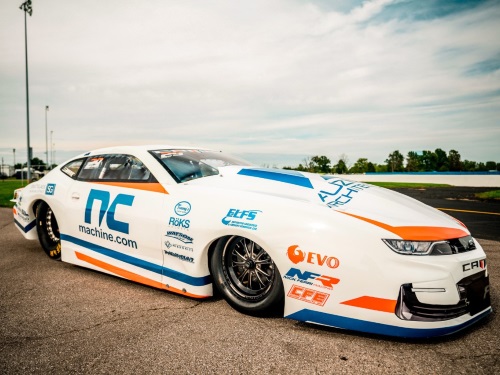 INDIANAPOLIS, IN (September 4, 2019) – The 65th edition of the Chevrolet Performance NHRA U.S. Nationals was an event full of promise for Australian Shane Tucker and his Auzmet/StructGlass Chevrolet Camaro Pro Stock team. In 2014 during his rookie campaign Tucker qualified No. 14 at the “Big Go” but was ousted in the first round by Shane Gray. Beginning in 2016 Tucker attempted to compete in the most prestigious drag race in the world only to be denied for three consecutive years. This weekend Tucker with his Nick Ferri Racing engine program, along with tuning expertise from his father Ron Tucker – the business owner who splits time between Dallas, Texas and the land down under — qualified in the No. 15 position.

“We have had our struggles this season for sure,” said Tucker before the race started. “We had to skip the Western Swing but we kept working on getting this Chevrolet Camaro ready for Brainerd and the U.S. Nationals. Two weeks ago we raced for the first time in a long time and saw some decent results. I knew we could come to Indy and you never know what can happen at this race.”

Throughout the three days of qualifying Tucker and his Chevrolet Camaro posted decent runs and were always in the field. There was no doubt that the Australian would be racing on Monday and that fed his confidence as a driver and team owner.

“You want to race and not just make qualifying runs,” said Tucker. “I felt really good on Friday and Saturday. We tried a few things on Sunday. I knew we had a tough first round opponent in Jason Line. I went into the first round with the attitude that he was going to have to make a good run to beat us. We weren’t going to hurt ourselves.”

Tucker and Line were the fifth pair of Pro Stock race cars and with every pair Tucker’s confidence level increased. He wasn’t getting over confident against the three-time Pro Stock world champion but he felt like he could shine. When the Christmas Tree flashed Tucker took a starting line reaction time advantage, .039 to .048, as the Camaros launched. Tucker and his Auzmet/StructGlass Camaro could not keep up with the Summit Racing and KB Racing power as Line pulled away for the win. At the finish line it was Line posting a 6.579 second run which was quickest of the session to Tucker’s 6.653 second pass.

“We gave it our best. We are going to head to the Countdown races with the attitude we can cause some trouble for the top ten teams,” said Tucker. “I love racing in the NHRA Mello Yello Drag Racing Series. These are the best racers in the world and any time you get a chance to go head to head with them that makes you better. We didn’t get the outcome we were looking for but we got a lot of data and runs that will help this team.”