After qualifying atop the field at the sport’s biggest race, Coughlin beat Brandon Greco, Jackie Fricke and Will Smith before eliminating himself with a miniscule -.003-second red-light foul in the finals against Megan Meyer, which she won with a 5.250.

“I need to thank everyone on the McPhillips Racing crew — Rich and Richie (McPhillips), Duke Roney, John Flenard, Andy Goode, Charlie Wroten and Charlie Greco — for covering my butt today,” Coughlin said. “This is the U.S. Nationals, the granddaddy of them all, and they stepped up and showed their professionalism.

“From qualifying No. 1 in the field to giving me a car that beat some of the best drivers in the sport, on through to having a great chance to win this race, I simply couldn’t ask for more. I wish I’d been a little sharper behind the wheel today but it just wasn’t meant to be.” 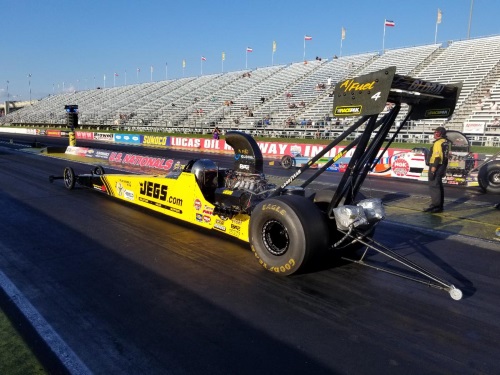 Troy Jr. raced to his eighth final-round of the season in Top Alcohol Dragster

“I missed the light in the first and third rounds and just was okay in Round 2 so I took a chance against Megan and I just never imagined I’d go red,” he said. “About three pairs back in the staging lanes I decided to go deep on her because I knew I needed to hit the Tree. I made a bad choice, going deep. I had a plan and it didn’t work out.

“It’s emotional. We’ve been on a helluva run and I feel like I let the guys down. All I can do at this point is regroup and get ready for the next race. Big thanks to Wayne and Rene Butler this weekend. They helped me a bunch.”

An Indy winner in 2010 (Super Comp) and 2014 (Super Gas), Coughlin has three victories this year. He won the national event in Norwalk, Ohio, and two divisional races in Atco, N.J., and Bowling Green, Ky.

Troy Jr.’s uncle, Jeg Coughlin Jr., opened Pro Stock eliminations with an exciting victory over Chris McGaha. Although the two ran nearly identical elapsed times — Jeg Jr. with a 6.613 and McGaha with a 6.614 — the race was essentially a blowout due to Jeg Jr.’s massive .040-second head-start at the Christmas Tree.

“We had a great race there and the guys put a solid car under me,” Jeg Jr. said. “There was a general feeling the JEGS.com Elite Motorsports Chevrolet Camaro had more in it so we got back to the pits and started pecking away to see where we could improve. We knew we needed a little more to increase our chances in Round 2.”

That’s because the next round opponent was Jason Line, who had pounded out an impressive 6.579 at 209.56 mph in his first-round victory over Shane Tucker. 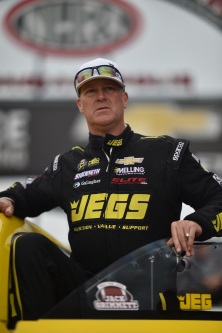 “It’s been a decent regular season for us and we did accomplish a few goals by qualifying for the Countdown to the Championship and winning a race. Now we really need to get super aggressive and see if we can’t make a big move in the playoffs. The slate has been wiped clean for the most part so it’s time to go for it and see what happens.

“After we were done it was very exciting to be here and see my nephew Troy Jr. race to the Top Alcohol Dragster final. I know how much he wanted another win here but a runner-up result is fantastic and he’ll certainly be a contender down the stretch. That will be fun to watch.”

Aside from his activities in Pro Stock, Jeg Jr. also had a chance to win as car owner with four-time world champion Jeff Taylor driving his JEGS.com Dodge Challenger Drag Pak in Super Stock. Taylor raced hard but ultimately bowed out in the third round to Allen Wade by .0402 seconds. 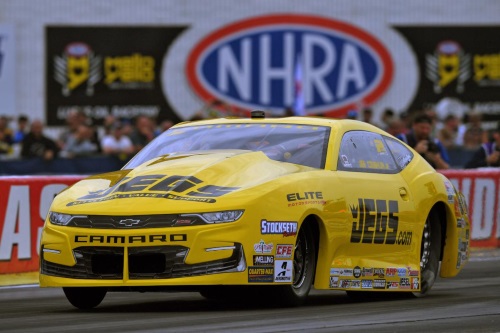 Jeg Jr. reached the quarterfinals of this year’s U.S. Nationals 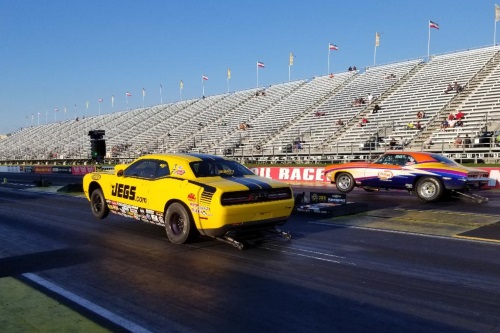 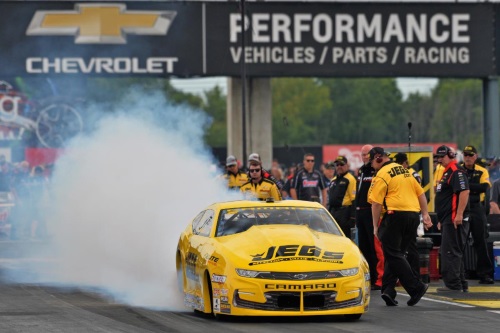