Winner of two of the last three NHRA tour events including the 65th annual Chevrolet Performance U.S. Nationals at Indianapolis, Force starts the Countdown only 20 points behind teammate and regular season champion Robert Hight and in an event he has won seven times previously, most recently in 2013.

Force once again is defying the odds and has found the fountain of youth for which so many have searched so earnestly. Turns out, it’s in the gas tank of the 11,000-horsepower hot rod in which he has been to the semifinals or beyond 10 times this season. Nitromethane, it seems, is what allows Force to fly in the face of convention.

“God, when I get in that car, I’m alive again,” he said. “It’s like my heart starts working and everything is good. So, don’t let anybody tell you that you’re too old. Get up and stay alive and keep moving.”

Not that his latest transformation has been an easy one. It hasn’t. It came with a wakeup call that, to his credit, Force did not ignore. He made some major lifestyle changes that have paid dividends at the wheel of the Camaro in which youngest daughter Courtney chased the championship a year ago.

Working with new crew chiefs Brian Corradi and Dan Hood, Force once again is a contender.

After a 38-race stretch during which he never climbed higher than No. 7 in points, the 16-time champion has been top three the last four months and top six all season long. His win last month in Seattle secured his 35th consecutive Top 10 finish and his 32nd season with at least one victory. He’s had multiple wins in 26 seasons. He now sets records every time he illuminates a win light.

The Hall of Fame owner and driver still wants it more than most although he grudgingly, and finally, has begun to acknowledge his own mortality.

“Someday I’ve gotta go out that door,” he admitted, “but I said, two things, it would be nice to win another championship and it would sure be nice to win Indy one more time.”

That’s one down; one to go.

Qualifying at Maple Grove Raceway, a track on which Force has qualified No. 1 eight times and raced in 14 finals, begins with nitro sessions at 2:45 and 5:45 p.m. Friday. Qualifying continues at 1:30 and 3:45 p.m. Saturday with final eliminations beginning at 11 a.m. Sunday. 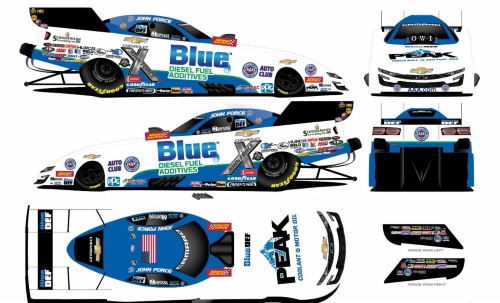