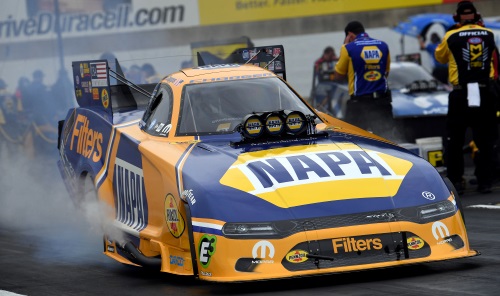 MOHNTON, Pa. (September 14, 2019) – Ron Capps blasted to the second-fastest run in NHRA history on Friday night during the MOPAR Express Lane NHRA Nationals Presented by Pennzoil. His blistering run of 3.837 seconds at 339.28 mph was the first 339 mph pass to light up an NHRA scoreboard since the 2017 Maple Grove Raceway event, and successfully reset both ends (E.T. and speed) of the Mohnton, Pa. track record.

Before resetting his career-best E.T. and speed while capturing the provisional Funny Car pole, Capps and the NAPA Filters Dodge Charger SRT Hellcat Funny Car team powered to the best run of Friday’s opening qualifying session, blazing down the track in 3.849 seconds.

“I was just hoping to get the Countdown started on the right foot,” said Capps, a three-time race winner in 2019. “I didn’t expect the right foot to be a 3.83. I felt like I almost had to pedal it that first lap, but it made it through there and put a cylinder out at about 800 feet.

“After seeing a couple high 3.80s and 3.90s early in that second session, (crew chief) Rahn Tobler knew there was a lot out there, and it paid off being at the back of the pack,” added Capps, who banked six bonus points for his solid Friday qualifying performance.

Capps credits his Q1 run for being able to lay down the monster Q2 pass.

“We have our new Dodge Hellcat body really trimmed out and Tobler went outside of his comfort zone since we had such a good first run. He really wanted to see what he could do if we get these conditions at another Countdown race. I knew it was going to be a handful. I knew we were on a good run and was hoping we could repeat our first session run. When they told me after the run we went 339, that was pretty neat. Any record you set now in this new track prep era is special. It means more now to run a 3.83 and to go 339 because we just don’t have the track prep and grip we used to have.”

Capps is currently ranked fifth in the NHRA Countdown to the Championship Funny Car standings and is seeking his second No. 1 qualifier of the season, and 24th of his career.