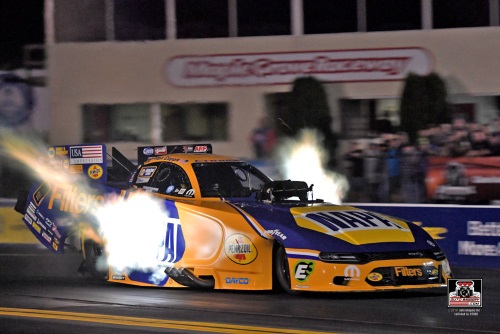 Capps No. 1 After Record-Setting Performance

MOHNTON, Pa. (September 14, 2019) – Ron Capps and the NAPA Filters Dodge Charger SRT Hellcat Funny Car team wasted zero time as they began their campaign for the 2019 NHRA Mello Yello Funny Car world championship title, throwing down the gauntlet with a record-setting run on Friday night to earn the pole at the first race of the Countdown to the Championship.

The 2016 Funny Car world champion blasted to a 3.837 E.T. at 339.28 mph under the lights at Maple Grove Raceway during Friday’s second qualifying session, obliterating both ends of the Reading, Pa. track record. The run was the first 339 mph NHRA pass since a 339.02 was recorded during the 2017 Reading event and the second-fastest run in NHRA history. Capps’ impressive performance during the second round of qualifying for the MOPAR Express Lane NHRA Nationals Presented by Pennzoil stood strong throughout Saturday and earned him the top spot among a loaded Funny Car class.

Before capturing the pole on Friday night, Capps and the Rahn Tobler-led NAPA Filters team unloaded with a best-of-class 3.849 E.T. during Q1 and solidified their position as a major threat when they closed out qualifying on Saturday evening by posting a 3.877 E.T., the second-quickest run of Q4.

“We feel great going into race day,” said Capps, who raced to the Reading winner’s circle in 2017. “Starting from the No. 1 spot today allowed us to test a little bit in Q3, and then typical Rahn Tobler, we went back up there for Q4, and he’s looking at points. We were surveying what everybody ran, and he was waiting to see what the quickest run was in front of us. We saw Bob Tasca run a 3.86 and we thought we could outdo that, but Tobler wanted to make sure we didn’t lose the run. We did a little test mode on Q3, and it shook, so I’m sure that Q4 run was him just getting down the track.

“Sunday is going to be such a different day; sunny, mid-80s, it’s going to be similar to what it’s been the past two years here,” remarked Capps of the drastically different weather conditions forecasted for race day. “But, I always brag about Rahn Tobler and his NAPA Know How, and how he is so good at adapting to conditions, and we’ll need every bit of his adaptability tomorrow. If you walk around the pits right now, you’d see a lot of parts coming off of cars and changes being made because the conditions will be so different than what they’ve been all weekend.”

Capps, who started the Countdown ranked fifth, earned eight bonus points for his stout performance throughout qualifying, putting him one step closer to his ultimate goal of a second Funny Car world championship.

“That 339 and these good numbers are all for naught if we don’t have a good Sunday. Really, Sunday is what counts, but we’ll take these eight qualifying bonus points because that right there is almost a whole position gained. Those Mello Yello points, they’re important, championships can be won or lost on those little points.”

Capps will start race day from the No. 1 spot for the 24th time in his career and second time in 2019. He will face No. 16 qualifier Mike McIntire Jr. in round one as he begins his crusade for a second Reading victory, and fourth of the season.

The Competition: No. 16 Mike McIntire 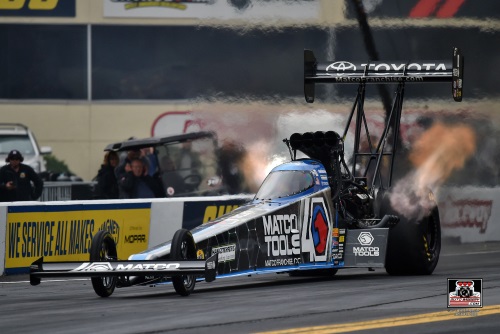 The Competition: No. 12 Terry McMillen

Quotable:
“We’re getting off to a great start, and that’s the key. Our Matco Tools Toyota boys, we came in here and we were bold. We tried some different stuff and it worked out for us in Q1. In Q2 and Q3 we were way over-aggressive, so we backed it off in Q4 to make it down the track. We feel really good going into race day, we’ve just got to take it one lap at a time and get after it.” 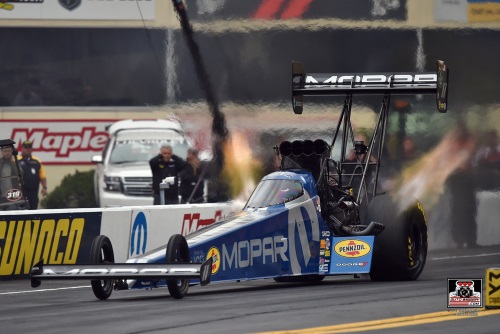 The Competition: No. 15 Lex Joon

Quotable:
“They say momentum is key, and we’ll take it. This place is known to be fast, and we’ve been known to go fast here. I’m looking forward to improving upon our performance on Sunday. This MOPAR hot rod is running clean, running nice. We came into this race with a strategy of qualifying well, finding our window. Q1 was a gnarly ride. We started over-center and backed it down, and we feel very good about where we’re at. It’s going to be great conditions tomorrow, and starting off with the first win light is key.

“It’s an honor to be the MOPAR flagship in Top Fuel and to lay down such incredible passes for the fans and for MOPAR and Pennzoil. They’re supporting us, and we have every intention to execute top-tier performance in every round tomorrow and get this Countdown started off right.

“After yesterday’s wild ride in Q1, I nicknamed this car Katniss Everdeen from The Hunger Games. I think that’s fitting. Everybody is out for themselves in the Countdown. This hot rod, she showed that she’s hungry and we’ve been letting her eat, putting down three solid passes, and tomorrow is the first round of The Hunger Games.” 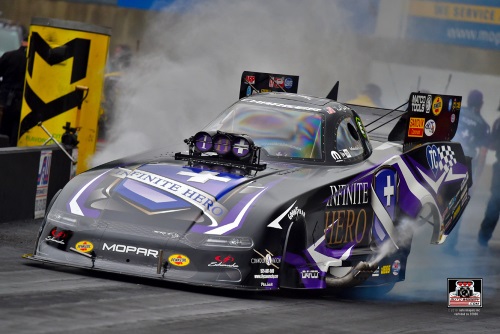 The Competition: No. 14 Jim Campbell

Quotable:
“The Infinite Hero machine was moving over toward the wall during the last qualifying run, and we don’t need to bang up anything there, so I clicked it early. I like our shot. We still have a good E.T., and we’ve got great data to go on. We went zero for two on Friday, and as far as I’m concerned, two for two on Saturday. Now it’s time to go four for four on Sunday.” 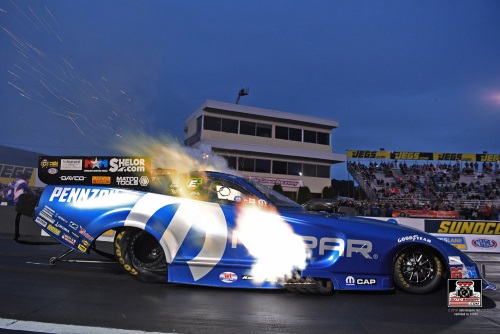 The Competition: No. 8 Shawn Langdon

Quotable:
“We won’t have lane choice, but it never matters if you don’t have it. This MOPAR Hellcat Widebody has been running pretty good. We’ve had three out of our four runs be very consistent – running 90s pretty much every time, so things look to be pretty equal. So, unless something major happens or the weather changes drastically, I think we’ve got a pretty solid hot rod to at least get down the race track and give it a good shot.” 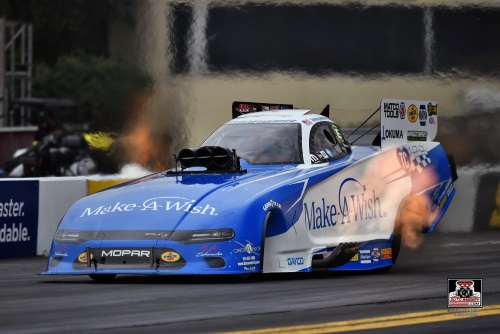 Quotable:
“We’ve got a really good Dodge Charger SRT Hellcat. We tried some stuff in that last qualifying session just to see if we could get away with it. Now we know that didn’t work. We’ve got a good consistent car, and that will go far tomorrow. I think conditions will be different tomorrow, and having a consistent car is what you are going to need. We’re excited about this being a MOPAR event and happy to have all the FCA executives out here with us. It worked out well for us in Denver, and we’re hoping to have the same results here tomorrow. A consistent car might be the thing you need in those conditions.”