READING, Pa. (September 14, 2019) — Brittany Force and the Advance Auto Parts Top Fuel dragster team would have been the Mopar Express Lane NHRA Nationals presented by Pennzoil’s No. 1 qualifiers simply off their Maple Grove Raceway track record pass from Friday night but they outdid themselves not just by being quickest of each session on Saturday but by laying down the quickest time in NHRA history in the last qualifying session.

“I thought where we stood Friday night was going to be pretty good and if we could match that I’d be pretty happy,” Force said. “What we just did right there, that was unbelievable.”

Force and her David Grubnic and Mac Savage tuned dragster carried over their momentum from Friday night’s track record run of 3.651-seconds to race a stellar 3.699 at 330.39 mph in warmer weather conditions on Saturday afternoon. With the closest opponent running a 3.705 in the third session, Force and the Advance Auto Parts team looked like they were in the clear to secure their third consecutive No. 1 qualifying position, seventh of the season and 17th of Force’s career. That didn’t stop the 2017 Top Fuel world champion from coming out in the final session to put on a world class show for the fans of Maple Grove Raceway. She would cross the finish line and light up the scoreboards with a national elapsed time record 3.623-second pass at 332.92 mph.

“That run was just outstanding. It felt fast. It was smooth, it was clean. It felt like it stayed straight in the groove and I was just hanging on. The end of the track came a lot quicker so I knew we were on a good run and they didn’t tell me the numbers until I got down on the top end so it felt good,” said Force who is the first female in 42 years to secure three consecutive No. 1 qualifiers. “I knew before I even got in the car. In the staging lanes Grubnic jumped in our Chevy Suburban tow vehicle and had a conversation with me and Skylar Blades on my team about what the plan was, what we were going to do and how we were going to set a record. He told me to hang on and to get the car down there, and we’d be pretty surprised on the other end. And I was. I did not think a .62. I didn’t ask him for a number but he said if we get down there it would be an awesome run and we’d set some records so it felt good to do that. Especially coming into this Countdown right now. This is exactly where I want to be, we’re picking up bonus points, we picked up nine this weekend and tomorrow we’ll be ready for race day.”

The national elapsed time record was previously 3.628-seconds, set by another Grubnic tuned machine at the 2018 Winternationals in Pomona, Calif. In 2016, Force had set the national record at 3.676-seconds at the Heartland Nationals in Topeka, Kans. She held the record until July of that year when it was lowered to 3.671-seconds.

Force will begin the first race day of the NHRA Countdown to the Championship, NHRA’s six race playoffs, matched up with Todd Paton.

John Force and the PEAK Coolant and Motor Oil / Blue Diesel Fuel Additives Chevy Camaro SS team jumped nine spots through Saturday’s qualifying. In his first pass, Force, with a repaired body, improved to run 4.001-seconds at 258.71 mph. After finding a problem between qualifying rounds, the PEAK / Blue Diesel Chevy Camaro team changed chassis and Force went into the final session handling his 11,000-horsepower machine to 3.889-seconds at 334.40 mph earning him one bonus point and moving him up to fifth. Force is set to go head-to-head with rival Cruz Pedregon in round one Sunday.

“Well, I gave up some points in qualifying because I got over on the cones last night but we found the problem and changed chassis and fixed it. ‘Old Blue’ I call it. We’ll see what we can do tomorrow in this hot rod,” said Force. “All of us are in the show tomorrow and it’s the Countdown. I’m excited to see what we can do and hopefully get all of our sponsors in that winner’s circle tomorrow.”

Two-time Funny Car world champion Robert Hight improved his performance on day two of qualifying when he powered his Auto Club Chevy Camaro SS through two consistent passes. Hight first laid down a clean 3.897-second pass at 331.36 mph and continued the upward momentum into the final session where he had a 3.895-second pass at 330.07 mph to start race day from the No. 6 spot. Hight will compete against Jonnie Lindberg in round one of eliminations.

“We didn’t make terrible runs today but it sure wasn’t what we were looking for. The clutch didn’t cooperate so I wish we had one more run to do it again but we don’t,” said Hight. “It’s going to be different conditions tomorrow and honestly; I think we can leave it alone exactly how it is and it will run the same when it’s hot. I think we have a good set up for race day.”

Austin Prock and the Montana Brand / Rocky Mountain Twist team will start race day at Maple Grove from the No. 6 spot off their impressive 3.697-second pass at 328.94 mph on Friday afternoon. Through Saturday’s final qualifying sessions, the Rookie of the Year candidate put up two consistent passes starting with a 3.762-second run at 325.14 mph and followed up with a 3.738 at 297.55 mph that would unfortunately end in an engine explosion.

“It was a little slow in the first run but we had a decent go in the second before we ran into a problem. We had some parts let go so it made a lot of work for us tonight. We have work to do to get ready for tomorrow morning but I know we’ll be ready. I get to race my buddy Jordan Vandergriff and it’s going to be a big moment, two Rookie of the Year candidates trying to get round-wins over each other. I hope we can get it done and go some rounds in this Countdown,” said Prock. “An early exit at Reading is never good, this is the easiest time to make up ground, its’ tightest points wise so we have to have a good day tomorrow and at least go to the semifinal if we want to be in contention for this championship.”

Eliminations at the Mopar Express Lanes NHRA Nationals presented by Pennzoil are set to begin Sunday at 11 a.m. Television coverage will be live on FOX Sports 1 (FS1) starting at 2 p.m. ET. 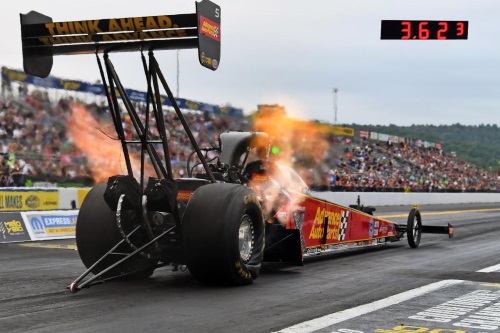 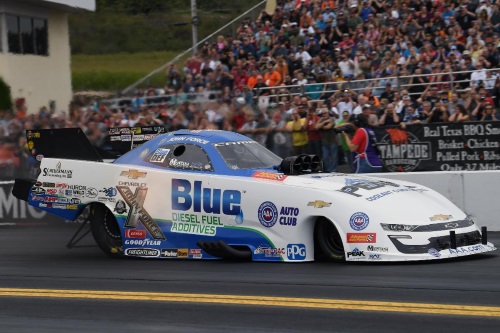 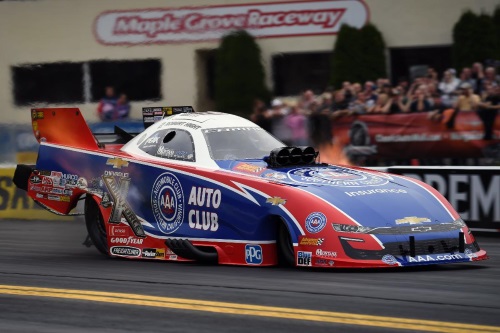 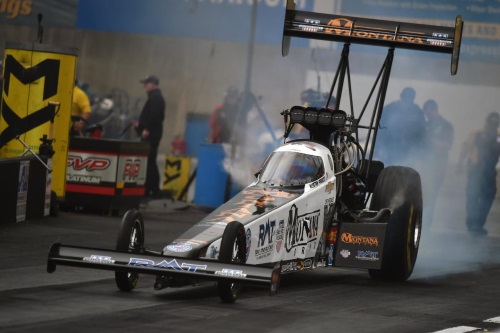