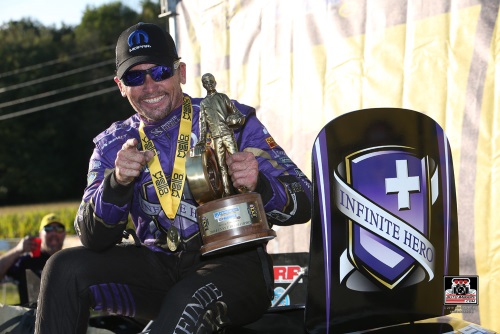 MOHNTON, Pa. (September 15, 2019) – The thrill of victory has been within his grasp several times in 2019, but Sunday in the final round of the 35th annual MOPAR Express Lane NHRA Nationals Presented by Pennzoil at Maple Grove Raceway near Reading, Pa., Jack Beckman seized the opportunity and registered his first Funny Car victory of 2019.

Two weeks after coming up agonizingly close to victory in the final regular season event of 2019 near Indianapolis, the driver of Doug Chandler’s Infinite Hero Foundation Dodge Charger SRT Hellcat Funny Car was not going to be denied in the critical first event of the six-race Countdown to the Championship playoff series. Beckman defeated John Force in the final and captured his third career victory at Maple Grove and 29th of his career, and by doing so took over the points lead in the Countdown standings.

“Fans come up and say ‘are you going to win this weekend?’ and I say yes. Every single race I say ‘yes’ because there’s no reason to think we can’t win,” explained Beckman of his previous four runner-up finishes in 2019. “We’ve got the tools, we’ve got the parts, we’ve got the people, and I’ve been wrong eighteen times this year. And then you don’t know, when you’re down to just six races left and you look at the caliber of cars out here, you don’t know if you’re going to be able to win a race. I know we have a car capable of winning a race, I know if I drive up to my potential we have a driver capable of winning a race, and sometimes it’s just trying to find both of those on the same day.”

Beckman’s path to victory started from the third position following consistent qualifying runs in sessions three and four. The 2012 Funny Car world champion rolled past Jim Campbell with a 3.908 E.T., the second-quickest run of the first round and race day. Beckman then squared off with former champion Robert Hight, who led the points coming into the Countdown, and delivered another solid pass while Hight smoked the tires at the hit of the throttle. In the semifinal, the results were the same with crew chiefs Dean Antonelli and John Medlen tuning Beckman’s machine to another clean and consistent pass while his opponent, J.R. Todd, lost traction and coasted to the finish.

In his 61st career final, Beckman battled Force for the eighth time in the finals, and first at Reading. He wasted little time by rolling in quickly and used quick reflexes to post a .028 reaction time versus a .068 light for Force. Beckman’s light was the difference with his 3.958 seconds at 330.07 mph pass turning on the win light over Force’s run of 3.952 seconds to give him a holeshot victory and his first triumph piloting a Dodge Charger SRT with the Hellcat body.

“To win on a great side-by-side race, and to do it on a holeshot, that’s just awesome,” said Beckman. “If you’re going to win a race, the way to do it is a close side-by-side one like John and I had in the final.

“Winning this one is extra special for a few reasons: it’s our first win in the SRT Hellcat, all of our teammates have already done that, we took over the points lead, and it’s been way too long since we’ve been to the winner’s circle. For a shot in the arm, for a psychological boost, for that mental edge, that intangible that I think you need to be able to win a championship, this might be the thing that is the first step for us.” 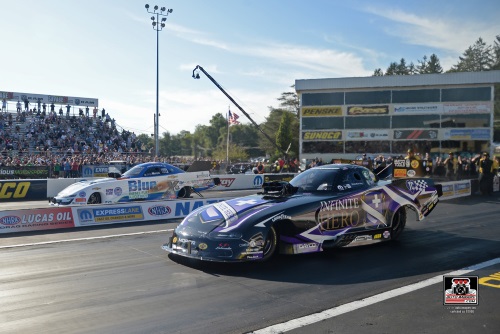 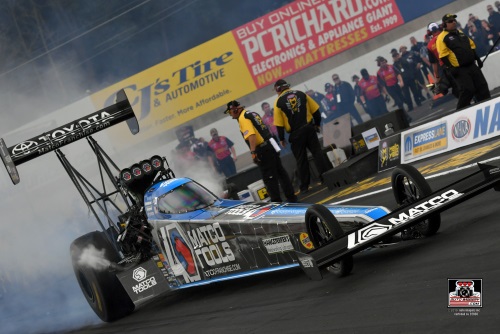 Race Recap:
Antron Brown continued his trend of winning at least one round at 12 of the past 13 events, but was hoping to add to his 2019 round win total by claiming his first event victory of the season on Sunday at Maple Grove Raceway. As the No. 5 qualifier, Brown faced Terry McMillen in the opening session, and his quick reaction time coupled with a 3.743-second E.T. awarded him the round win versus McMillen’s tire-smoking effort. Unfortunately, the two-time event champion’s hopes of another Reading Wally trophy went up in smoke when his machine immediately lost traction against Richie Crampton in the quarterfinals, allowing Crampton to take the round win.

Quotable:
“We came out and qualified well and learned a lot. This isn’t the result we wanted. We wanted to get past round two, for sure. Race day could have been worse, but it also certainly could have been better for this Matco Tools Toyota team. We’ll take what we learned from here and move forward for St. Louis. We have to keep on pushing. We’ll keep our heads down, stay poised, and get after it. We have to learn from this and be better.” 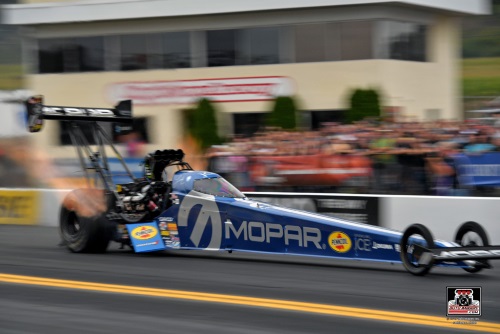 Race Recap:
After an impressive qualifying performance which included powering to the second-quickest E.T. of three consecutive sessions, Leah Pritchett qualified second for the MOPAR Express Lane NHRA Nationals Presented by Pennzoil. She began Sunday’s elimination rounds with another consistent run in her MOPAR-powered Top Fuel dragster to score the opening-round triumph over Lex Joon. In the quarterfinals, the eight-time race winner took on Austin Prock for the fourth time in 2019. Pritchett was looking to make it consecutive wins over the rookie driver, and she launched from the starting line first. Both Countdown contenders quickly lost traction near the 150-foot mark and a pedalfest ensued. Pritchett got back in the throttle twice, but a small engine backfire activated the mandated NHRA safety mechanisms which deployed her parachutes, ending Pritchett’s chances of catching Prock.

Quotable:
“What an eventful weekend. Ultimately, we have a better car, package, and team than our results show, and that is what is most frustrating. Our quick and consistent qualifying was no accident, neither was our first-round win. Our second-round elimination was not a factor of tuning up too far over-center for the competition, but merely blindly adapting to less track prep conditions than the previous two days of qualifying, which resulted in us smoking the tires against Austin Prock, one of our strongest rivals. We still believe we have a better package this last quarter, and we are excited about our full potential showing through in St. Louis as it did in Brainerd.” 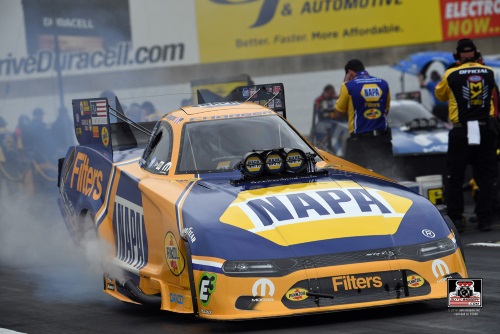 Behind the NAPA Filters Dodge Charger SRT Hellcat, Capps captured his 24th career No. 1 qualifier on the strength of his track record-setting and career-best run of 3.837 seconds at 339.28 mph in Friday night’s second qualifying session. He collected eight bonus points for his strong qualifying performance which also included a session-best run in Q1, and the second-quickest pass of Q4.

As the No. 1 qualifier, Capps drew nitro rookie Mike McIntire Jr. in the opening round of eliminations, and started his race day with a win light when his 3.909-second pass easily defeated McIntire’s tire-smoking effort.

In round two, Capps faced teammate and fellow Countdown contender Matt Hagan. Against, Hagan, Capps was flawless, using a quick reaction time coupled with a stout 3.916-second pass to earn the win and advance to the next round. The semifinals featured another match-up rife with Countdown implications, with Capps battling it out with John Force. Capps had a sizeable starting line advantage against Force, but his car lost traction just before half-track, causing him to slow and allowing his opponent to drive past for the win.

Quotable:
“This was a wild weekend. It was crazy for us to come here with a game plan to work on, knowing the cool temperatures that faced us on Friday and Saturday, especially since we’ll likely see similar conditions later in the Countdown. Then, to go out and set the track records, that was fun because I knew what we were trying to do, and it was neat to go out and watch a plan come together.

“We also knew that the conditions today were going to be completely different – mid-80s and hot. (Crew chief) Rahn Tobler is so good at adapting to the changing conditions, and it was fun to watch him approach today like he did.”

“We definitely made up some ground in the points, and that’s something we discussed heading into the Countdown. We want to gather up all the small points that we can. There are so many good race cars out here, but to be able to gain eight points during qualifying, that’s almost a full position. We’re off to a good start. We’ve said it before, you can’t win the Countdown in Reading, but you can certainly put yourself out of position to win it, and I think we had a good solid weekend.” 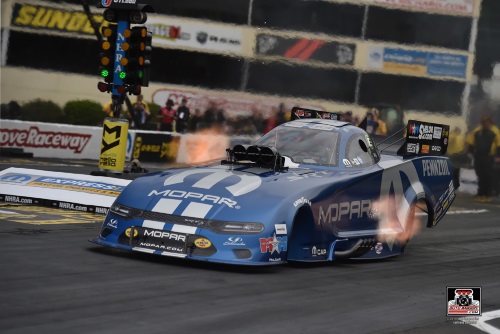 Race Recap:
Matt Hagan has raced to a semifinal finish or better at six of the last seven events and was hoping to continue his trend of ‘going rounds’ at the first event of the Countdown to the Championship. He began his quest for a second Reading victory with a match-up versus fellow Countdown contender, Shawn Langdon. It was apparent crew chief Dickie Venables wasn’t taking Langdon lightly when he tuned Hagan’s MOPAR-powered Dodge Hellcat to a stout 3.899-second pass, which held up to be low E.T. of race day. The two-time Funny Car world champion then drew teammate Ron Capps in the quarterfinals, and despite the advantage of lane choice, was unable to defeat Capps when his machine annihilated the tires as soon as he stood on the gas. Hagan attempted to pedal it, but Capps’ clean pass enabled him to take the easy round win.

Quotable:
“First round losses are the kiss of death with the Countdown. We got past the first round, and we have five races left going into St. Louis. It was a hot, greasy track today. Avoiding that first round loss is key, and we did that. We had a good, fast race car beside us with Ron and we had to push it a little bit. They went 3.91, which was low of the session, and our lap wouldn’t hold. We’ll roll into St. Louis with a great MOPAR team, and there’s a lot of racing left in 2019.” 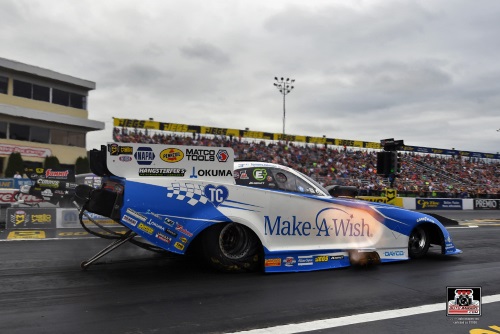 Race Recap:
Tommy Johnson Jr. won his first-ever Funny Car Wally at Maple Grove Raceway back in 1999, and the two-time 2019 winner was looking to get a jumpstart on his run for a first NHRA Funny Car world championship with a long race day of going rounds. After qualifying the Make-A-Wish Dodge Charger SRT Hellcat Funny Car seventh, Johnson began eliminations ranked second in the season championship standings, and his first-round opponent was reigning Funny Car champion J.R. Todd. Johnson and Todd were nearly even at the starting line, but Johnson, a two-time Reading winner, slowly lost ground during the race to 1,000 feet. Todd’s quicker run of 3.915 seconds was enough to defeat Johnson, who posted a pass of 3.977 seconds.

Quotable:
“Today certainly wasn’t ideal. We ran decent in qualifying and coming off of such a great season so far, I had high hopes for the Countdown, but starting off with a first-round loss isn’t what we had planned. Not totally demoralized by it, but we have our work cut out for us now. We’ll have to do exceptionally well at the last five to regain our position if we want any shot at the championship. I’m sure over the next week or so we’ll reevaluate and see if we can’t turn things around in St. Louis and keep a shot at the championship.”