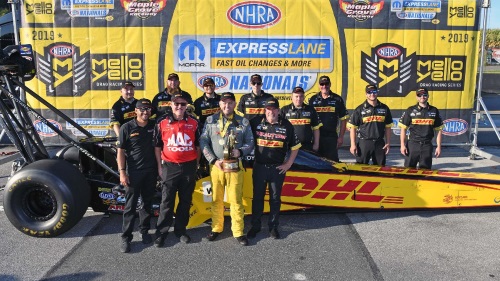 Richie Crampton and the DHL Top Fuel dragster team picked up their second win of the season and make a major jump in the Countdown to the Championship points with a win today over teammate Doug Kalitta at the NHRA Nationals in Reading, Pennsylvania. The No. 4 qualifier raced his way past Dan Mercier, Antron Brown, Brittany Force and new Mello Yello Top Fuel point leader Doug Kalitta to earn his 10th career Top Fuel win.

“It’s a huge win for us. I’m so lucky to be a part of this team,” said Crampton. “I hated to race my teammate, Doug Kalitta, in the final and win, but it was a great day for the whole team. We had three real strong runs to close out qualifying (including a 3.689), so we knew we had a car that could contend. Then we had another strong run in round one and made another solid pass in the second round. In the finals, we had a pretty good light and made a really good pass to beat a great driver and team.”

“For DHL, Toyota, Wix, Global and everyone who’s stayed behind us, this is big. It’s the business time of the year. It’s just so important to get round wins and try to run for a championship. We’ve shown we have a car capable of competing for a championship. Now we just need to keep digging in these last five races,” added Crampton.

In the first round Crampton got the jump on journeyman Dan Mercier and never trailed in the race. His 3.733 second elapsed time was quick enough to give him lane choice in the second round and set up a tough match-up with fellow Countdown contender Antron Brown.

The quarterfinal match-up between Crampton who started the Countdown in the No. 9 position and Brown who was trying to hold his No. 3 position was another dominating run by the DHL team and Crampton. By the 60 foot maker Crampton was pulling away from a tire-smoking Brown. Crampton’s winning elapsed time of 3.781 seconds set him up with lane choice for the third time on Sunday.

The semifinals were anti-climactic for Crampton but not without a little drama. Following her burnout Brittany Force’s dragster sprung a fuel leak and had to be shut off handing Crampton a free run into the final round. As Crampton took off his DHL dragster overpowered the track and smoked the tires. He was able to click his 11,000 horsepower dragster off and coast to the win with a pedestrian 4.656 second run at 164.57 mph. The round win advanced Crampton into his second final round of the season.

It was an all Team Kalitta final round as Crampton squared off with newly crowned points leader Doug Kalitta and his Mac Tools Top Fuel dragster. At the hit of the throttle Kalitta grabbed a slight starting line advantage but as both dragsters launched down track Crampton had made up the difference and was pulling away for the win. Through four rounds of eliminations Crampton and his DHL Top Fuel dragster never trailed beyond the 60 foot marker.

Crampton’s four round wins moved him up to the No. 5 position in the Mello Yello point standings. It was an impressive four position jump leaving the first playoff race of the season. The young Australian is just 21 points, barely over one round, behind the No. 2 Top Fuel team.

“Our team is aware of the points and we know the pressure is on,” summed up Crampton. “I just have to do my job. I feel like I have a great car right now. We ran really well in qualifying at Indy and were near the top of the sheets. So we knew we could run with anyone out there. Connie (Kalitta) and Kurt (Elliott) are doing a great job on my DHL Toyota dragster. It’s been a long season, but this is when it all counts.”

Quotable:
Richie Crampton on first race of the Countdown: “This is what we were shooting for coming into the Countdown. We wanted to get off to a good start and make a move up the points at the first race. We have some momentum and I can’t wait to get to St. Louis.” 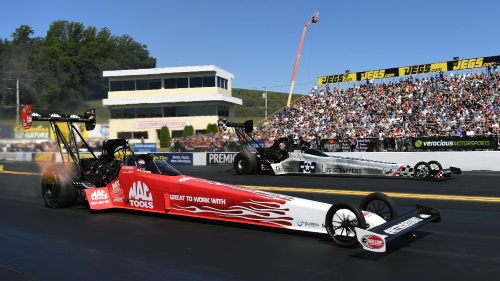 “Not exactly how we wanted to finish out the day, but if you have to lose, at least it was to one of our teammates,” said Kalitta. “It was a good race and we ran pretty well, but Richie and the DHL guys made a really strong run. The first two rounds we went down the right lane, so I was a little nervous going down the left lane in the semis but the TRD Toyota guys are out there looking at both lines. I’m just really proud of those guys and my entire Mac Tools team.”

Throughout qualifying Kalitta and the Mac Tools dragster were consistently near the top performers earning qualifying bonus points as one of the three quickest dragsters in three of the four qualifying sessions. The reigning U.S. Nationals champion was able to head into race day as the No. 3 qualifier.

In the first round Kalitta and his Mac Tools teammates did not take Smax Smith lightly posting a solid 3.722 second run at 330.96 mph run for the win. As Kalitta advanced to the second round he also moved into the points lead for the second time this season. The sure fire Hall of Fame driver held the points lead following his season opening win at the Winternationals. He entered the Countdown as the No. 2 driver and over the course of the day extended his lead to ultimately 33 points over the No. 2 driver.

The semifinal race between Kalitta and rookie Austin Prock was a nearly identical race to Kalitta’s quarterfinal win over Mike Salinas. Kalitta ran identical 3.740 second passes in both races and tripped the speed trap at basically 330 mph in each race, 329.83 mph and 333.91 mph. The 329 mph pass was Kalitta’s lone sub 330 mph run of the day.

The final against Crampton was a chance for Kalitta to extend his Mello Yello points leader and continue a win streak that began with his first U.S. Nationals victory two weeks ago. Kalitta grabbed a starting line advantage but Crampton’s DHL dragster pulled beside and him and drive away for the win. It was a tough final round but one that Kalitta knew had no downside.

Quotable:
Doug Kalitta on first racing of the Countdown: “We were going for two wins in a row and we ran into a tough customer in my teammate Richie (Crampton) in the final. It is great to race your teammate in the final round and we gave him everything we had. This Mac Tools team has the points lead and we are going to get reading for St. Louis.” 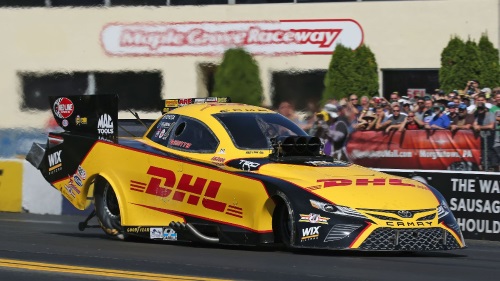 J.R. Todd Jumps Up in Points with Semifinal Finish

A repeat performance of last year’s J.R. Todd Countdown winning performance in Reading, Pa., was not in the cards today for the reigning Funny Car champion. The DHL Toyota Camry Funny Car team did advance to the semifinals before losing to eventual race winner Jack Beckman. The semifinal finish did jump Todd and his DHL team up two places in the Countdown and they are less that a round out of fifth place with five races left in the playoffs.

The back-to-back semifinal finishes over the past two races have Todd encouraged as the Countdown gets underway. While qualifying was a struggle for Todd and the DHL team a first round upset win over No. 7 qualifier and Countdown contender Tommy Johnson Jr., gave the team some momentum for the rest of Sunday. The team stepped up and made their quickest pass of the weekend for the win and set up a second round race against surprise first round winner John Smith.

In the quarterfinals it was another quick run for the DHL Toyota Camry Funny Car as they outpaced Smith 3.949 seconds to 4.013 seconds. The win gave Todd a boost in the points and set up a semifinal race against another Countdown foe.

Todd’s final run of the day saw the DHL Toyota Camry overpower the track as he fought valiantly to get his Goodyear slicks to hook up. Todd was on and off the throttle a number of times but he could not reel in his opponent. At the end of the day Todd jumped up in the points and positioned himself for another move heading to St. Louis in two weeks.

“We had a race car that could have won the race today for sure,” said Todd. “I am encouraged by the overall performance of the DHL Toyota team and we have some ground to makeup in St. Louis. The first round win was huge and gave us a big boost. The key to success is to avoid first round losses and win rounds on Sunday.”

Quotable:
J.R. Todd on first race of the Countdown: “We made up some ground which is good. I would have loved to have won this race again but we closed the gap on a lot of teams and my DHL Toyota Camry Funny Car definitely came around on Saturday and today. I like the direction we are going.” 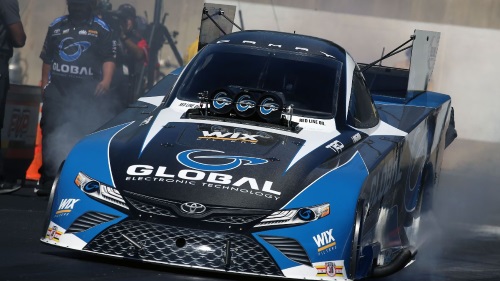 Shawn Langdon and the Global Electronic Technology Toyota Camry Funny Car wrapped up their race day at Maple Grove Raceway earlier than expected. Heading into the second day of qualifying on Saturday Langdon and his team were furiously trying to battle their way into the top sixteen Funny Cars. Storm showers were rolling through eastern Pennsylvania and Langdon team stepped up rocketing him to the No. 8 qualifying position.

The two up and down days of qualifying set the Countdown contending team up with a tough first round match-up against another Countdown team. Langdon was up to the task taking a solid starting line advantage with a .052 to .072 reaction time advantage. Both Funny Cars were charging down the track up Langdon’s opponent laid down the quickest run of the first round a 3.899 second pass that was too quick for the Global Electronic Technology Camry Funny Car’s 3.961 second pass.

“I felt really good going into the first round,” said Langdon. “We made some good changes on Saturday that set us up to have lane choice. We had seen seven pairs run in front of us so we knew a lot about how the lanes were holding up. I think you saw from the performance of this Global Electronic Technology Camry that we had a race car that could have won rounds today. We just got a bad draw against the quickest run of the first round.”

With five races remaining Langdon has plenty of time to move up in the point standing and capture his first Funny Car world championship.

Quotable:
Langdon on first race of Countdown: “This isn’t the way we wanted to start the Countdown. The good news is some of the top teams also went out early and we are still very much in this championship battle. We are going to take the positives from this weekend and build on them for St. Louis.”