MADISON, Ill. (September 25, 2019) – Robert Hight will gladly take a repeat of everything that took place a year ago in St. Louis, except for what happened just past the finish line in the finals. Moments after winning the AAA Insurance NHRA Midwest Nationals at World Wide Technology Raceway last year, the Funny Car star was involved in a top-end crash past the finish line. Hight broke his collarbone during the crash, but showed great resiliency returning to action at the next race.

It made for some thrilling dramatics in the Mello Yello Countdown to the Championship, but Hight would like to avoid those this year he aims to win his third NHRA Mello Yello Drag Racing Series world championship. He’s currently third in points in his 11,000-horsepower Auto Club Chevrolet Camaro SS after the first of six playoff races, and could make up ground with a second straight St. Louis win – this time with less top-end fireworks, preferably.

“The fans that come to Gateway (World Wide Technology Raceway) are great people who want to see some good, fun racing, and I hope this year we can win again without having to go through that,” Hight said, referencing the top-end crash from last year. “I’m proud my sponsor is a sponsor for half the races in the Countdown and I want to go to those races and do a good job for them. The past couple years we’ve done really well at those races, so hopefully we can keep that going.”

Steve Torrence (Top Fuel), Hight (Funny Car), Tanner Gray (Pro Stock) and Matt Smith (Pro Stock Motorcycle) were last year’s winners of the event that will be televised on FOX Sports 1, including live final eliminations coverage starting at 2:00 p.m. (ET) on Sunday, Sept. 29. It is the 20th of 24 races during a 2019 NHRA season where Hight dominated the bulk of the regular season.

He won five races and was points leader for the first 18 races of the season, as Hight and teammate John Force formed a formidable duo. The points reset to open the playoffs and a second-round loss at Maple Grove Raceway bumped Hight down to third after Jack Beckman knocked off Force in the final round. That means Hight has some work to do, but the team had a productive test session and he feels confident heading into St. Louis.

“It went really, really well and was probably one of the most productive test days we’ve had,” said Hight, who has 50 career Funny Car wins. “We have had some trouble smoking the tires early, so we were able to get it to where it would run good and stay hooked up. We did that three runs in a row and that was very encouraging. If John and I do what we’re supposed to do, it could come down to him and I racing for a championship. A lot of great cars are going to have a say and it’s really bunched up, but I feel like if we do our job, we have the cars to beat.”

Beckman got hot at the right time in Reading, winning his first race of the year to hold a lead of 19 and 24 points over Force and Hight, respectively. Ron Capps is right behind Hight, while Tommy Johnson Jr., Matt Hagan and defending champ J.R. Todd are all within 90 points of Beckman. Hight, though, feels good when it comes to not only what his team is capable of, but also the prospects of the entire John Force Racing organization. Brittany Force and Austin Prock are in the thick of the Top Fuel hunt and that four-car camaraderie has had a distinct effect on everyone. 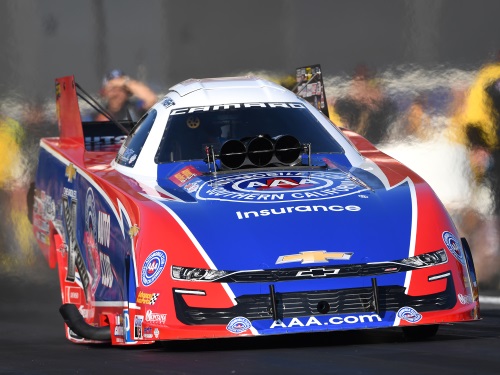 “It’s probably the best shot for a championship for all four cars that we’ve ever had,” Hight said. “It’s about putting the right people together. You can’t have any one team on an island. You really have to have people who work well together and that’s what we have on this team. All the Funny Car crew chiefs work exceptional together. There’s not a run that goes by where they’re not working together and that’s big, having all the right people together on the same page.”

Steve Torrence will look to get a second straight St. Louis win after the defending Top Fuel world champ opened the Countdown to the Championship with a first-round loss this year. He’ll face off against points leader Doug Kalitta, Reading winner Richie Crampton and Antron Brown.

In Pro Stock Motorcycle, Jerry Savoie has won back-to-back races, including the playoff opener, to take a slim lead over Andrew Hines, who was dominant in the regular season. Others to watch include defending event winner and world champ Matt Smith, Hector Arana Jr. and Eddie Krawiec.

The AAA Insurance NHRA Midwest Nationals will also feature thrilling competition in the E3 Spark Plugs NHRA Pro Mod Drag Racing Series presented by J&A Service, which will have its 10th of 12 races in 2019. The series will be presented by the Real Pro Mod Association in St. Louis, and the defending event winner is current points leader Stevie “Fast” Jackson. The event includes the NHRA Lucas Oil Drag Racing Series as well, where the future stars of the sport earn their racing stripes.

NHRA fans can take part in the Mello Yello Walking Tour to see the cars and teams hard at work in the pits. Fans can also attend Pro Stock Motorcycle School and Nitro School to learn how the cars operate and reach their thrilling speeds. World Wide Technology Raceway will also host a Mello Yello autograph session and allow fans to meet their favorite drivers as well as the Cruising with Castello Sealmaster Track Walk hosted by NHRA announcer Joe Castello. Another can’t-miss experience is the winner’s circle celebration on Sunday after racing concludes. NHRA fans are invited to congratulate the winners of the event as they celebrate their victories.

To purchase general-admission or reserved seats, call (618) 215-8888. Tickets also are available online at www.gatewaymsp.com. Kids 12 and under are free in general admission areas with a paid adult. For more info about NHRA visit www.NHRA.com. 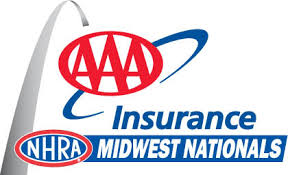