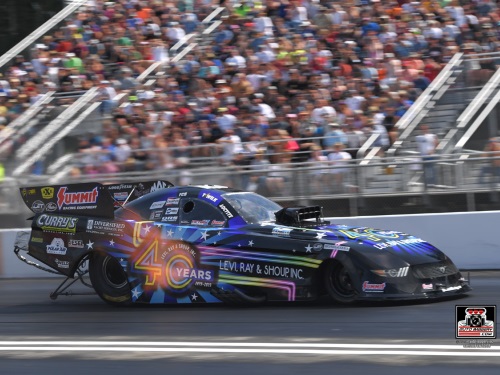 Mello Yello Series Countdown to the Championship, race 2 of 6

Driver Notes:
Wilkerson was in the final at Gainesville, Las Vegas, and Atlanta this year. He was the No. 1 qualifier in Las Vegas.
The early portion of Wilkerson’s career included a successful run as a Top Alcohol Funny Car driver. He earned eight division trophies, one national event win, and was the Division 3 Top Alcohol Funny Car champ in both 1994 and 1995 in the Lucas Oil Series before stepping up to the Pro ranks in Gainesville in 1996.

Wilkerson at the NHRA Midwest Nationals in St. Louis

Last year: Qualified No. 6; final round

Quote:
“St. Louis is going to be a big race for us, and hopefully we’ll have something for them like we did last year. That was a very good weekend, and if we can keep our momentum up and go a couple of rounds at a time like we did last year, we’ll be in good shape. I’m excited – we have a pretty decent car with this 40th anniversary Ford Mustang. To head to our home track and have everybody cheering for us, that’s a lot of fun. Our sponsor, Dick Levi, was real pumped after we won first round in Reading; it’d sure be cool to get a win for him and all the folks who stand behind us. It’s going to be a good Countdown.”

Join the conversation by using #MidwestNats #NHRACountdown on social media