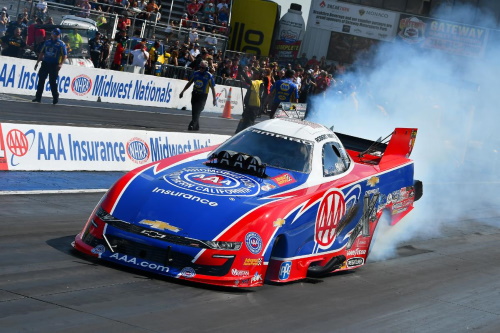 Coming into race day as the No. 4 qualifier and defending event winner, Robert Hight had a clean solid pass for the warmer weather conditions in the first round against Bob Bode. The AAA Missouri Chevy ran 3.921-seconds at 331.85 mph to defeat Bode’s 4.013-pass at 320.36. Hight would then line up with veteran racer and 2016 world champion Ron Capps in the quarterfinals.

Hight had the starting line advantage but Capps would gain on him before smoking the tires allowing Hight to cross the finish line with a 3.988-second pass at 323.27 mph while Capps had only a 4.272 pass at 225.52. Hight would run into trouble of his own in the semifinals, going up in smoke immediately after hitting the throttle handing reigning world champion J.R. Todd the win with a 3.979-second pass at 325.37 mph to Hight’s eventual 12.733.

“The thing to focus on is that we got the points lead back. We’ve only trailed in points once this year and that was coming into this race. We’re back in the lead now. It’s a tough Funny Car class, one of the most competitive there’s ever been,” said Hight who had led the points all season until the Reading Nationals two weeks ago which had him coming into the weekend sitting third. “It’s a sponsor race so I wanted to get this AAA Missouri Chevy in the winner’s circle again, but the second-best thing would be to get them back the points lead. Luckily there are four races left. We qualified well, ran well except for that semifinal so I’m not worried. We’ll head to Charlotte and pick up those little points in qualifying and go rounds on Sunday, just keep picking away at this championship chase.” 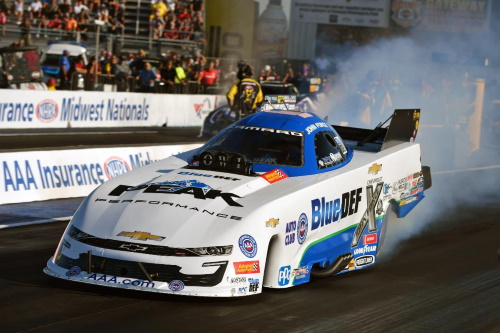 Starting eliminations at World Wide Technology Raceway from the No. 1 spot, John Force and the PEAK Coolant and Motor Oil / BlueDEF Chevrolet Camaro SS team lit the scoreboard with a 3.939-second pass at 326.08 mph for a round one win over Terry Haddock who had a 9.152-second pass at 77.06 mph after smoking the tires. In the quarterfinals, Force who was quicker on the tree with a .23 light, smoked the tires down track for only a 4.870-second pass at 169.55 mph against eventual race runner-up J.R. Todd who ran 3.986 at 326.56. Despite the second-round exit, Force held onto his No. 2 points position.

“Well, I didn’t win the race but I didn’t get hurt that much either, I’m leaving here second where I was and that isn’t bad. Robert is in first, where he’s been all year. Being out here, it’s not just about me trying to win a championship, its about building teams. Robert and I in Funny Car, and Prock and Brittany in Top Fuel, we built four great teams,” said Force. “Three of us are leaving in the top four and Prock, he’s in the Countdown and he’ll move up. We’re all running for the championship and I’m just proud of my PEAK BlueDEF team this weekend. We’ll just see where it goes.” 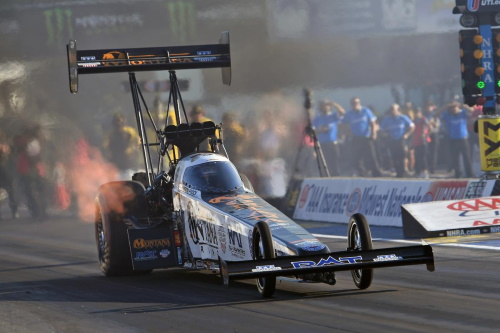 Austin Prock, who qualified third, powered his Montana Brand / Rocky Mountain Twist hot rod to a solid 3.744-second pass at 326.00 mph for the win light against T.J. Zizzo in the first round. It was the quickest pass of the Top Fuel session and bettered Zizzo’s 3.769 at 329.75. Racing Leah Pritchett in the quarterfinal, Prock, with a .050-second reaction time to Pritchett’s .064, had the starting line advantage but ran into trouble down track when his Mike Green and Ronnie Thompson tuned hot rod dropped a cylinder. Prock crossed the finish line at 3.925-seconds and 309.06 mph, falling short of Pritchett’s 3.835 at 321.88.

“All in all, a good weekend; probably our best performance all year. I felt like we were the car to beat this weekend and we had a cylinder go out in the second round. I’m really proud of what this team did. We were running within a few hun (hundredths of a second) every time we got up on the starting line and we were leaving the starting line first, too. If we can keep that momentum up and catch a break and not make any mistakes, we’re going to be really tough to beat,” Prock said. “We’re still in this deal. A lot of cars in front of us went out first round and we advanced to the second round. Even though we didn’t make it to the semifinals, overall not a bad points day and just proud of what this team has become.” 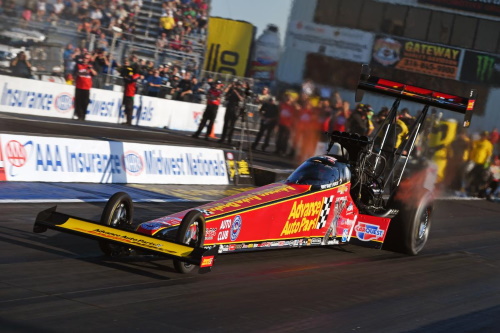 A hole out slowed the Advance Auto Parts Top Fuel dragster to a 3.802-second pass at 294.31 mph to send Brittany Force and her David Grubnic and Mac Savage led team packing up early as they were outran by Pat Dakin’s 3.793 at 327.27 in the first round at the AAA Insurance Midwest Nationals.

“Tough day out here in St. Louis with this Advance Auto Parts team. We qualified well, No. 4 and unfortunately got beat in the first round,” said Force, who leaves St. Louis fourth in points. “We had holes out 300 feet out and then threw the belt (at) 700 feet, so we were just coasting to the finish line and Pat Dakin got around us. It was a tough day for us, but we’re staying motivated and we’re still good in points and we can still beat this thing. We’ll be ready for Charlotte.”

The NHRA Mello Yello Countdown to the Championship continues with the third of six races, the NTK NHRA Carolina Nationals at zMAX Dragway outside of Charlotte, N.C., Oct. 11-13.