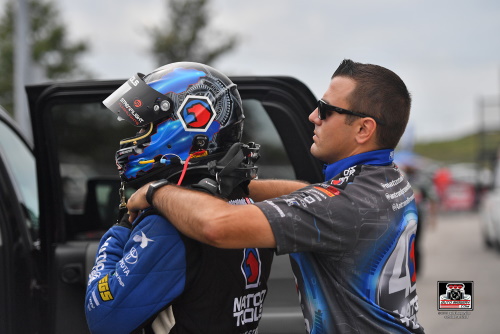 Race Recap:
With five World Wide Technology Raceway victories, Antron Brown is the winningest driver in the Madison, Ill. venue’s history. He was hoping to extend his NHRA Midwest Nationals Wally trophy count to six on Sunday, but a first-round loss to teammate Leah Pritchett dashed his chances at capturing his first event triumph of the 2019 season.

The Matco Tools Toyota made three consistent runs during qualifying, but Brown’s best run of 3.748 seconds wasn’t quick enough to crack into the top half of the field, setting up an intramural battle with his stablemate to start race day. The three-time Top Fuel world champion had the starting line advantage but was up in smoke before the 300-foot mark, giving up the win to Pritchett who made a clean pass.

Quotable:
“That was not the way we wanted things to go. We felt like we had a concrete game plan going into today. We were right there at the right spot, and these rounds we’re losing are so crucial right now. In hindsight, we’re learning things as we do it. You never learn anything unless you’re struggling – and we’re struggling right now. We have Charlotte coming up. We’ll go back and do our homework and then come out and be ready. This race is over. We just have to hope we don’t lose too much ground on the people in front of us. A few key players went out in the first round as well, so that will help us a little bit. But we just can’t depend on people losing first round. We have to go rounds and just keep pushing hard and try to get back in the hunt. We have four races left after this, and we’re going to need to be pretty much flawless at each of the last four to be where we want to be – and that’s the top spot.” 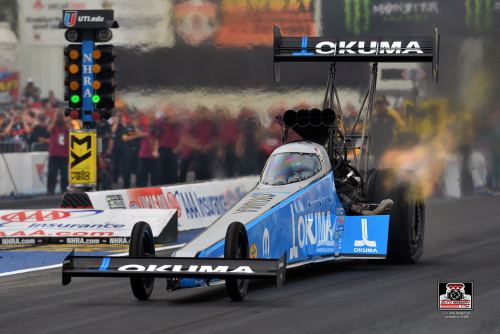 Pritchett made three stout runs during qualifying to pick up three bonus points and qualify the Okuma machine sixth. She found herself lined up opposite three-time world champion and Top Fuel teammate Antron Brown to open eliminations on race day. Brown immediately drove into tire smoke while Pritchett made a clean run of 3.764-seconds to advance to a second-round match-up against Austin Prock. Pritchett was looking to avenge a quarterfinal loss to Prock two weeks ago during the Countdown opener in Reading, Pa. The eight-time Top Fuel winner powered to victory with her 3.835 E.T. to reach her second consecutive St. Louis semifinal. She was working to reach her second final in four events by taking down Billy Torrence in the semis, but despite a starting line advantage, she wasn’t able to claim the round win when her machine overpowered the track and started losing cylinders, ultimately allowing the elder Torrence to drive away with the win.

Quotable:
“We definitely have a lot of momentum, and that’s what we’re focusing on right now. It felt good to get two win lights. We picked up a couple of spots in the points, and that’s what we’re focused on. We have a good hot rod, and we keep opening up our possibilities just like Okuma stands for. Immediately after our semifinal loss, the amount of in-depth research to figure out how and why we had a malfunction that caused that loss was immense. We’re pushing really hard, and that’s what the Countdown takes. We’ll regroup and focus on getting our hot rod back in the winner’s circle.” 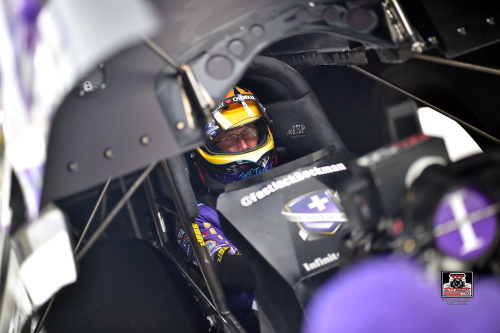 Race Recap:
“Fast Jack” Beckman opened the Countdown two weeks ago with a thrilling triumph in Reading, Pa., and was looking to maintain his position on top of the standings this weekend in St. Louis. After earning the second, first, and third qualifying positions, respectively, at the previous three events, Beckman found himself starting from unfamiliar territory in the No. 9 position on Sunday morning. The 2012 Funny Car world champion drew reigning Funny Car champion J.R. Todd in the first round of eliminations. Beckman clocked a strong 3.944-second pass in the Infinite Hero Foundation Dodge, but his opponent’s small starting line advantage enabled him to swipe the holeshot win.

Quotable:
“We missed the beat here this weekend. We made it down the track two of four qualifying sessions, and our car the last two races had been absolutely stellar. I don’t think by any means we were lost. I was very confident heading into race day. The bottom line is this one goes down as a holeshot loss, and that was on me. Had my right foot been three-thousandths of a second quicker, we wouldn’t be talking about this; we’d be heading into the next round and racking up points. I feel like I let the team down. I just needed to have a faster light. If you lose by a bunch, you shrug your shoulders and look at data and go on. When you lose by two-thousandths of a second, you second guess yourself a whole bunch. I think we’ve got to move past that and unload in Charlotte and get ready to win that one.” 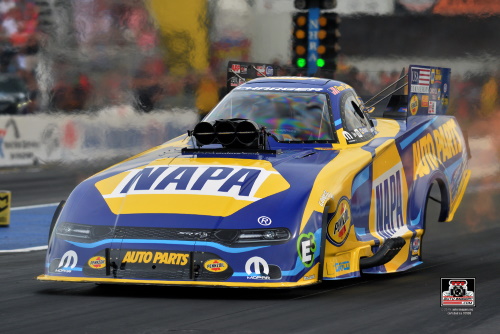 Race Recap:
Ron Capps raced to victory for the first time in his Funny Car career while competing at World Wide Technology Raceway in suburban St. Louis in 1997. Since that time, the driver of the NAPA AUTO PARTS Dodge Hellcat has gone on to win the 2016 Funny Car world championship and three more St. Louis Wally trophies to add to his total of 64 wins.

After earning a qualifying position in the top half of the field, Capps looked prime for a long day of going rounds on Sunday. He drew No. 12 qualifier Blake Alexander in round one, and the two drivers were neck-and-neck until just before the finish line when Capps pulled ahead to take the win with his 3.966-second pass versus Alexander’s 3.997-second losing effort. The victory marked Capps’ 30th round win of the season and set up a quarterfinal battle with fellow Countdown contender and former world champion, Robert Hight. In the quarterfinals, the pair of veteran drivers were nearly even until just before half-track when Capps hazed the tires, and Hight was able to drive away with the win.

Quotable:
“We really had to earn our qualifying position this weekend. We had a few issues early on, but this NAPA AutoCare team was able to bounce back and qualify fifth. The interesting thing about this race was how many big-time Countdown match-ups there were early in the day. It’s going to be like that from here on out; this is playoff racing right now, and everyone is on high alert. You can feel the energy in the staging lanes. It’s everything you’ve worked at all year long.

“We went out and ran great against Blake Alexander in the first round, and then faced Robert Hight and (crew chief) Jimmy Prock in round two. That’s one of those ‘down to the finals at the last race of the season’ kind of match-ups. They’re a team we always get up for. We were out in front of Robert, but the car just pulled the tires loose at about 400-feet. We just didn’t take enough power out of it. But, that’s part of it; our NAPA AUTO PARTS Dodge Hellcat is a thoroughbred that wants to run, and we’re just trying to corral it a little bit. But, we’ve got a heck of a hot rod, so I’m excited about these next couple of races.” 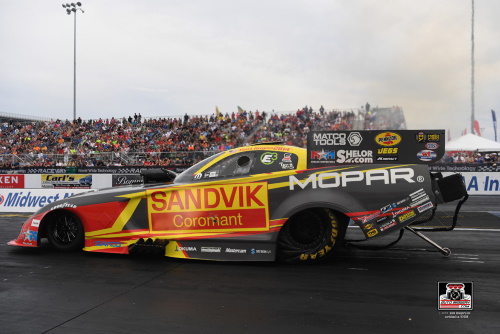 Race Recap:
After making three strong qualifying runs, including posting low E.T. of Q3, two-time Funny Car world champion Matt Hagan earned the No. 2 qualifying position, and was poised to make a deep run through eliminations on Sunday. First up for the driver of the DSM Precision Machining Dodge Charger SRT Hellcat Widebody was a round one meeting with Jim Campbell. Hagan powered by Campbell’s initial lead, and was looking good until his machine lost traction nearing the 330-foot mark. Campbell encountered issues further down track, but his momentum enabled him to coast across the finish line first.

Quotable:
“First round losses are always devastating. There are a lot of good cars out here in this class right now, and we just have to get our stuff together and do better. This team is better than that and we are better than what we showed here today in St. Louis. We showed how good we were in qualifying, grabbing that No. 2 spot. What happened today was unexpected. I was glad it recovered and we pedaled it to the finish, but it just wasn’t enough. It’s unfortunate. I apologize to our sponsors. I apologize to our fans. That’s just not the results we are accustomed to putting up. It’s crunch time. We have to do better. It’s just that simple.” 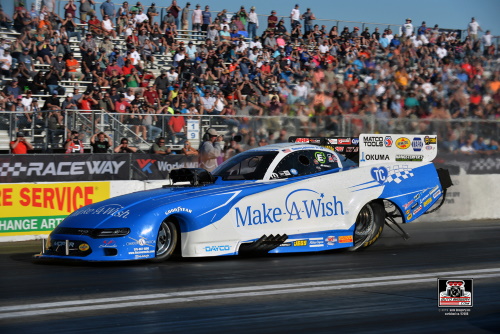 Race Recap:
Tommy Johnson Jr. and the Make-A-Wish Foundation team have been solid throughout the majority of the 2019 season. They have captured two event wins, two runner-up’s and six semifinal finishes throughout the first 17 races, but were looking to the Midwest Nationals to help right the ship after two consecutive first-round losses at the previous events.

Johnson began his campaign for a first St. Louis trophy by qualifying in the top half of the field on the strength of his 3.889-second Q4 run to draw fellow Countdown contender Shawn Langdon in round one. Johnson powered his machine to the quickest E.T. of the session (3.898 seconds), but Langdon’s quicker reaction time caused Johnson to suffer a rare holeshot loss.

Quotable:
“These first two races of the Countdown have not gone the way we had hoped. The car had been off a little bit, and then we got the car back and then, I’m off, so we’ve all got to get on the same page and get the job done. It’s just frustrating, you never want to lose that way, but we have a strong race car again, so we’ll go back and see if we can’t finish out the year strong.” 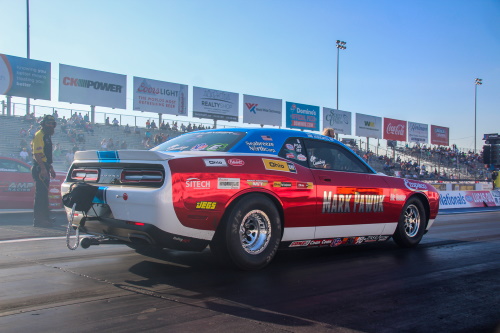 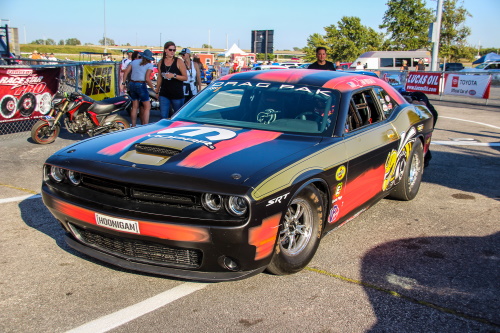