Qualified in the No. 3 spot, Line had lane choice for his first-round meeting with Steve Graham. It proved inconsequential, however, when his opponent illuminated the red light by leaving .021-second too soon. Line raced ahead for a 6.592-second win at 209.14 mph that was top speed of the round.

Line was first to launch in the second act, but Matt Hartford got the win after the Summit Racing Chevy’s tires broke loose from the track and his car pulled hard to the left. The car sashayed, but Line kept it in his lane and slowed to a 9.100 to Hartford’s 6.644. 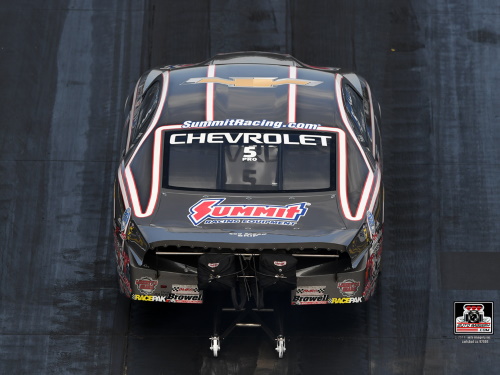 “We didn’t have the outcome we hoped for today with the KB Racing Pro Stock cars, but even though today didn’t go as planned, I’m excited to get to Charlotte. My silver Summit Racing Chevy Camaro is still really good, and hopefully we didn’t lose too much momentum. I’m also very happy for (KB Racing-powered) Dave Kramer to win the Factory Stock Showdown today. He’s a good fella, and that was super cool. It was fun to watch, and he worked hard for the win.”

Greg Anderson came into Sunday with confidence in his racecar after struggling through the last handful of events. The driver of the red Summit Racing Chevrolet Camaro powered to the fastest speed of qualifying and locked into the No. 4 position, and he brought the same power and speed to the table on Sunday for eliminations.

“We made a step forward in qualifying, but then today we took another step back, so it’s frustrating,” said Anderson, who is up from eighth to No. 7 in the Pro Stock standings. “Sunday has been my Achilles heel, and we did everything we thought we needed to do to get past this problem, but we just haven’t yet been able to get hold of it. It was good to see the improvements in qualifying, yes, but we have to get Sunday right, or what you did in qualifying really doesn’t matter. We have four races left this year, and we’re going to do everything we can to get this car back in the winner’s circle.”

“We probably had an above average day compared to what we’ve had recently,” said Butner. “We went some rounds, and our Jim Butner Auto Group Chevrolet Camaro was definitely a car we could turn win lights on with. A lot of us struggle right now with a hot racetrack, some people get it, and some don’t, but I think the rest of the Countdown is going to be tough. It’s going to be close. I don’t see a breakaway person this year – you just hope for the best.

“It’s too early to watch the points, but I will tell you that you cannot lose round one. If you lose round one right now, unless a miracle would happen, you’re just going to be a top 10 guy. I think there are going to be five or six people with really a legit shot at the Championship. Let’s just hope it’s one of us in the end.”

“This is the fourth motor in three races,” said Butner. “We have some issues, and we really don’t know what they are yet. It had power in the last qualifying run, but something was hurt. It might have been hurt before that. We checked everything, and it was good – we thought – but it is the same issue we’ve fought the last three races. It’s been since the rule change for some reason, but I don’t understand that. We’re kind of stumped, but we’ll figure it out.”

The remaining race will take place in Dallas at the NHRA FallNationals in October, and Butner would like to make the event but wants to make sure everything is right.

“It depends on if we find the issue,” he said. “We have another motor, but we don’t want to put it in if there is an issue. So, we’ll go test before Dallas, put some more sensors in different places, and see if we can find what’s going wrong. Our goal is to be at Dallas – and I can’t sit out and not run – but I have to think smart. I’m sure Drew [Skillman] is going to win the championship, and I congratulate him and am happy. Whether we finish second or 10th really doesn’t matter to me. I just want to be geared up for next year and be prepared.”

The next event on the 2019 Mello Yello Drag Racing Series tour is race three of six in the Countdown to the Championship, the NHRA Carolina Nationals at zMAX Dragway in Charlotte, October 11-13.