ST. LOUIS, Mo. (September 30, 2019) – Terry McMillen and his AMALIEⓇ Motor Oil XTERMIGATORⓇ team fought through adversity to claim an elusive round win in the first round of eliminations. The win marks the team’s first round win since Epping, New Hampshire earlier this summer.

“We had a good weekend,” McMillen explained. “I should clarify. It was a good weekend on the track and a tough weekend in the pits.”

The team lost the generator that powers the pits in between qualifying rounds, which in turn damaged the air compressor as well. While McMillen scrambled to rent a generator, the team continued to hustle on the service of the car.

“It was all we could do to get back up there for the fourth session,” McMillen said. “It just goes to show how much this team has come together.” McMillen would post a 3.727 elapsed time at 329.10 MPH in that session. That run moved him to the ninth qualifying spot and a first round match-up with Clay Millican.

“It’s hard to believe that Top Fuel has come to this,” McMillen continued. “You go out and run a 3.72 in qualifying and don’t have lane choice.” 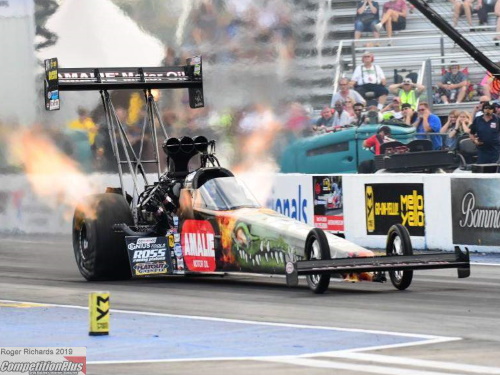 “I would rather face Clay in a final round,” McMillen said. “Hopefully we get an opportunity to do that someday. Right now my thoughts and prayers are with his family. He lost his mother Saturday.”

McMillen will be on the track again October 11-13 in Charlotte at the NHRA North Carolina Nationals.