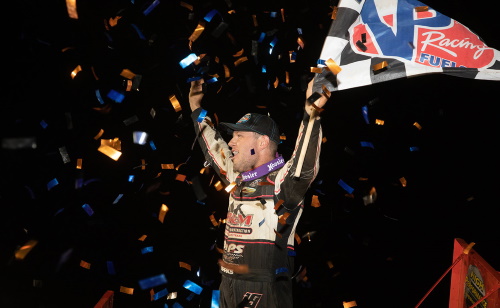 “Do you want to read what that says?” he asked the Myerstown, Pa. driver. 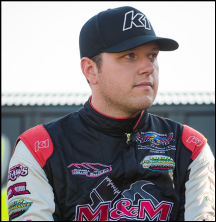 How did he feel after Ellis proclaimed him the 2019 victor?

“I have no idea,” Marks said with a smile. “This is amazing. I’ve been wanting to win this race for a very long time. I grew up here in the infield. This is where I fell in love with Sprint Car racing. This is awesome.”

Marks described his 2019 season as frustrating. He failed to make four Features throughout the year and has said he felt like he let four potential wins slip through his fingers. Not Saturday night. Not in his home state in front of friends, family and local fans.

He showcased his determination for atonement during the final Drydene Heat race of the night. He went from fourth to second in one lap on a restart and put himself in the DIRTVision Fast Pass Dash.

He then drew the pole for the second Dash of the night and went on to win it – placing him on the outside pole for the 40-lap World of Outlaws NOS Energy Drink Sprint Car Series Feature.

At the start of the National Open, Marks and polesitter Brian Brown drag raced down the front stretch toward turn one. Brown launched ahead of Marks into the corner to hold the lead, but before the two drivers could continue their duel down the backstretch a caution came out.

When it came time to stomp the throttle again, Marks acted quicker than Brown. He rocketed ahead of the FVP/Casey’s General Stores No. 21 and claimed the lead before the first turn. He led two laps before yellow lights flashed around the speed, again.

Marks chose the inside line on the restart and found himself in the same situation Brown did two laps earlier. Brown got the jump on Marks off turn four and charged ahead of him to reclaim the lead. He then began to extend his lead over Marks every lap.

On Lap nine, Brown lost traction in turn one and fought to keep his car pointed straight off turn two. His slip allowed Marks to reel him in. Daryn Pittman, in third, was also closing in on them both.

Three laps later Marks carried the momentum of a strong run off turn four to catch Brown before turn one. When they entered the turn, Marks dove underneath Brown and cleared him for the lead. Brown then lost second to Pittman the next corner.

Marks’ lead was short lived again with the caution coming out on Lap 14. After losing the lead to Brown on the last restart by starting on the bottom, Marks chose the high side for his next attempt. However, it didn’t help. Pittman bested him on the start and took the lead down the front stretch.

However, before the lap was completed a caution came out for several cars getting together in turn three – including 2018 National Open winner Lance Dewease, who could not continue. The race was then put under an Open Red, allowing teams to fuel their cars.

Marks was ready for Pittman on the restart. He rocketed ahead of the field, pulling away by half of a second when he reached the backstretch.

While Marks pulled away with the lead, Brown, Donny Schatz and Aaron Reutzel brawled for third. The trio used up the entire track for several laps trying to pass each other. Eventually Schatz and Reutzel made their way by Brown to move into third and fourth, respectively.

Heavy lap traffic became an issue for Marks by the halfway point of the Feature. Pittman closed in. And Schatz and Reutzel closed in on Pittman. A blanket could have covered the top-four with 20 laps to go.

Flashbacks of being held up in lap traffic and losing the win at Nashville Fairgrounds Speedway in June projected in Marks’ head. However, that wasn’t going to be the case this time. He learned. He wasn’t going to let another win slip away.

“I tried to play that whole race as smart as I could,” Marks said. “Tried to drive like a veteran and not get over my head. Just be super patient. Because I lost that race earlier in the year at Nashville. Kind of the same situation, you know running the bottom there with lap cars and I felt like I needed to get by them, made a mistake and lost the lead. I made sure I didn’t want to do that tonight.”

His patience with lap cars turned into car lengths gained on Pittman. Pressure from behind faded as the final laps approached. Marks was on his way to his fourth career World of Outlaws win. 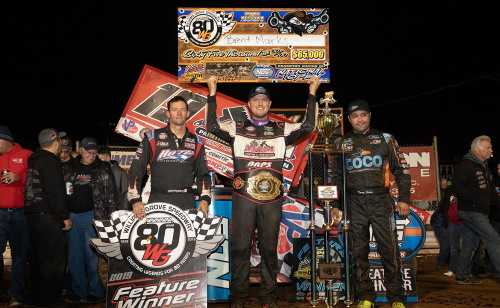 Then, a caution. Paul McMahan came to a stop in turn one with a flat tire. Marks had to make two more perfect laps before he could see the checkered flag.

Pittman tried to get a run around the high side of turns one and two, but Marks was too strong on the bottom. By the time the Pennsylvanian finally saw the checkered flag, he had a 1.4 second lead over Pittman. Schatz finished third for the second night in-a-row at the speedway.

The runner-up finish for Pittman was his fifth time finishing second at the National Open. He said he would trade just about any of his win for a National Open win. He thought he might win before the caution came out when he took the lead on the restart. However, he was still pleased with his team’s overall performance – finishing second after starting sixth.

“We had a really good Roth Motorsports car for the weekend,” Pittman said. “We kept fine tuning on it, didn’t make any wholesale changes and continued to get better and better.”

For the second night in-a-row Schatz took a big chunk out of Brad Sweet’s points lead over him – with Sweet finishing ninth. Schatz is now 14 points behind Sweet. David Gravel, who finished fifth, has also crept his way into the points battle, now 88 points behind Sweet with eight races to go.

Marks was the biggest winner in several ways. He celebrated the biggest win in his World Outlaws career, so far, with his family, friends and local fans and earned a large payday for his self-owned Brent Marks Racing team.

“What does it pay, sixty-five (thousand)?” Marks asked Ellis in Victory Lane.

“That means everything,” Marks said after the race. “That sure as hell gets us through the winter.”

The World of Outlaws NOS Energy Drink Sprint Car Series on Saturday, Oct. 12, will be at Terre Haute Action Track in Terre Haute, Ind. for the Wabash Clash. Get tickets and more information.