CONCORD, N.C. (October 9, 2019) – Rookie of the Year nominee, Austin Prock and the Montana Brand / Rocky Mountain Twist team are headed to the third of six playoff events in the NHRA Mello Yello Countdown to the Championship, the NTK NHRA Carolina Nationals, eager to continue their streak of consistent performance.

The first-year standout is making his way to the midway point of the Countdown sitting eighth in the points standings, only 79 points out of first. With an impressive rookie season that includes one win, four semifinal appearances and a handful of competitive passes including a career best elapsed time of 3.697-seconds and top speed of 334.15 mph, the young driver is showing no signs of backing down.

During qualifying at the recent AAA Insurance NHRA Midwest Nationals, Prock lit up the scoreboard with four stellar passes, a 3.808, 3.726, 3.707 and 3.712, to land his Mike Green and Ronnie Thompson tuned hot rod in the No. 3 spot for the second time of the season. He went on to take a first-round win on race day powering to a .74 but faced trouble in the quarterfinal when he dropped a cylinder on track.

“We had the best car we’ve had all year in St. Louis, probably our best performance all year. We were seventh going in and left back in the No. 8 spot but I think things are only going to go up from here with this team,” said Prock. “If we can keep up that momentum and not make any mistakes, I think we can get this thing back in the winner’s circle and really contend for this championship. Charlotte, here we come.”

Prock, a third-generation drag racer, enters this year’s event at zMAX Dragway competing to be the third John Force Racing driver to make it into the winner’s circle at the fall event and first JFR rookie to take home the Wally in the nitro categories at the facility. At the spring four-wide event, Prock raced down the fan-favorite track for the first time in his career.

“I’m ready to get back after it. These off weekends are tough to deal with when you’re in the thick of things in this Countdown, so we’re all ready to get to Charlotte and get this next one going,” said Prock. “It’s been a great year for the Montana Brand / Rocky Mountain Twist team. We’ve proven ourselves each weekend and I think this weekend in Charlotte will be exciting for the fans.” 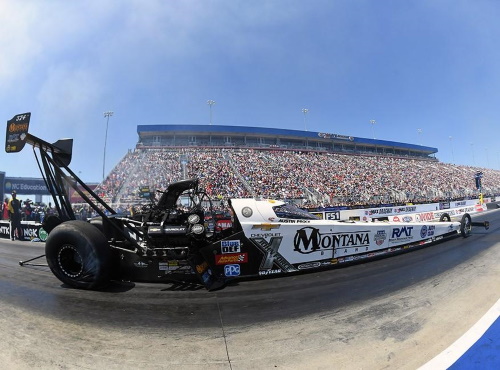