Jack Beckman No. 1 on Friday at Charlotte 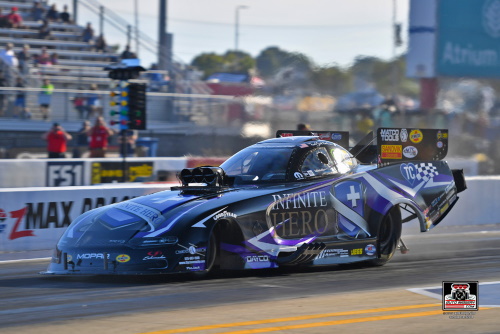 CONCORD, N.C. (October 11, 2019) – Jack Beckman flew into Charlotte with one goal in mind – pick up as many points as possible and reclaim the Funny Car point lead he enjoyed after winning the first race of the NHRA Countdown to the Championship in Reading, Pa. last month. Beckman entered the NTK NHRA Carolina Nationals sitting 24 points behind current point leader Robert Hight, and after rocketing to the provisional No. 1 spot during day one of qualifying, he is one step closer to accomplishing that goal.

Under the zMAX Dragway lights, Beckman laid down an impressive Q2 blast of 3.873 seconds at 334.07 mph to snag the provisional No. 1 spot behind the wheel of the Infinite Hero Foundation Dodge Charger SRT Hellcat Funny Car. The run allowed him to bank three valuable bonus points and put the Dean Antonelli/John Medlen-led Infinite Hero team in position to throw down and race for more qualifying bonus points on Saturday.

“There are ten cars capable of winning the Funny Car championship,” explained Beckman, the 2012 NHRA Funny Car world champion. “I don’t see anyone running away with (the championship) right now, so it’s probably going to come down to those three, four, five points at the season-finale in Pomona.

“There are six more bonus points up for grabs tomorrow. I think we need to try our best to get at least four of them. They’re just tie-breaker points during the regular season, but we could be in a position where they might decide the championship at the end of the season. I won the 2012 championship by two points. In fact, the year that I won by those two points, Friday at Pomona, we were low E.T., and that gave us three points. That one run literally won us the championship. Every single run from here on out is immensely important.”

Beckman is a 25-time No. 1 qualifier and will be going for his first zMAX Dragway pole when qualifying resumes on Saturday.