CONCORD, N.C. (October 12, 2019) – Brittany Force and the Advance Auto Parts Top Fuel dragster team propelled themselves up six spots to secure the No. 3 qualifying position Saturday at the NTK NHRA Carolina Nationals at zMAX Dragway. In Funny Car, Robert Hight locked in the No. 2 qualifier with his Automobile Club of Southern California Chevrolet Camaro SS and John Force with the PEAK Coolant and Motor Oil / BlueDEF Chevy team will enter eliminations in fifth. Rookie teammate Austin Prock and the Montana Brand / Rocky Mountain Twist team improved their performance and will start race day from the No. 13 spot. 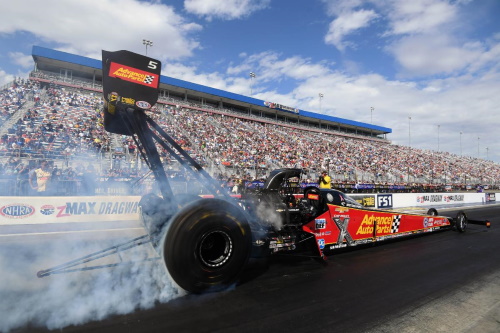 Beginning day two of qualifying in the No. 9 spot, Brittany Force and the Advance Auto Parts team made drastic improvement in the third qualifying round running a stellar 3.738-second pass at 328.14 mph. In addition to temporarily putting Force in the No. 2 spot, the pass was also quickest of the session and earned her three bonus points.

Force, who is looking for her first win at the Carolina Nationals and second at zMAX Dragway, continued the momentum in her final qualifying pass with a 3.730-second pass at 321.04 mph to be third quickest of the group for an additional bonus point and to earn the No. 3 spot heading into race day where she’ll compete against Smax Smith in the first round of eliminations.

“Overall a great day. We had big improvements for this Advance Auto Parts team looking at what we did yesterday. We struggled a little bit on Friday but we got back on top and figured this car out for race day tomorrow,” said Force. “We made two solid runs, both .73s, in qualifying today and it moved us way up in the field, all the way up to the No. 3 spot. I looked at the ladder for tomorrow and we have a good ladder. We have to go rounds tomorrow; we still have our eye on that championship. I put all my faith in this Advance Auto Parts team that we are going to do pretty well and go some rounds on race day.” 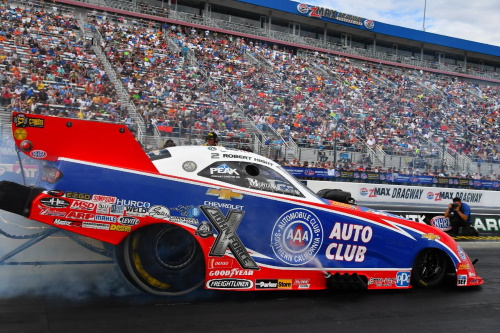 Competing for his sixth win of the season and fourth at the Carolina Nationals, Robert Hight and the Auto Club Chevy Camaro team will start race day at zMAX Dragway from the No. 2 spot after their 3.878-second pass at 334.07 mph Friday night.

In his first pass Saturday, Hight handled his Jimmy Prock and Chris Cunningham tuned Chevy Camaro to a 3.900-second pass at 332.10 mph to be quickest of the session, pick up three bonus points and hold onto the No. 2 spot. He continued to impress in the final qualifying round with a 3.913 pass at 330.96 and maintained his positioning. The two-time Funny Car world champion will face Mike McIntire Jr. in the first round on race day.

“Being the No. 2 qualifier, that’s not a bad place to be. We picked up some of those important bonus points and we’re ready to go some rounds tomorrow. Jimmy Prock and Chris Cunningham, they had this Auto Club Chevy running consistent so I’m excited to see what happens tomorrow,” said Hight who is the winningest Funny Car driver at zMAX Dragway. “Not sure the weather is going to be on our side but in those cooler conditions I think we’ll be able to put some competitive numbers up and hopefully go some rounds and earn that Wally. It’s been awhile since this Auto Club Chevy has been to the winner’s circle.” 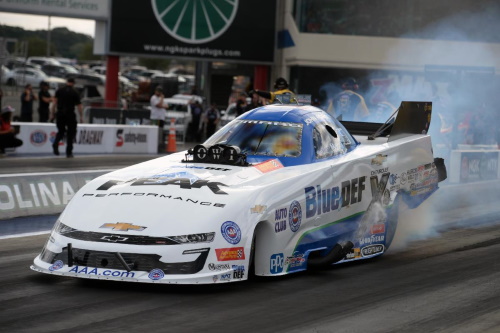 Racing legend, John Force and the PEAK Coolant and Motor Oil / BlueDEF Chevy Camaro team will head into race day from the No. 5 position after laying down a solid 3.890-second pass at 331.45 mph from Friday night. In Saturday’s first session, Force lost traction to run his hot rod to 4.576-seconds at 181.25 mph but stayed No. 4. He improved in his last pass making a 3.896-second pass at 328.06 mph but would move one spot into fifth. The sixteen-time Funny Car world champ is paired with reigning world champion J.R. Todd in round one Sunday.

“Third race into the Countdown and we’re all in there. I said to media on Friday that you have to be like Pac-Man and get all the little points. I didn’t get all of them in qualifying but I got a few and that’s going to help. Now we have to go some rounds tomorrow, keep Robert close,” said Force who is 5-4 against Todd, 3-1 this season. “My team, Brian Corradi and Danny Hood and all these young guys, and myself, we have to make sure we get this PEAK BlueDEF Chevy down that track, keep it fast. They’ll do their job and I’ll do mine and we’ll see how it goes.” 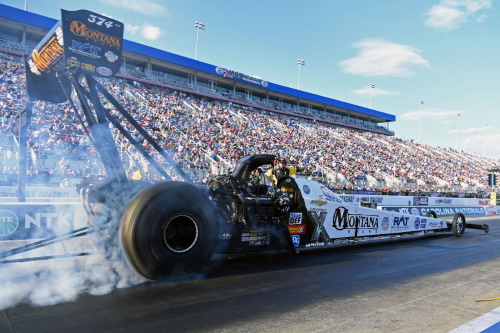 After a less than ideal first day of qualifying, third-generation racer Austin Prock improved his performance through the final two qualifying sessions on Saturday. In his first pass of the day, Prock powered his Montana Brand / Rocky Mountain Twist hot rod to a 3.948-second pass at 312.35 mph before putting up a clean 3.850 at 316.15 mph. It was his best pass of the weekend and moved him up one spot into 13th. The Rookie of the Year candidate is paired up with Richie Crampton in round one of eliminations.

“Tough weekend so far for this Montana Brand / Rocky Mountain Twist team. Qualified in the bottom half of the field but conditions are going to be completely different tomorrow compared to what we’ve seen so far,” said Prock. “We have set ourselves up to run Countdown competitors in the early rounds of eliminations, so tomorrow will be a good day to make a points move. I’m excited to get going.”

Eliminations at the NTK NHRA Carolina Nationals were changed from a noon start time to 11 a.m. due to impending weather on the radar at zMAX Dragway just outside of Charlotte, N.C. Fans can still catch the television coverage of all the action on FOX Sports 1 (FS1) at 2 p.m. ET.