ENNIS, Texas (October 19, 2019) – Under the Friday night lights at the AAA Texas NHRA FallNationals at Texas Motorplex, John Force and Brittany Force both powered their 11,000-horsepower machines to the provisional No. 1 qualifier spots in their respective categories for the second time this season. Teammate Robert Hight and his AAA Texas Chevrolet Camaro SS team are currently in the No. 2 spot, and rookie Austin Prock with his Montana Brand / Rocky Mountain Twist dragster are 11th. 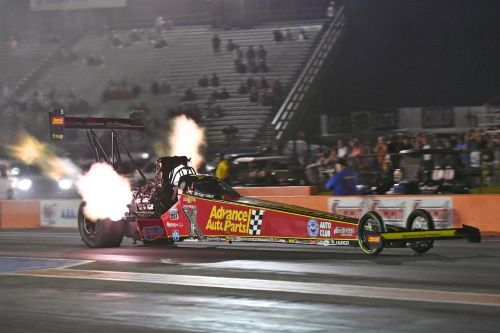 Looking for her eighth No. 1 qualifier of the season and first at the Motorplex, Brittany Force propelled her Advance Auto Parts dragster to a jaw dropping 3.651-second pass at 331.28 mph in the night session to set the track elapsed time record and jump into the No. 1 position. The 2017 Top Fuel world champion had an already solid start to qualifying when she crossed the finish line with a clean 3.784-second pass at 299.00 mph as her first pass of the day.

“That was an awesome run for this Advance Auto Parts team. David Grubnic is known for going out Friday night and hitting that No. 1 spot. We did it, he told me we were going to do it, he was confident when we rolled up. He told me we’re going to roll up there and steal that No. 1 spot so hang on,” Force explained. “That run was very important, earned us three bonus points. We’re chasing that points lead and it’s not out of our reach. Tomorrow is going to be really important for race day. What we are looking at, more than a No. 1 qualifier, is winning on race day. That will start tomorrow, how we run tomorrow, if we get two consistent runs going into race day, we should be set up pretty good.” 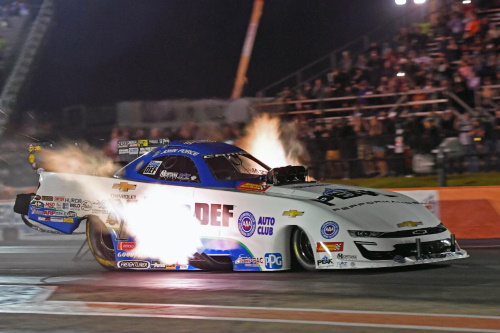 Continuing the pursuit of an unprecedented 17th Funny Car world championship title, driving legend John Force took his PEAK Coolant and Motor Oil / BlueDEF Chevrolet Camaro SS to a stellar 3.879-second pass at 333.16 mph in the first session to be quickest of the group. With header flames lit in the evening session, Force kept the momentum powering his way to a 3.834-second pass at 337.33 mph for a career best speed and to hold onto the No. 1 spot.

“Well, I’m driving the BlueDEF Chevrolet Camaro with Old World Industries this weekend and it’s a fast car. Brian Corradi, Danny Hood, my son-in-law, and Tim Fabrisi, I call them Corradi’s Kids, they’re really good and they’ve been stranded with me, but I had said to Corradi this morning that we have three to go and we can’t just go up there and just put her in the show, we’ve got to do more than that,” said Force who picked up six bonus points from both qualifying sessions. “Then, this afternoon, we went out there and ran an .87 and then Robert ran an .85 in that last one with AAA Texas and I thought that was that. I didn’t know if it would do it again but we stepped it up. This PEAK BlueDEF team has given me a great race car so I’m excited about that and we got the low qualifier, that’s more than just getting in the show.” 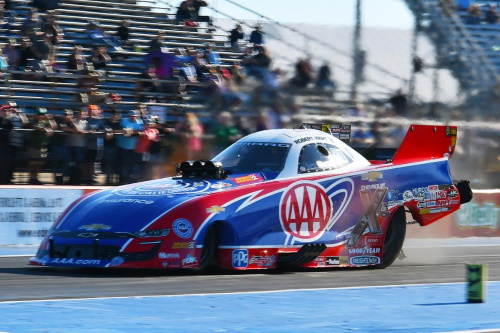 Coming off a win at Monday’s Carolina Nationals, defending event winner Robert Hight ran his AAA Texas Chevy Camaro SS to a 3.979-second pass at 271.73 mph. In his second qualifying pass, the two-time Funny Car world champion handled his hot rod to a stout 3.851-seconds at 335.07 mph to be second quickest of the session and pick up two bonus points. Hight has been the No. 1 qualifier at the Texas Motorplex six times and is chasing his third consecutive victory at the facility.

“We had a good race car today. In that last session we ran an .85 and were sitting in that No. 1 spot. I really thought we had it but then, you know, the boss came in and took it back. If anyone’s going to fight us for that top spot, it might as well be him,” said Hight. “Tomorrow, conditions are going to be a lot different, a lot warmer but Jimmy Prock and Chris Cunningham, these AAA Texas guys, they’re not backing down. They want this so bad and we’re chasing that championship so I’m confident we’ll have another good day tomorrow.” 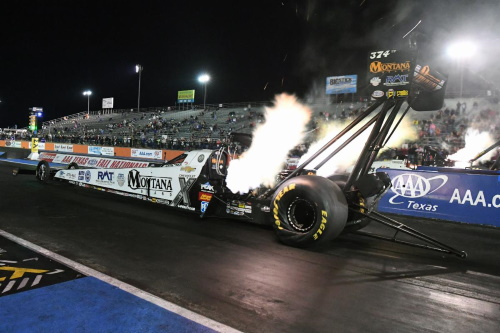 Rookie of the Year candidate Austin Prock started qualifying at Texas Motorplex on a strong note when he piloted his Montana Brand / Rocky Mountain Twist dragster to a clean 3.779-second pass at 324.12 mph. The third-generation racer improved in the second session but was off from expectations when he ran 3.739-seconds at 328.54 mph bumping him into 11th.

“Started out the day pretty nice, made a nice, clean, smooth pass in this Montana Brand / Rocky Mountain Twist dragster and just missed it tonight,” Prock said. “Had a tough break, in the bottom half of the field again and it’s going to be tough to move up tomorrow with as hot as the conditions are going to be but I guess we’re just going to have to be a spoiler again on Sunday.”