KANSAS CITY, KS (October 19, 2019) – When Ford wanted to win Le Mans against the unstoppable Ferrari team it turned to legendary car designer Carroll Shelby, his team and his ace driver Ken Miles to get the job done.

A similar mentality was used when Ford wanted to return to Sprint Car racing with a new 410 engine, after a more than 20-year absence in the sport. It turned to NASCAR champion Tony Stewart, his team and his ace driver Donny Schatz. 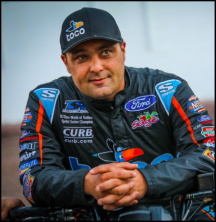 Friday night at Lakeside Speedway, for the FVP Platinum Battery Showdown, Schatz brought a Ford powered World of Outlaws Sprint Car back to Victory Lane for the first time since August 26, 1998 when Jeff Swindell won at Southern Oregon Speedway.

It was the new Ford FPS 410 engine’s third appearance in the World of Outlaws NOS Energy Drink Sprint Car Series – Schatz finished on the podium in his first two races with it.

“It’s pretty rewarding,” said Schatz about winning with the new Ford engine. “Sometimes you have to do things in life that are off the beaten path. That’s what this whole program is. They got a lot of dedication to it. Tony (Stewart) does. And what Tony asks us to do we do. Here we are.

“Rick (Warner, Schatz’s former crew chief who helped develop the FPS 410) has put a lot of time and blood and sweat and countless sleepless nights on it and to bring it out and to have two podiums at Williams Grove and a win tonight is huge… It’s going to be a live and learn experience. Tonight, it was a live on it. The next night we might be learning. But they did a great job and that’s what we’re here to do, have fun and win races with it.”

Schatz and his Tony Stewart/Curb-Agajanian Racing had to fight for the win all night. He finished second in his Drydene Heat race to Logan Schuchart, who was about half of a second faster than everyone else. Schatz then finished fifth in the DIRTVision Fast Pass Dash and had to change a motor after.

The motor wasn’t at fault for the change, Schatz said. It wasn’t sealed properly and leaked oil.

With a new FPS 410 installed for the Feature, Schatz put its full potential on display throughout the 30 laps.

The beginning of the race was plagued with multiple cautions for accidents and poor restarts. Brian Brown, in the FVP No. 21 car, led the field through it all. Daryn Pittman, David Gravel, Logan Schuchart, Brad Sweet and Donny Schatz battled amongst themselves for position in the short runs between cautions.

Schatz made his way from fifth to second by Lap 10.

A reg flag for Matt Juhl flipping on Lap 12 brought out an Open Red, allowing teams to fuel their cars and make adjustments.

When the Feature when back green Schatz didn’t waste time testing the limits of his new engine to pass Brown for the lead.

Brown hung on to the high side of the track through turns one and two, while Schatz searched for grip low. What he found allowed him to hammer the throttle and exit the corner side-by-side with Brown.

They drag raced down the backstretch and remained in line through turns three and four. However, Brown couldn’t match the lightspeed launch Schatz got off turn four. The Toco Warranty No. 15 shot to the lead on Lap 13.

Brown, of Grain Valley, Mo., was hungry for another hometown win, though. Continuing to favor the top line, he built momentum off turn two and charged to the outside of Schatz down the backstretch. They again raced side-by-side through turns three and four, but the FPS 410 continued to conjure remarkable speed off the corner.

Schatz took the lead and ran away with it. He found himself more than a second ahead of Brown a few laps after passing him.

Schuchart eventually charged his way to second by Lap 20 and Sweet moved into third by Lap 27. Time was running out to catch Schatz, though. Lap traffic became a factor in the closing laps, but before either driver could try to use it to their advantage a caution came out for Ian Madsen slowing in turn four.

When the green flag flew again, Schatz was gone. The 10-time Series champion sprinted away from the field and had almost a second lead over Schuchart when he crossed the finish line.

“I would’ve liked to see what would have happened if we kept going or had some lap traffic,” Schuchart said. “This is a great team. An awesome year. We would’ve liked to have gotten the win… But still a great night.”

Sweet’s third-place finish allowed Schatz to chip away at his points lead. The Fargo, N.D. driver is now 24 points behind Sweet, of Grass Valley, Calif., with five races left this season – three before the World Finals in November.

“We’re happy with a podium run,” Sweet said. “We were just a little bit off and fighting a few things. We’ll take a podium with the NAPA Auto Parts car and move on to tomorrow night.”

Schatz’s victory was his 10th of the year – 293rd career Series win – and first win in almost a month.

“These guys, it’s incredible what they do,” Schatz said about his team. “The race car was awesome. Yeah, we got to make changes to it for the extra power and a little bit extra weight, but they do an awesome job. It’s great to finally get a win again.”

The World of Outlaws NOS Energy Drink Sprint Car Series on Oct. 19 will return to Lake Ozark Speedway in Eldon, Mo. for the Jason Johnson Classic. Get tickets and more information. 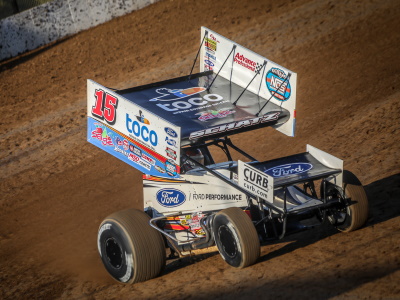