ENNIS, Texas (October 19, 2019) – For the second time in NHRA history a parent child duo qualified No. 1 together. John Force and Brittany Force secured the No. 1 qualifier spot in their respective nitro categories Saturday at the AAA Texas NHRA FallNationals at Texas Motorplex. The first time the feat was accomplished, the Force pair qualified in the top spot together at this year’s SpringNationals in Houston, Texas. Austin Prock and the Montana Brand / Rocky Mountain Twist team improved to start race day from the No. 7 spot, while Robert Hight and his AAA Texas Chevy Camaro SS team held onto the No. 2 qualifier position.

“Going No. 1 alongside Brittany makes it really special, anytime you get to do something with your kids and to be part of how proud she is of what her and her team have accomplished, it’s good,” said Force. “My wife loves it and it’ll make for a good evening.” 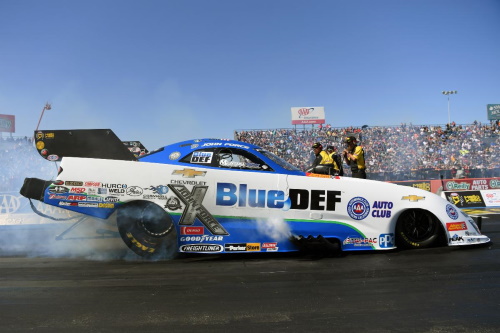 “It’s always really special to hold onto any No. 1 qualifier with a teammate but to hold it with my dad, that’s the best. He’s the one who taught me how to drive this car and everything about this sport, and the reason I’m out here is because of him so to be able to share the No. 1 qualifier with him is awesome,” Force said. “We did it earlier this season and now we’re doing it again. It’s just very special to me. I’ve doubled up with Robert a handful of times but to be able to double-up with my dad would be awesome. It’s on my bucket list.”

For the fifth time this season, ninth at the Texas Motorplex and 160th time of his career, racing icon John Force will start race day from the No. 1 qualifying spot. The 16-time Funny Car world champion clinched his positioning under the Friday night lights when he piloted his PEAK Coolant and Motor Oil / BlueDEF Chevy Camaro SS to an impressive 3.834-second pass at 337.33 mph. Force, who has won from the No. 1 spot 60 times, will be chasing his seventh win at the facility, five of which have previously come from the No. 1 spot.

Force held onto his No. 1 positioning through the final two qualifying sessions on Saturday. He started the day with a 4.317-second pass at 211.00 mph after shaking the tires down track, then, in the final qualifying round, ran his PEAK BlueDEF Chevy to a clean 3.937-seconds at 325.77 mph.

“Friday was prime conditions, we ran good in the afternoon, 3.87-seconds and then came back and ran 3.83, but those were prime conditions. We didn’t think anybody would top us, Brittany or I, today. We were trying to get down the race track. We pushed it hard, smoked the tires on the first run but we came back and ran 3.93 and that’s good enough to race tomorrow,” said Force who will face Jeff Arend with whom he is 17-5 against. “I love seeing the crowd. It’s what we thrive on. Seeing the people being in the stands and cheering us on. Our egos really get in there but every driver is like that. I look forward to tomorrow.” 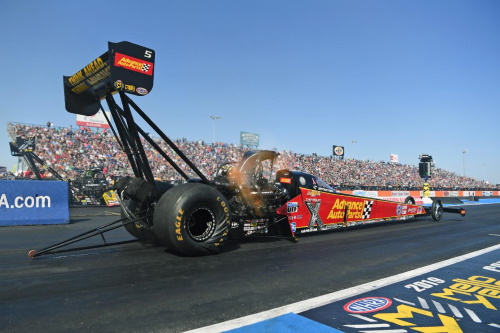 Brittany Force, who set the track elapsed time record and picked up her first No. 1 qualifier at the Texas Motorplex off the efforts of an exhilarating 3.651-second pass at 331.28 mph Friday night, is competing for her second win at the facility and second of the season.

The David Grubnic and Mac Savage tuned Advance Auto Parts dragster started day two of qualifying with a 4.290-second pass at 190.89 mph after losing traction and clicking off early but came back in the final session to make a monster run of 3.691-seconds at 314.02 mph to be quickest of the group and earn another three valuable bonus points. The 2017 Top Fuel world champion will start race day matched up with Cameron Ferre.

“To be No. 1, it’s important. We want every single point we can grab. Where we really need to perform well though, is on race day. We haven’t won since the beginning of the season and we’ve been to the semis but that’s not good enough. We need to win this thing. We need to go out tomorrow, stay consistent and get our car down there,” Force said. “This Advance Auto Parts team, we’re a really tight knit group. I love every single one of those guys and I give it up to them. It’s a team effort and we’re all No. 1 together tonight.” 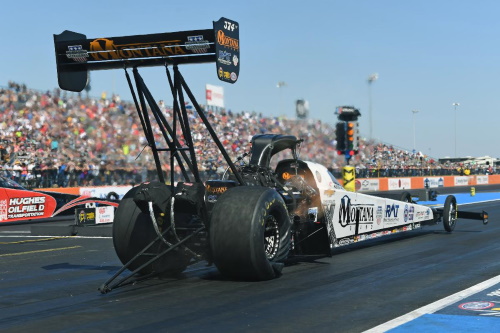 Entering day two of qualifying in the No. 11 spot, Austin Prock and the Montana Brand / Rocky Mountain Twist dragster turned things around in the final session when they propelled their 11,000-horsepower machine to a stout 3.714-second pass at 328.38 mph. It was the third quickest of the group, earned him one bonus points and moved him up the ladder four spots to start race day from seventh. The much-needed improvement came after Prock crossed the finish line at 3.794-seconds and 322.11 mph in his first pass of the day.

“After a rough start yesterday, we ended qualifying great tonight. Ran a 3.714-second pass in the heat of the day. This Montana Brand / Rocky Mountain Twist team is stoked for tomorrow morning,” said Prock. “We have a big matchup with No. 2 in points Doug Kalitta so hopefully we can be everyone’s hero tomorrow morning.” 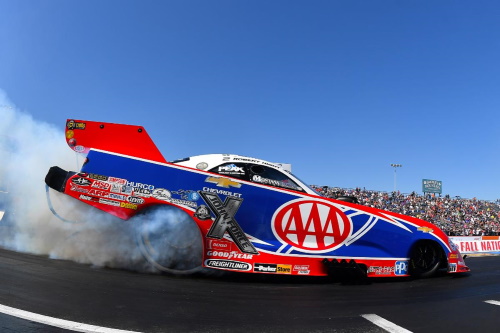 Two-time Funny Car world champion Robert Hight and the AAA Texas Chevy Camaro SS team will start eliminations from the No. 2 spot after powering to a stellar 3.851-second pass at 335.07 mph Friday night. The Jimmy Prock and Chris Cunningham led team pushed the limits of their Chevy Camaro but overpowered the track on both passes to run 5.981-seconds and 114.05 mph and then at 4.562-seconds and 181.11 mph.

The racing veteran will be chasing his third consecutive win at the Motorplex but will first have to defeat Jim Campbell in round one of eliminations.

“Jimmy Prock and Chris Cunningham, they really wanted to see what they could get out of the track today. We pushed it up there in both sessions and ended up smoking the tires in both but we have the data we need for tomorrow and we’ll pick up where we left off from last weekend,” said Hight. “I think we’re in a really good spot and I feel confident going into tomorrow. We’re coming off a win in Charlotte and we’d really like to continue that tomorrow on race day.”

Eliminations at the AAA Texas NHRA FallNationals are slated for 11 a.m. on Sunday with television coverage on FOX Sports 2 (FS2) at 2 p.m. ET.