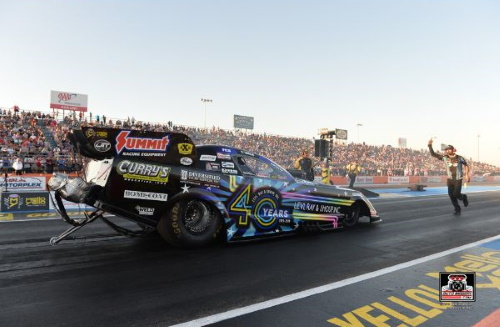 ENNIS, Texas (October 19, 2019) – The Levi, Ray and Shoup Ford Mustang nitro Funny Car was pleasingly quick in Saturday qualifying at the AAA Texas NHRA FallNationals, and that makes driver Tim Wilkerson exceedingly happy. Wilkerson, qualified in the No. 7 position, will race Shawn Langdon in the first round of eliminations.

Wilk’s trusty Ford Mustang with the sleek 40th anniversary Levi, Ray and Shoup paint scheme was set on kill on the second day of qualifying at Texas Motorplex, allowing its driver to claim bonus points in the two finals sessions as one of the quickest cars. Wilkerson’s best time of the weekend was a 3.895-second pass at 315.05 mph that he laid down in the fourth and final session on a warm day in Ennis, just outside of Dallas.

“It was a little faster last night, but this last run here was kind of what it should have done if we hadn’t gotten out of the groove and smoked the tires,” said Wilkerson, referring to the 4.048 he recorded in the quick session. “The first run today was pretty good, we were third-quickest of the session this morning. I feel like we have something for ’em, if our car will keep cooperating. It’ll be interesting.”

Wilkerson’s meeting with Langdon – as well as his start from the No. 7 position – is a carbon copy of what happened last weekend in Charlotte. There, Wilk got the win over his tire-smoking opponent and advanced to the quarterfinals.

“If we can get by first round, we’ll be okay – but Langdon is a tough draw,” said Wilkerson, the 2008 Dallas winner. “I don’t know how many times in a row you’re going to beat those guys, so we’re going to have to be on our game.”

Eliminations for the AAA Texas NHRA FallNationals will begin on Sunday at Texas Motorplex at 11 am CT.