In the Jr. Dragster classes, Brayden Davis joined his father, Travis, in the winner’s circle after using a superior reaction time to win the Coolshirt Pro Jr. Dragster presented by Thornton Motorsports final round, as he and James Paylor both ran 7.915 on a 7.90 dial-in. Mallory Logan scored the Gilbert Motorsports Top Jr. Dragster win, as opponent Connor Shields couldn’t make the call. 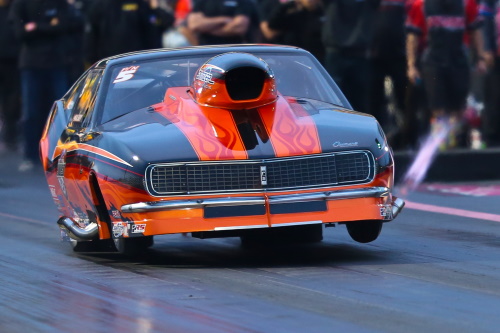 PRO NITROUS
Jim Halsey and his Fulton-powered ’68 Camaro held a firm grip on the Pro Nitrous field all season long, and the Maryland native added an exclamation point to his career-best season by clinching the championship, setting the ET record and winning his fourth race of the season. Final round opponent Jason Harris, the outgoing world champion, went red by .004, while Halsey sailed on to a record 3.613-second pass at 207.37 mph.

“For as long as I’ve been in it, it’s a lifetime goal to be a champion in a national organization like this,” Halsey said. “We ran IHRA for years, we ran ADRL. I’ve won Indy, I’ve won Shakedown, I’ve won Yellowbullet Nationals, but I’ve never won a big series championship against competition like we have here. It’s just awesome.”

“It’s just the best feeling in the world right now,” added Halsey, who thanked his team led by tuner Brandon Switzer and crew chief Eric Davis. “We’ve had an excellent year to start with, and to finish it off with the win, the championship and the record going into the winter, it’s pretty awesome.” 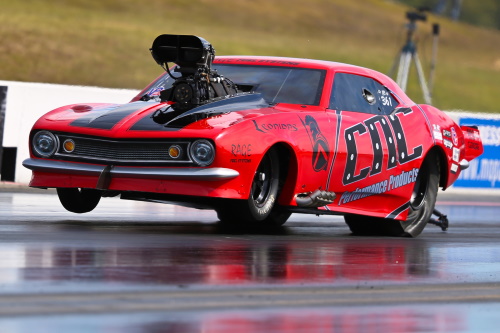 PRO BOOST
While the stars of Pro Boost were thinking about championships and world records, class newcomer Mike DiDomenico stealthily worked his way to the final round in just his second PDRA race of the season. There, he used a sizable holeshot advantage to take out No. 1 qualifier and record holder Randy Weatherford. DiDomenico drove his roots-blown CNC Performance Products ’68 Camaro to a 3.726 at 180.81 next to Weatherford’s 3.641 at 208.55.

“I didn’t feel any pressure going into the final round,” DiDomenico said. “We were just blessed to be at this point. I told my guys, ‘Win or lose, you guys did a fantastic job.’ We met or exceeded our expectations. Winning was just a bonus at that point. We didn’t anticipate anything like this. We had a lot of luck with us. We had a couple guys go red, and sometimes in racing you gotta have a little luck on your side. God was looking out for us a little today. I’m just overwhelmed.” 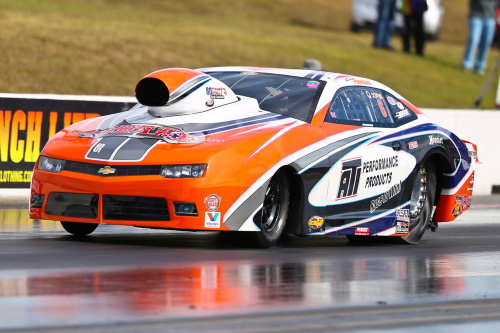 EXTREME PRO STOCK
Extreme Pro Stock competition was full of surprises and upsets at the World Finals, but no one was shocked when Chris Powers continued his record-setting, No. 1 qualifying performance into Saturday eliminations and all the way through to a final-round win. Powers in his Sonny’s-powered ATI Performance ’14 Camaro met No. 3 qualifier Dillon Voss in the final and recorded a 4.032 at 179.21 to finish ahead of Voss and his 4.798 at 128.75.

“It feels great, and to get the record at the same time for Mountain Motor, I couldn’t be any happier for the team and all the guys who help us,” Powers said. “It’s an impressive weekend, for sure.”

While Powers didn’t record the elusive first sub-4-second pass in the class – nor did anyone else – he did come close with his 4.007 in qualifying, which was backed up as the new record with his pair of 4.015s in the first two rounds. He defeated rookie Justin Kirk and JR Carr before facing Voss in the final.

“We definitely wanted to get [a 3.99],” said Powers, who thanked his team, Joe Cooper, Rob Bealko, Chuck Samuel, his wife, his son; and sponsors ATI Performance, Liberty Gears and Sonny’s Racing Engines. “Q3 was our shot to go out there and unload it. Today was all about just trying to make good, clean runs and win the race. We wanted to end the year on a really good high note, and we accomplished that. We’re really happy.” 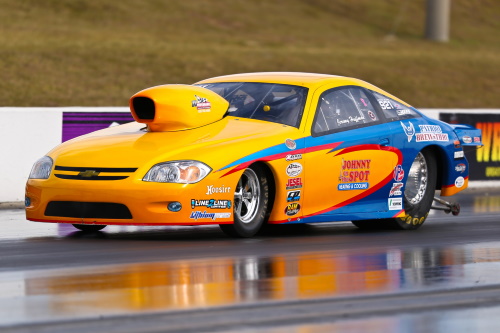 PRO OUTLAW 632
Jeremy Huffman experienced the best race of his early Pro Outlaw 632 career, qualifying No. 1 for the first time and racing to the final round for the first time. He followed through and got the win in his naturally aspirated, 3V Performance-powered ’10 Cobalt using a 4.271 at 165.76 to grab the win over back-to-back world champion Johnny Pluchino, who went .001 red with his 4.269 at 166.70.

“I really can’t explain how excited we are,” said Huffman, who thanked sponsors 3V Performance, Johnny on the Spot, Patriot Brew-Thru, Maxima Oils, Line2Line Coatings and Lithium Pros. “This is our first final round ever in a class this competitive, running against competition like Johnny Pluchino, the world champion the last two years. We’re so blessed to be here. We’ve had a lot of things go against us this year. We’ve hurt the motor 2-3 times, had some weird things happen. For all the hard work to come together like this at the end of the year, we’re just so excited.”

Huffman fired off a 4.219 at 167.12 to move past Vinny LaRosa in the opening round, then defeated championship contender Wes Distefano in the semifinal. 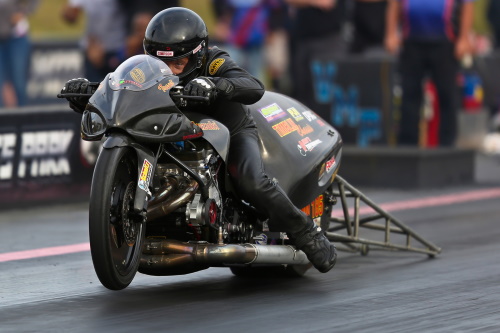 PRO NITROUS MOTORCYCLE
Travis Davis went into the World Finals with a shot at a second world championship, but he sat third in points behind defending world champion Ronnie “Pro Mod” Smith and Chris Garner-Jones. Smith lost first round and Davis beat Garner-Jones in the semifinals, allowing Davis to clinch the championship. He didn’t back down in the final round, riding his Timblin Chassis-built Suzuki Hayabusa to a 3.991 at 179.09 alongside Terry Schweigert’s 4.02 at 156.57.

Davis shared the winner’s circle with his son, Brayden, who won in Pro Jr. Dragster for the first time. The father-son duo won dual world championships in 2017.

“We’ve tried to get both of us in the winner’s circle, and one of us would win and the other would runner-up,” said Davis, who thanked Timblin Chassis, Drag 965 and the PDRA. “For him to win and me to win was a big highlight in our racing this weekend.”

OUTLAW 10.5
The Atomizer Racing Injectors Outlaw 10.5 National Championship Series racers joined the PDRA for the third time this season. Virginia’s own Jesse Lambert prevented No. 1 qualifier Mo Hall from running the table, as Lambert drove his twin-turbocharged ’04 Mustang to a career-best 3.875 at 205.94 in the final round to better Hall’s 3.901 at 192.82 in his Fulton-powered, nitrous-assisted ’07 Corvette.

TOP SPORTSMAN
Multi-time No. 1 qualifier Erica Coleman picked up her first Elite Top Sportsman win of the season in her nitrous-assisted ’68 Camaro. She slowed to a 4.206 on her 3.92 dial-in in the final round, but opponent Bruce Thrift broke out with a 4.079 on a 4.08 dial-in. Coleman raced past Randy Perkinson, Barry Daniluk and Jeremy Creasman before the final round, while Thrift’s road to the final included wins over No. 1 qualifier John Benoit, past world champion Dewayne Silance and Cheyenne Stanley.

The Top Sportsman 48 event champion was decided on the starting line in the sixth and final round when Ed Foley in his ’18 Mustang broke off the line, allowing Chad Tilley to cruise to a 4.483 on a 4.40 dial-in in his ’96 Beretta.

TOP DRAGSTER
Michael White in his ProCharger-boosted ’14 Maddox dragster was incredibly consistent throughout Elite Top Dragster eliminations, including a strong final-round victory over Carson Brown. White, the No. 2 qualifier, moved second but won with a 3.702 on a 3.69 dial-in next to Brown’s 4.139 on a 4.09 dial-in. White won prior rounds over Brian McHattie, 2018 world Chaz Silance and 2019 world champion Kellan Farmer. Brown defeated Nick Hamilton, Kathy Fisher and Michael Galofaro on his way to the final round.

The PDRA will celebrate its 2019 world champions at the annual PDRA Awards Banquet during the Performance Racing Industry (PRI) Show weekend in Indianapolis, Saturday, Dec. 14.