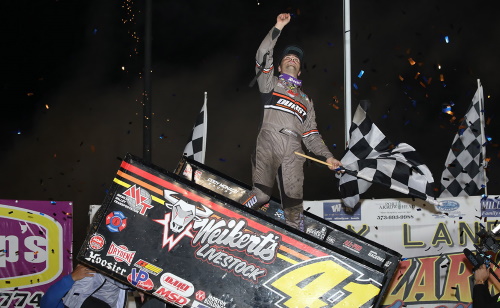 On Saturday night at Lake Ozark Speedway it was checked off Johnson’s list. His widow, Bobbi Johnson, promoted the Jason Johnson Classic with the World of Outlaws NOS Energy Drink Sprint Car Series.

The event started with rain but had a storybook ending.

Like a wave rising in the ocean before crashing down, the sea of people filling the grandstands simultaneously rose to their feet and applauded as David Gravel piloted the Jason Johnson Racing No. 41 car to Victory Lane.

Family, friends and team members – all with smiles and some with tears – flooded Victory Lane to congratulate Gravel and Johnson on the victory – reminiscent of Gravel’s Knoxville Nationals win in August.

“Just couldn’t have been a better night,” said a jubilated Gravel. “We’ve had two weeks this year that are storybook weeks. To get this done and win tonight… it might look like it’s fixed, but it isn’t. Sheldon (Haudenschild) made me work for that race.”

The Watertown, Conn. driver was fast all night, winning his Drydene Heat race – holding off a hard charging Haudenschild to do so – and finishing fourth in the DIRTVision Fast Pass Dash – won by Jason Sides, who also held off Haudenschild for the win.

When the 41-lap Feature when green Sides rocketed ahead of the field and threw his King Racing Products No. 7S car to the high side. He committed to the line in his pursuit for the win. If someone was going to pass him the bottom was their only option.

Haudenschild followed in line with Sides, riding the high side, trying to hunt him down. Behind them, Gravel worked his way by Brian Brown for third on Lap two and reeled in the top two every lap.

Sides got loose off turn two on Lap seven, allowing Haudenschild to close to his tail tank and Gravel to charge toward them both.

When the trio reached turn three Gravel slung his Mesilla Valley Transportation No. 41 car to the bottom of the track, sliding by Haudenschild and Sides for the lead. Gravel powered in front of them off turn four to officially take the lead on Lap eight, while Haudenschild also snuck by Sides to take second.

The battle was now Gravel versus Haudenschild. Both favored the cushion around the 1/3-mile speedway. Haudenschild’s NOS Energy Drink No. 17 was utilizing it better, though. He caught Gravel on Lap 14 and dove underneath him in turn three to steal the lead away from him.

Haudenschild led the next 11 laps, with Gravel keeping pressure from behind, before a caution spoiled the Wooster, Ohio driver’s night.

On the restart with 17 laps to go Haudenschild slid over the cushion in turn two and Gravel pounced. He charged underneath Haudenschild down the backstretch and sailed his car into turn three, gapping Haudenschild by two car lengths. 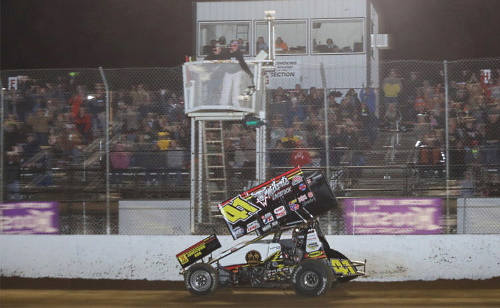 “Being on the outside I kind of pinched him (Haudenschild) a little bit,” Gravel said. “You’ve got to do those things to win races. I think I just had a little bit of an advantage on him on the double-file restart and was able to get the lead.”

Haudenschild kept Gravel in sight for the rest of the race but wasn’t able to put together another strong enough run to catch him.

“I would have liked to have raced in traffic a little bit more,” Haudenschild said. “I think it mixes it up and made a little bit more possibilities. When we were in clean air we were just ripping around there and waiting until we got traffic to get anything.”

Logan Schuchart had his own exciting race, charging from 11th to third – his second podium finish in-a-row.

“There in the beginning it was pretty interesting, we were battling back there with Brad (Sweet) and Donny (Schatz). That’s something you don’t want to get in between,” Schuchart said. “It was a good race. We were able to get up there on some restarts, pass some cars when we needed to.”

Sweet and Schatz – who are first and second, respectively, in the championship points ­­– battled around each other most of the night. Sweet had the better night, racing from 12th to fourth, while Schatz raced from 14th to eighth. Sweet is now 32 points ahead of Schatz with only four races left this season – only two before the World Finals.

Gravel’s win was his 10th of the year – first at Lake Ozark Speedway – and 49th career World of Outlaws win.

With Gravel and Schatz having 10 wins and Sweet having 16, it’s the first time since 2000 that there are at least three drivers with 10 or more wins in the Series.

“To hit double digits this year is great,” Gravel said about his win total. “It’s a hard feat to do on the World of Outlaws tour. For us to do that, it feels awesome.

“This is for Jason’s family. Put a smile on their faces tonight and hopefully for the whole week coming up.”

Bobbi Johnson called Gravel and the JJR team a “dream team” with how well they have meshed this year and the success they’ve had. Their victory helped put a period on the storybook ending for the inaugural Jason Johnson Classic – a big goal checked off Jason’s list.

“Tomorrow when you sit back and realize and think about all of the man hours and all of the time and all of the help and preparation, there’s a whole team that put on this deal and stood behind me,” Johnson said. “Just to feel like I checked off one of Jason’s things he always wanted to do… he had a black book and there’s a couple of things in there that’s not checked off, so that’s what I’m trying to do next.”

The World of Outlaws NOS Energy Drink Sprint Car Series on Friday, Oct. 25, and Saturday, Oct. 26, will be at Port Royal Speedway in Port Royal, Pa. for the Nittany Showdown. Get tickets and more information.

As always, if you can’t make it to the race, you can watch all of the action LIVE on DIRTVision.com! 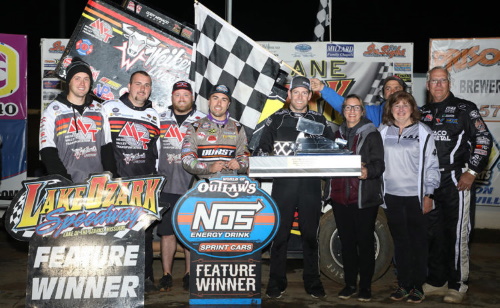