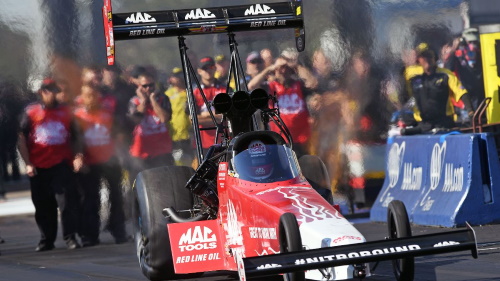 A first round full of upsets and surprise winners at the AAA Texas NHRA FallNationals kept Doug Kalitta and the Mac Tools Top Fuel team solidly in the Mello Yello championship picture with two races remaining. After two days of qualifying that saw Kalitta earn three bonus points and make some of the quickest runs in race day conditions the team was confident coming into the first round. They were giving up lane choice as the No. 10 qualifier but after last weekend’s run to the final from the same qualifying position everyone on the team was hopeful.

In the first round Kalitta was racing in the second pair and watched as rookie Jordan Vandergriff defeated Countdown contender Clay Millican. As Kalitta rolled to the starting line he knew facing the other top rookie of 2019, Austin Prock, would be a tough battle for the veteran.

Both dragsters took off and at the hit Kalitta was down on power as one of his eight cylinders was not firing. With a wounded race car Kalitta powered down the track to a 3.812 second pass at 316.15 mph. In the opposite lane Prock posted a track record speed of 334.40 mph and a solid 3.688 second elapsed time. At the time it was a devastating loss for Kalitta.

As the next rounds played out Kalitta could only watch and see how far behind he could potentially fall behind point leader Steve Torrence. In the pair of dragster immediately after Kalitta Mike Salinas, the No. 4 driver in points was ousted and midway through the session journeyman Top Fuel pilot Shawn Reed pulled off the upset of the Countdown stopping Torrence and essentially keeping Kalitta within approximately 30 points of the Top Fuel lead.

“That win by Reed was huge for this Mac Tools team,” said Kalitta. “We were in a tough spot and we really didn’t lose any ground this weekend. I would have loved to have gotten to another final but we dodged a bullet today. We are only 33 points out of the lead with two races left.”

Quotable:
Doug Kalitta on heading to Las Vegas: “We had a tough day today but I am ready to get to Las Vegas. This Mello Yello championship battle is going to be a lot of fun. I am glad these Mac Tools guys are in the fight. We are up to the task for sure.” 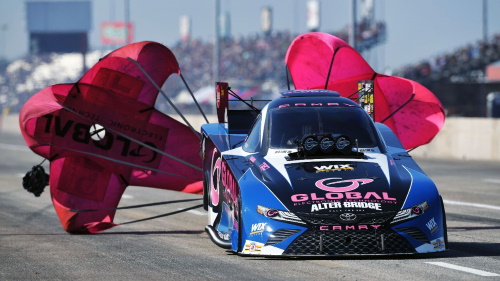 For Shawn Langdon and the Global Electronic Technology Toyota Camry the AAA Texas FallNationals was a feast or famine event. The No. 10 qualifier battled through qualifying and drew Tim Wilkerson as a first round foe for the second consecutive weekend.

Last week the second year driver was defeated by the veteran Funny Car wheelman but today Langdon got the upper hand upsetting the higher seeded Funny Car. From the jump Langdon had the advantage stealing a reaction time lead of .059 to .085 seconds and he never trailed in the race. That benefit sealed a hole-shot win for Langdon as his slower elapsed time of 3.925 seconds got to the finish line ahead of Wilkeron’s quicker 3.908.

“That was a big round for this Global Electronic Technology Camry,” said Langdon. “We need all the round wins we can get and I knew I needed to be quick on the tree. The guys gave me a good race car and I was able to get off the line first.”

In a quarterfinal round filled solely with Countdown competitors Langdon drew Mello Yello point leader Robert Hight as his opponent. The race was a prime opportunity for Langdon to stop Hight and close the gap on his first Funny Car championship. When the starting line Christmas Tree activated both Funny Cars took off with Langdon’s Toyota Camry taking a slight advantage. By half-track the 11,000 horsepower Funny Cars were neck and neck and by less than a car length Hight took the round win, 3.937 to 3.964 seconds at over 320 mph.

“That was just a close, close drag race,” said Langdon. “We fell off a little from the first round to the second round. If we could have duplicated that first round run we would be headed to the semifinals. It warmed up a little and it gets tricky when that happens. I am really proud of this Global Electronic Technology Toyota team.”

With two races left in the 2019 season Langdon and the Global Electronic Technology team are turning their attention to the west coast and races in Las Vegas and Pomona, California.

Quotable:
Langdon on racing at the Texas Motorplex: “This is a great race track. We had night time qualifying on Friday and that really set up the field as far as qualifying. Yesterday even on a hot track there were a lot of good runs. We got a little behind the eight ball but we got a win the first round today.” 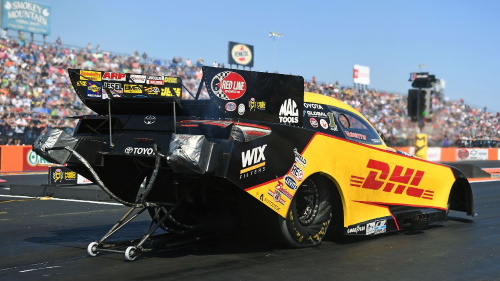 Todd and DHL Camry Out in Quarterfinals of FallNationals

For J.R. Todd and the DHL Toyota Camry Funny Car team a promising two days of qualifying saw last year’s FallNationals runner-up have his day cut short. On Friday and Saturday with two different weather conditions Todd and his team were the tops of the category earning qualifying bonus points in three of the four sessions. Heading into race day as the No. 3 qualifier Todd knew he could make up ground on the point leaders with a long day of win lights.

In the opening session against two-time Funny Car champion Cruz Pedregon Todd showed the capabilities of his team posting one of the quickest elapsed times of the first round. His 3.911 second pass at 327.19 mph was more than enough to get the win and advance him to the quarterfinals.

The second round was stacked with Countdown contending Funny Cars. Every pair of race cars had championship implications. Todd drew eventual race winner Matt Hagan and the pair of Funny Car champions put on one of the closest races of all the elimination rounds. Todd took a solid reaction time advantage grabbing .033 of a second in reaction time advantage (.067 to .096) but his elapsed time was .034 of a second slower at the finish line stripe putting him .001 of a second away from victory. Both race cars were hitting on all eight cylinders lighting up the scoreboard with speeds over 325 mph.

“That was a close drag race. You look at a race like that, which comes down to a couple thousandths of a second and there are so many things that factor into that run,” said Todd. “No one is hanging their head over here. We have an awesome DHL Toyota Funny Car. It will be tough but we still have a chance. We will need a lot of help but you never know in this class. Look at what happened today in Top Fuel. There are a lot of tough competitors out here.”

Quotable:
J.R. Todd on heading to Las Vegas: “We have a three race win streak going there. I would love to get a couple more wins this season and for sure keep that Vegas win streak alive. That is a great race track and I am looking forward to getting back there in a couple of weeks.” 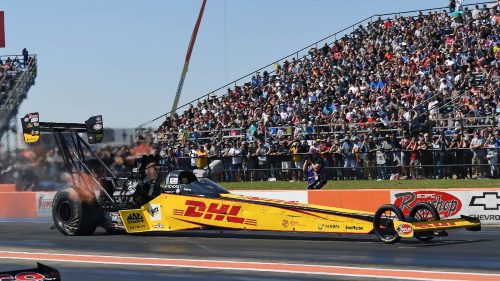 Crampton and DHL Have Tough Day at Texas Motorplex

In an upset filled first round at the AAA Texas FallNationals Richie Crampton and the DHL Kalitta Air Top Fuel dragster were looking for an opportunity to move up in the point standings. After two days of qualifying that saw the team making consistent runs they entered race day as the No. 9 qualifier.

Crampton and Antron Brown were facing off in the opening round of eliminations. They were the last pair of Top Fuel dragsters and had witnessed the elimination of the No. 1, the No. 2 and the No. 4 Top Fuel teams in the Mello Yello standings. Crampton knew this was an opportunity to make up ground on the leading race cars.

The DHL Kalitta Air dragster was on a strong run but as it reached half-track the Goodyear tires began to haze and Crampton began losing traction. The young Australian clicked off the power to his Top Fuel dragster to avoid further damage and Brown pulled away for the victory.

“We knew we needed to make an aggressive run and it was just a little too aggressive,” said Crampton. “We saw a lot of the teams ahead of us in points go out and I felt like today could have been our day. We have two races left and now we need to get some wins and we need some help.”

Quotable:
Richie Crampton on heading to the last two Countdown races: “We have a week off and then Las Vegas. There will be a lot going on with the race and then the SEMA Show. Our focus will be on the track and getting another Countdown win.”