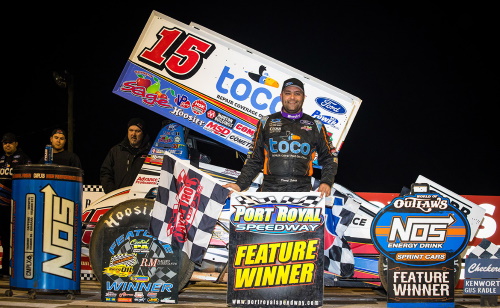 PORT ROYAL, PA (October 26, 2019) – Donny Schatz has spoken modestly about this year’s dramatic points battle with Brad Sweet. However, his on-track performance shouts anecdotes about it every race night.

Schatz won his 11th World of Outlaws NOS Energy Drink Sprint Car Series victory of the year, his third consecutive Series win at Port Royal Speedway and decimated Sweet’s points lead over him by 24 points due to Sweet finishing 12th – now Schatz is only eight points behind Sweet with three races to go.

“We just got to focus on what we do,” a modest Schatz said in Victory Lane. “There isn’t anything I can do to effect what he does. We never won a championship worrying about who we’re racing against or what they were doing. Obviously, what these (Tony Stewart/Curb-Agajanian Racing) guys are doing is working. They made all of the right changes to the car.”

The Fargo, N.D. driver has been the king of the “Speed Palace” ever since the World of Outlaws returned to the half-mile track in 2014. Since then Schatz has yet to finish worse than third.

He started the night in dominant fashion by winning his Drydene Heat race and the first DIRTVision Fast Pass Dash.

When the 30-lap Feature for the first night of the Nittany Showdown went green Schatz was a rocket. He launched ahead of the field from his pole position and held the top spot into turn one. Brian Brown was in hot pursuit behind him, though. 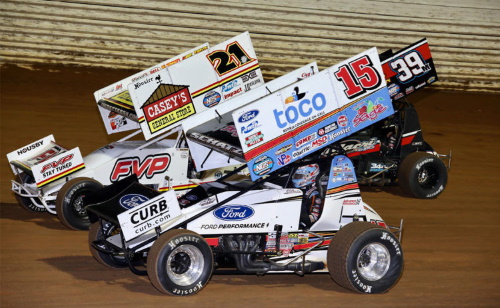 While Schatz ran low for the first lap, Brown ran high. The FVP No. 21 built momentum and speed around the top, charging to Schatz’s rear bumper off each corner. Brown eyed an opening to the outside of Schatz off turn four, but the 10-time Series champion slammed the door shut before Brown could sneak his bumper between him and the wall.

Schatz then moved to the middle of the track and began to pull away from Brown. Behind the top-two Aaron Reutzel had charged from sixth to third on the first lap.

The Toco Warranty No. 15 was in lap traffic by Lap eight, but the slower cars did little to slow Schatz down.

The battle for second heated up near the midway point with Reutzel putting pressure on Brown and eventually darting underneath him for second on Lap 12. However, a red flag for Danny Dietrich hitting the wall in turn two came out before the lap was completed and Brown held second.

On the restart Schatz, again, bolted ahead of the field and Anthony Macri charged to third with Reutzel having a bad start.

While Schatz pulled away with the lead, Macri grew faster as the race progressed. He passed Brown for second with five laps to go and reeled in Schatz. Time was not in his favor, though. The Dillsburg, Pa. driver had to settle for second – his first World of Outlaws top-five finish – with Schatz a car length away. Brown rounded out the podium in third.

“The car was pretty solid all night long,” Macri said. “About halfway through the Feature I could pretty much put the car wherever I wanted. That’s always nice. This thing was operating smooth tonight.” 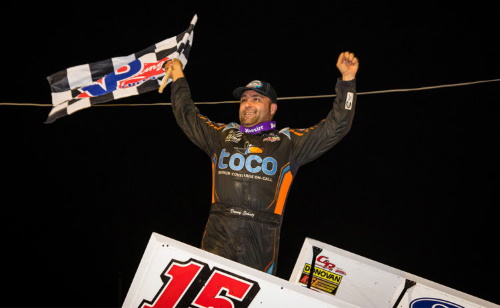 Schatz’s win was his 294th career Series victory and the second win in two weeks for the new Ford FPS 410 engine. The new engine’s capabilities were put to the test in the 30-lap Feature with fuel a potential issue.

“Thirty laps around this place with the way the conditions are was going to be questionable on fuel,” Schatz said. “They said, ‘Hey, you might want to conserve a little bit.’ I don’t know how much fuel we have left, but we made it. That’s the important part. Just the nature of the beast. These things pump a lot of fuel through them, a lot of air. We got a little extra air and fuel tonight with the Ford. Hats off to those guys. It’s been a fun project.”

Sweet was able to race from 18th to 12th on the fast track surface Friday night, but his performance wasn’t enough to withstand Schatz’s dominating run. The final night of the Nittany Showdown at Port Royal Speedway on Saturday will be Sweet and Schatz’s last chance to have the points lead before the final two races of the year at the World Finals in November.

“We’re running out of races to win, so it’s good to get one tonight,” Schatz said.

The World of Outlaws NOS Energy Drink Sprint Car Series on Saturday, Oct. 26, will return to Port Royal Speedway for the final night of the Nittany Showdown. The start times have been changed with the front gate and pit gate opening at 11 a.m., Hot Laps scheduled to start at 1 p.m. and Heat races scheduled to start at 2 p.m. Get tickets and more information. 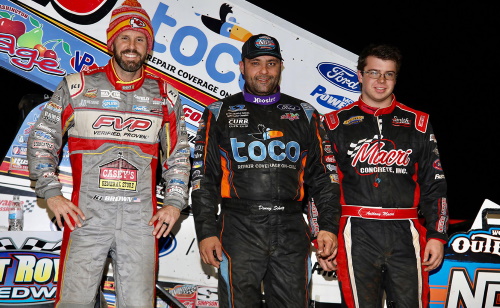 Photos courtesy of DB3Inc and Michael Fry via World of Outlaws