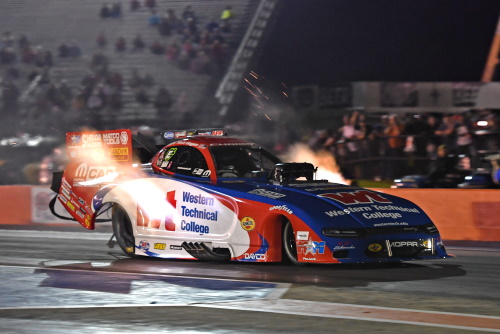 Auburn Hills, Mich. (October 30, 2019) – The 2019 NHRA Mello Yello Drag Racing Series Funny Car championship is going to come down to the outcome of the final two events of the season. Dodge//SRT Mopar drivers Matt Hagan, Jack Beckman and Ron Capps, all former Funny Car world champions, can enhance their chances of lifting the championship hardware again by hitting the jackpot in the Dodge NHRA Nationals Powered by Pennzoil at The Strip at Las Vegas Motor Speedway this weekend, Nov. 1-3, 2019.

The Don Schumacher Racing (DSR) trio ranks fourth, second and sixth, respectively, in the standings and each has a previous championship run in the past six seasons. A victory in the Dodge NHRA Nationals bodes well from a historical perspective also, with two of the previous three Funny Car champions clocking wins at the fall stop in Las Vegas. The success of the HEMI®-powered Dodge Charger SRT Hellcat Funny Cars in 2019, nine wins and 18 total final appearances, as well as in the Countdown, two wins and a runner-up, enhances their odds of tightening the points chase. 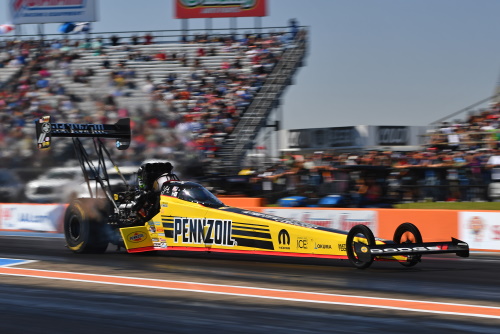 DSR’s Leah Pritchett remains alive in her quest for her first Top Fuel world championship. She ranks fifth in the standings and is 104 points out of first. A first Las Vegas triumph, along with early exits by the point leaders, would likely cut that margin in half and increase her shot at the title.

Closing the points gap in Las Vegas is important for the Dodge//SRT Mopar drivers. The final race of the 2019 NHRA season, the Auto Club NHRA Finals in Pomona, California, on Nov. 14-17, pays 1.5 times the points of the other races in the Countdown.

The Countdown started slow for two-time Funny Car champion Hagan, with second- and first-round defeats in Reading and St. Louis. Crew Chief Dickie Venables got things turned around on the Dodge Charger SRT Hellcat Widebody Funny Car in Charlotte as Hagan made a run to the semifinals, then picked up his third win of 2019 in the AAA Texas NHRA FallNationals at Texas Motorplex in the most recent event. His 32nd career Funny Car triumph was the result of consistency on race day as Hagan posted runs in the 3.90-second range throughout the day to score the first-ever victory in a Dodge Charger SRT Hellcat Widebody Funny Car.

Winning in the Countdown has been a key to securing the championship. In five of the previous six Countdowns, the champion has won at least one race. In four of those years, the eventual champion picked up three or more wins. Hagan won three times during his title march in 2014, and he may have to duplicate that run in order to erase the 112-point deficit he currently faces. 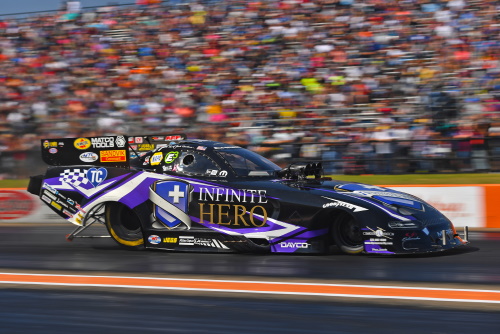 Beckman, the 2012 Funny Car champion, opened the Countdown with an impressive victory at the Mopar Express Lane NHRA Nationals at Maple Grove Raceway near Reading, Pennsylvania. The Infinite Hero Foundation Dodge Charger SRT Hellcat Funny Car was locked down en route to his 29th career triumph and first of the season after reaching five previous finals. After a tough first-round loss in St. Louis, Beckman and his DSR team bounced back in Charlotte earning the No. 1 qualifier position and advancing the final.

Through four races in the 2019 Countdown, Beckman has matched the final-round stats recorded during his 2012 championship campaign. Scoring another win and a runner-up would greatly increase his chances as he trails Robert Hight by 60 points heading into Las Vegas. 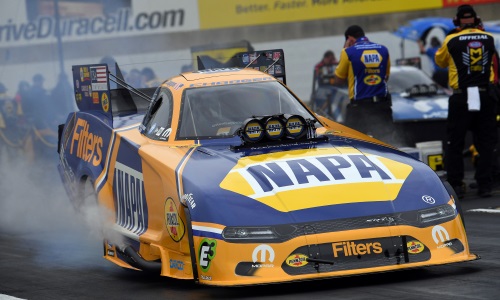 Capps, the 2016 champion, opened his quest for a second title with a new track record and the No. 1 qualifier in Reading. He advanced to the semifinals in the first race and then again in Charlotte, but he lost a tough first-round battle with Beckman in Dallas, which has him 135 points out of first. The best case scenario for Capps is to continue this year’s Countdown trend and become the fifth different winner in five races and also have the drivers in front of him stumble. 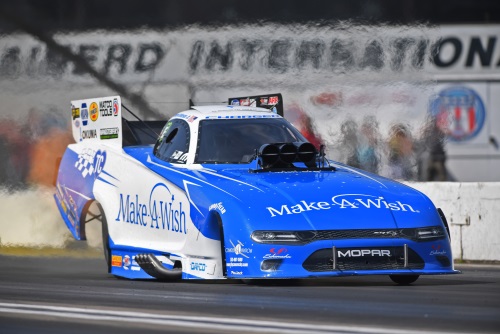 Despite being 194 points out of first, Tommy Johnson, Jr. doesn’t mind his longshot odds. After having the best regular season of his career that included a pair of wins behind the wheel of the Make-A-Wish Dodge Charger SRT Hellcat Funny Car, the Countdown has been a struggle. He has scored only two round wins in the first four events, but going his way are his recent late-season heroics. Coming on strong late seems to be part of his DNA as evidenced by concluding 2015 with a pair of runner-ups and winning the 2016 and 2017 season finales.

Mopar Career Automotive Program (CAP), through a partnership with Pennzoil, will host next-generation service technician students at The Strip at Las Vegas Friday, Nov. 1, as part of the “Assemble Your Future” initiative. More than 30 students from ATI’s Automotive Training Technician program are expected to attend and have the opportunity to interact with area FCA US dealership representatives and get an inside look at the NHRA, visiting with Hagan and Pritchett and touring the DSR pit areas.

Established in 1984, the program prepares students to begin their automotive technician careers upon graduation from a certified, two-year training institution, such as a university, college, community college or technical center. Currently, FCA has more than 9,000 active students enrolled in its Mopar CAP program, with students completing more than 100,000 class courses. There are an estimated 750,000 auto technicians working nationally, according to the U.S. Bureau of Labor Statistics. Across the industry, another 46,000 will need to be hired between 2019 and 2026 to meet increased demand.

As part of the NHRA YES initiative, more than 2,000 local Las Vegas high school students are scheduled to hear from Dodge//SRT Mopar driver Hagan, who will focus on the importance of math, science and other skills that can lead to new career opportunities.