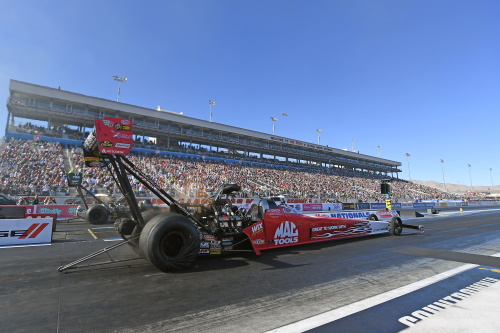 Doug Kalitta’s quest for his first Top Fuel Mello Yello world championship will come down to the final race of the season in Pomona. Kalitta had the race car to beat today at the Vegas NHRA Nationals but a catastrophic turn of events in the semifinal round derailed his race day. As the No. 9 qualifier Kalitta battled through two tough first round wins to set up a race against point leader Steve Torrence. With one race to go on the season Kalitta who sits No. 3 in the Mello Yello points will only need to overcome a 55 point deficit at the Auto Club Finals where each round of racing will be worth 30 points.

At the start of race day the Mac Tools team was the first race car down the track facing off with Shawn Reed. Two weeks ago Reed upset point leader Steve Torrence in the first round at the NHRA FallNationals. Kalitta and his Mac Tools team were not taking him lightly. In a very close race Kalitta took the win leading from the starting line to the finish line.

“That was a big win for us. I have to take my hat off to my whole Mac Tools team,” said Kalitta from the top end. “The nerves are up and we are all just trying to make it happen. It is great to see all these fans out here. I am sure they are going to see a good show today.”

In the second round Kalitta had to take on the event No. 1 qualifier Leah Pritchett. Once again Kalitta was in the first pair to start the quarterfinals. Kalitta took a big starting line advantage and just flew down the race track in front of a tire smoking Pritchett. Kalitta’s winning time of 3.737 seconds was enough to put the pressure on the rest of his Countdown opponents.

“It is getting fun out here for sure. The guys are doing an awesome job on this Mac Tools race car going down the race track like that. We have to just keep going A to B. We have a lot of support out here from Mac Tools, Global and Toyota and we are trying to do well,” said Kalitta after second round win.

In a dramatic semifinal round Kalitta suffered a mechanical malfunction on his burnout which deployed his chutes and shut off his Mac Tools dragster after his burnout. The driver he was chasing in the points was able to make a single run to the final.

“I don’t know what happened,” said Kalitta. “I was going forward and the thing just shut off. It is just real unfortunate. We were definitely going to give it our best out there to see if we could get by Steve. We are just going to drag it out to Pomona and just go after the championship there.”

Quotable:
Doug Kalitta on heading to Pomona in third place: “It will be a battle for the championship. We knew it would come down to the last race of the season. I am very excited to have this Mac Tools team on my side. We will all be ready to race for this championship.” 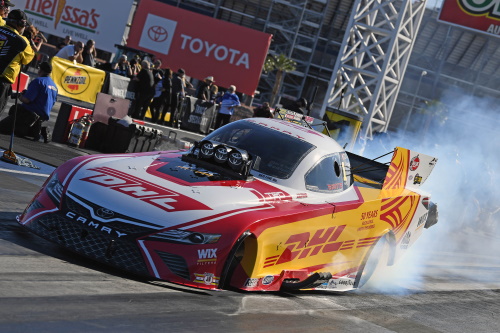 J.R. Todd Stopped Early in Quest for Fourth Win in a Row at Las Vegas

J.R. Todd, the reigning event winner and Funny Car world champion, was looking to keep a significant streak alive today at The Strip at Las Vegas Motor Speedway. Todd had won the previous three NHRA national events at the race track located 15 miles north of Las Vegas. During qualifying Todd posted quick elapsed times including a blistering 3.856 second run on Friday night which secured him the provisional No. 1 spot. On Saturday Todd and his DHL Toyota Camry ran a solid 3.902 second run in the third qualifying session but in the final session his race car overpowered the track looking for a good race day tune up.

Todd entered race day as the No. 4 qualifier and a match-up against Jonnie Lindberg and the Jim Head tuned Funny Car. In an amazing side by side race Todd and Lindberg gave the near capacity crowd one of the closest races of the day.

Todd took an advantage off of the starting line and was pulling away at the sixty foot mark but Lindberg began making his own move. As both race cars neared the halfway mark Lindberg pulled around Todd and held the advantage at the finish line stripe. Todd lit up the scoreboard with a strong 3.913 second run at 327.90 mph against Lindberg’s impressive 3.893 second run at 326.00 mph. Lindberg’s previous best elapsed time at the Vegas NHRA Nationals was 3.943 seconds.

“That was a tough race,” said Todd. “We had a great race car and I felt like I had him off the line. They just made a great run. I knew that if we won this race we could still be in the hunt for the championship. Now we are focused on a strong finish to the season and getting as high as possible in the point standings. There is one more race we can win this season and we are going to put all our energy on that. I have a lot of supporters from DHL and Toyota and we are going to keep fighting the rest of the season.”

With one race left Todd will head into Pomona and the Auto Club Finals in seventh place in the Mello Yello point standings. He will be focused on winning the final race of the season again and jumping into the Top 5 to wrap up a solid title defense.

Quotable:
J.R. Todd on heading to the Auto Club Finals: “We will have a lot going on in Pomona. We will be running the 50th anniversary DHL Toyota Camry again and I want to get a win for DHL and Reg Kenney. If you win the last race of the season that gives you momentum going into the off-season and 2020.” 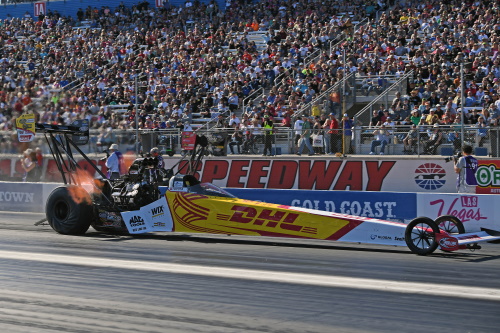 Since Richie Crampton opened the Countdown with a win at Maple Grove Raceway the DHL Kalitta Air Top Fuel dragster has been battling on race day. The young Australian has been strong in qualifying throughout the Countdown and that success continued this weekend at the Vegas NHRA Nationals. Over two days at The Strip at Las Vegas Motor Speedway Crampton made solid runs and went into race day as the No. 7 qualifier.

“We were ready for a long race day today,” said Crampton. “Our runs in qualifying gave us a lot of info and we were also working with teammate Doug Kalitta’s team sharing info. Those guys are tough and we just got a little too aggressive.

Crampton and teammate J.R. Todd are racing commemorative 50th anniversary DHL race cars. The cars were unveiled before the race and during the event fans were thrilled to see the new look race cars.

“We have a great relationship with DHL and I am really proud to represent them. The cars look great and we will be doing everything we can to get this DHL Kalitta Air dragster into the winner’s circle at Auto Club Raceway in Pomona,” added Crampton.

Quotable:
Richie Crampton on wrapping up season in Pomona: “We are going to head to Pomona in two weeks completely focused on winning the last race of the season. We have the DHL specialty car and we also want to finish the season on a high note. It would be great to win the first race and last race of the Countdown.” 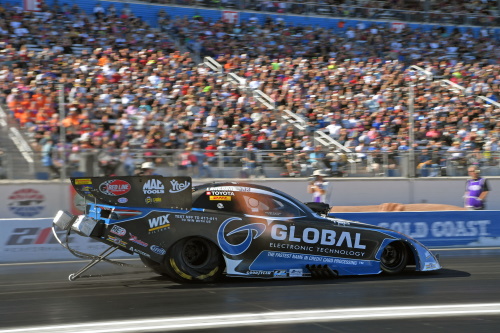 During the first two days of the Vegas NHRA Nationals Shawn Langdon had one of the most consistent and quick race cars at The Strip at Las Vegas Motor Speedway. The Global Electronic Technology Toyota Camry posted four consecutive qualifying runs between 3.928 and 3.861 seconds. During the final qualifying session Langdon laid down the third quickest Funny Car run of the session, picking up one valuable qualifying bonus point. On Sunday Langdon rolled into race day as the No. 5 qualifier with a match-up against veteran Cruz Pedregon.

Both Funny Cars staged and as the starting tree activated Langdon got the jump off the starting line but that was the only advantage the St. Louis national event winner experienced. His Camry Funny Car immediately jumped up on the Goodyear slicks and overpowered the race track. The second year driver gathered up his race car and got back on the throttle but he was unable to regain momentum and lifted as he watched Pedregon pull away for the win.

“I don’t know what happened on that run,” said Langdon. “I feel like I got the jump on the tree and then it really jumped up on the tires. I tried to pedal it but there was no way I was going to catch him. I know Del and Nicky are going over everything. We have no idea why it did that. We made four great runs in qualifying and I had a lot of confidence we were going to get our second Countdown win.”

The first round loss was tough for Langdon who was looking to close the gap on the Funny Car point leaders with one race remaining. Heading to the Auto Club Finals he will be looking to pick up another Countdown win and move up to the top half of the Top Ten.

Quotable:
Langdon on heading to Auto Club Finals: “You want to win the last race of the season whether it is for a championship or just so you have a win going into the off-season. This Global Electronic Technology Toyota is going to try and end the season on a high note.”