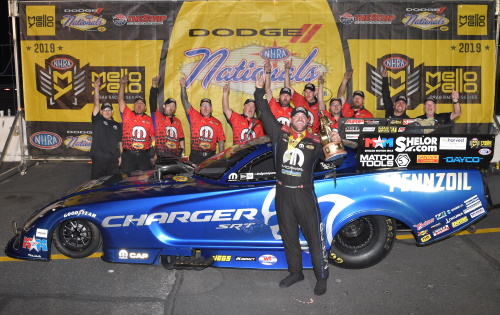 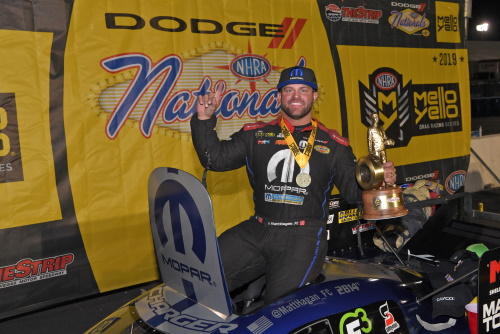 Hagan, who started the day in the seventh qualifying spot, beat Jonnie Lindberg in the final round with a run of 3.876 seconds at 331.36 and closed to within 56 points of the top position in the Countdown to the Championship. The victory also marked the 10th time in 23 events where a Dodge Charger SRT Hellcat came out victorious.

“This was an incredible effort by my Dodge Mopar guys here this weekend,” said Hagan, following his fourth win of 2019. “This is the Dodge NHRA Nationals. The second to last race of the season. And you have everyone from the president of Mopar here to all the people beyond us that are out here for SEMA. It’s one you need to win. We had some lady luck on our side this weekend and it all worked out. I can’t thank everyone that makes this possible enough. It was just a phenomenal job by (crew chief) Dickie Venables and my guys. We just won the Dodge NHRA Nationals and we can’t wait to get to Pomona.”

Hagan’s win capped an exciting weekend by the Mopar and Dodge//SRT teams in Funny Car and Top Fuel fielded by Don Schumacher Racing (DSR). The day began with Leah Pritchett atop the Top Fuel ladder after she set the quickest lap in track history during qualifying on Saturday in her Mopar dragster, and Jack Beckman as the top qualifier in his Infinite Hero Foundation Dodge Charger SRT Hellcat Funny Car, resetting the track records for speed and elapsed time during qualifying.

The weekend’s results put Beckman and Hagan within close striking distance for a Funny Car world championship at the final event of the 2019 NHRA season in Pomona, California, in two weeks. 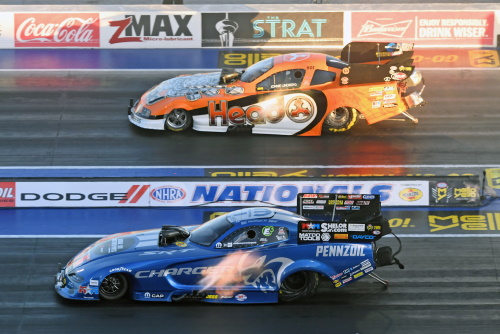 Hagan stormed to his fourth career final in the Dodge NHRA Nationals, first taking out fellow Dodge Charger SRT Hellcat racer Paul Lee with a run of 3.909 seconds. Next, he snapped a four-race losing streak versus his DSR and Dodge//SRT Mopar teammate Tommy Johnson, Jr., posting his best pass of the weekend, 3.869 seconds. The semifinal against Bob Tasca III was a rematch of the final in Dallas two weeks ago and the results were the same with Hagan turning on the win light to reach his third consecutive final in the fall Las Vegas race and sixth final of the season. The two-time Funny Car world champion flexed his muscle in the final, leaving first and driving away from Lindberg with his fourth consecutive run over 330 mph to secure his 33rd career victory.

Beckman entered the race weekend with his sights on inching closer to the top in the Countdown standings. The 2012 Funny Car champion trailed by 66 points after resetting both ends of the track record during qualifying in the Infinite Hero Foundation Dodge Charger SRT Hellcat Funny Car. He carried that momentum into the first round and took out Terry Haddock. He had the matchup he hoped for in round two, facing Countdown leader Robert Hight. A holeshot victory advanced him to his 12th semifinal of the season. His bid to the reach a third final during the Countdown came up short when he was on the losing end of a holeshot victory by Lindberg.

Beckman moves into the final race of the 2019 season in second place, 46 points out of the lead.

Ron Capps faced Tasca in the opening round and the race was determined at the starting line after both made identical runs of 3.911 seconds. Capps in the Pennzoil Synthetics NAPA Dodge Charger SRT Hellcat Funny Car got off the starting line in .080 seconds but lost on a holeshot with Tasca winning by 0.0127 seconds (about 6 feet). Capps, the 2016 Funny Car champion, still has a mathematical shot at a second championship but will need a lot of luck to outpoint the five drivers in front of him.

In Top Fuel, Pritchett won her first-round race, driving her Mopar Dodge Top Fuel Dragster past Cameron Ferre despite having cylinders out throughout her run of 3.869 seconds at 310.55 mph. Her day ended in the second round as Pritchett’s tires smoked early in the run and, despite pedaling it twice, she fell to Doug Kalitta.

Pritchett trails Top Fuel leader Steve Torrence by 135 points heading into the Pomona finale. A driver can get a maximum of 191 points at the season-ending race.

In Super Stock, Hoven piloted his SS/BA 1965 Dodge Coronet to the semifinals using a dual 426-cubic-inch HEMI V-8 under the hood. His day ended when the Nazareth, Pennsylvania, racer red-lighted by a mere .001 seconds. He will receive

The Dodge Top Finisher award, now in its third year, awards $500 to Stock Eliminator and Super Stock drivers who advance the furthest behind the wheel of a Mopar-powered Dodge, Chrysler or Plymouth race car at all 24 NHRA national events.

“To go from thinking we weren’t going to be in it to now being right in the thick of this hunt is incredible. I’m really excited and fired up right now. When you have that opportunity going to Pomona to win a world championship, that is why we do this. I love winning races but it’s about this hunt for a championship. It makes me want to come in and work and dig and just keep my nose to the grindstone and turn on win lights. I’m just so proud of my team. We struggled to start the Countdown and they never quit. They rise to the occasion. I wish we were racing in Pomona tomorrow.”

“It’s a gut punch. There’s no other way to spin it. The car did its job, the crew did their jobs and I just flat didn’t do my job. I started to stutter-step against (Robert) Hight in the second round and caught myself, and then you try and get your head back in the game and I was just slow on the tree in the semis. If I were two-hundredths better on the tree, we would’ve won that race. That’s what I get paid to do. It’s a tough loss to absorb and it could have major implications at Pomona. If we had won that round we’re within one round going into Pomona. Now we have to go two rounds further unless we can dominate qualifying and Hight stumbles. And Hagan is right back in the race now, too. It’s going to come down to four or five cars in Pomona and I need to get my act together. The Dodge Infinite Hero team deserved a better performance from me.”

“We had a tremendous Dodge Charger SRT Hellcat this weekend. It was a good comeback after struggling a bit for a few races. We want to finish this season on a high note and we did a good job of that this weekend. It’s unfortunate we had a great car and didn’t make it to the finals. I feel confident going into Pomona that we can run really well and get back to the finals and end this season with a win. I’m looking forward to getting there.”

“Talk about a roller-coaster of a weekend. From a track record and No. 1 qualifier to a crazy day of eliminations. We had a cylinder out at the step-in in round one. Cameron Ferre gave us a run for our money but we were able to put on the win light. We had a lock-up lever that broke at the hit in the second and all of that power was applied to the tires immediately and that’s why we smoked them. There’s nothing we could’ve done differently in round two. Our championship hopes are pretty much dashed but we’re going to be fighting extremely hard to finish 2019 strong.”

“It’s heartbreaking. We had a great scenario in Dallas by facing someone in front of us in points and couldn’t take advantage of it. We were OK in qualifying here in Vegas but (crew chief Rahn) Tobler was still trying to find what was giving him fits in the clutch department. The guys worked late into the night last night and they found the issue. We had a great race car in round one. Moments like that are when you have to be at your best and unfortunately I left the starting line second. I didn’t have a bad light but he had a great light and those are the moments that really hurt as a driver. We’ll pack it up and go to Pomona.”

Up Next: Auto Club NHRA Finals

The Countdown to the Championship will conclude in two weeks with the 55th annual Auto Club NHRA Finals Nov. 15-17. Hagan, a three-time winner of the fall event at Auto Club Raceway at Pomona, will look to close the Countdown with three consecutive triumphs and claim his third Funny Car world championship.